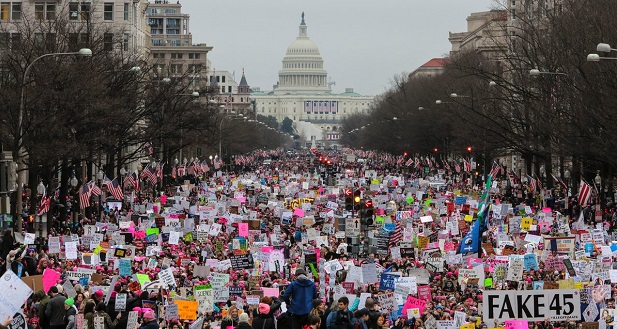 Often credited to Mahatma Gandhi, the above quote actually stems from trade unionist Nicholas Kleinâ€™s 1918 address to the Amalgamated Clothing Workers of America in Baltimore. His address came at the height of, now, much celebrated protest action opposing conservative labour policies in the US.

Well over a century later, this very country finds itself rife with activism opposing not just the regressive politics of the newly elected presidency, but the president himself. Nationwide, many have taken to the streets since Donald Trump was elected into the White House desperately trying to halt the reversal of progress made under the Obama administration.

Cynics question the point of protest after the fact, insinuating that it is too late for real impact since the new administration is well in its legal right govern the country as per the agenda it set out during its campaign for office. They donâ€™t seem to understand that democratic participation extends beyond the ballot paper and that protest plays a crucial part in the balance of power in any democratic society.

The Womenâ€™s March on Washington, which took place on 21 January, is reported to have been the biggest demonstration in US history. If the estimate by crowd scientists quoted in New York Times is anything to go by, then over 450, 000 people showed up to the nationâ€™s capital alone, never mind the hundreds of thousands who showed up at â€˜sister marchesâ€™ in other major cities.

â€œA Metro official said that more than a million rail trips were taken Saturday, the second-highest day in its history after Barack Obama’s first inauguration in 2009,â€ it reported, contrary to what the Trump administration would like us to believe about attendance of his inauguration outnumbering both aforementioned events.

Its mandate, as per the marchâ€™s official website, was simple: â€œThe Womenâ€™s March on Washington will send a bold message to our new government on their first day in office, and to the world that women’s rights are human rights. We stand together, recognising that defending the most marginalised among us is defending all of us.â€

It employed the age-old strategy of mass action to make sure concerns about plans to cut back funding of sexual and reproductive healthcare, and disregard Obamaâ€™s transgender bathroom decree, as well as disparities in wages between men and women in the country.

â€œIn the spirit of democracy and honouring the champions of human rights, dignity, and justice who have come before us, we join in diversity to show our presence in numbers too great to ignore.â€

You see, these protestors understand something that the cynics do not: the power of disruption.

With hundreds of thousands of people crowding the streets at your workplace, good luck making to your desk on time, good luck getting through meetings with the buzz of chanting right outside your window, and good luck trying to get lunch.

Protests are disruptive so that you have no choice but to engage. A demonstration like the one witnessed on Saturday is literally that: a demonstration of power to disrupt, as well as the extent of this disruption. Such a disruption in the productivity of a city like Washington DC could have grave consequences for the entire nation. Even if Trump decided to work off site, not many others would have that luxury.

In South Africa, we are all too familiar with this, with the value on our currency plummets at the simple threat of disruption to productivity. We witnessed this when nationwide student protests calling for free education broke out in 2015; and again, when protests calling for our president to resign erupted two months later.

At that point, when a demonstration begins to have a ripple effect, the issue consequently begins to affect more than just protestors in the street. Everyone becomes affected by the matter and everyone benefits from its resolution, and everyone calls for a resolution to be met.

There are already to plans to intensify protest action over the next 100 days, leading up to a second march in April, since the Trump administration seems undeterred with the signing of an executive action on Monday, barring international non-governmental organisations supporting abortion from receiving US funding.

However, as the protest becomes louder, it will be harder for the government to ignore. In the words of renowned Australian anti-nuclear activist Helen Caldicott, â€œSometimes it’s appropriate to scream at them,â€ especially when talking falls on deaf ears.

Angelo C Louw is the Advocacy Officer at Studies in Poverty and Inequality Institute (SPII). He is currently a Fulbright/Hubert H. Humphrey Fellow based at the University of Maryland near Washington DC and writes in his personal capacity.