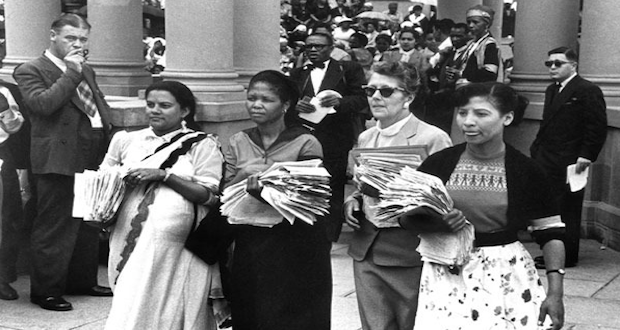 Helen Joseph, Rahima Moosa, Lilian Ngoyi and Sophia Williams led a march of aroundÂ 20 000 South African women (of all races) to the Union Buildings to protest against the proposed “pass laws” of the apartheid government.

If you forgot, pass laws were those special IDs that black people had to carry during apartheid.

Anyway, the women reportedly leftÂ petitions containing 100 000 signatures outside prime minister J.G. Strijdom’s office. He did not arrive to receive the petition (the lousy lout!).

The women stood silently for 30 minutes and then started singing a protest song that was composed in honour of the occasion: “Wathint’Abafazi Wathint’imbokodo!” (“Now you have touched the women, you have struck a rock”).

Historian Cherryl Walker, writing about the event in 1991: “Many of the African women wore traditional dress, others wore the Congress colours, green, black and gold; Indian women were clothed in white saris. Many women had babies on their backs and some domestic workers brought their white employers’ children along with them. Throughout the demonstration the huge crowd displayed a discipline and dignity that was deeply impressive.”

Is Women’s Day/Women’s Month important to you? Let us know!Â