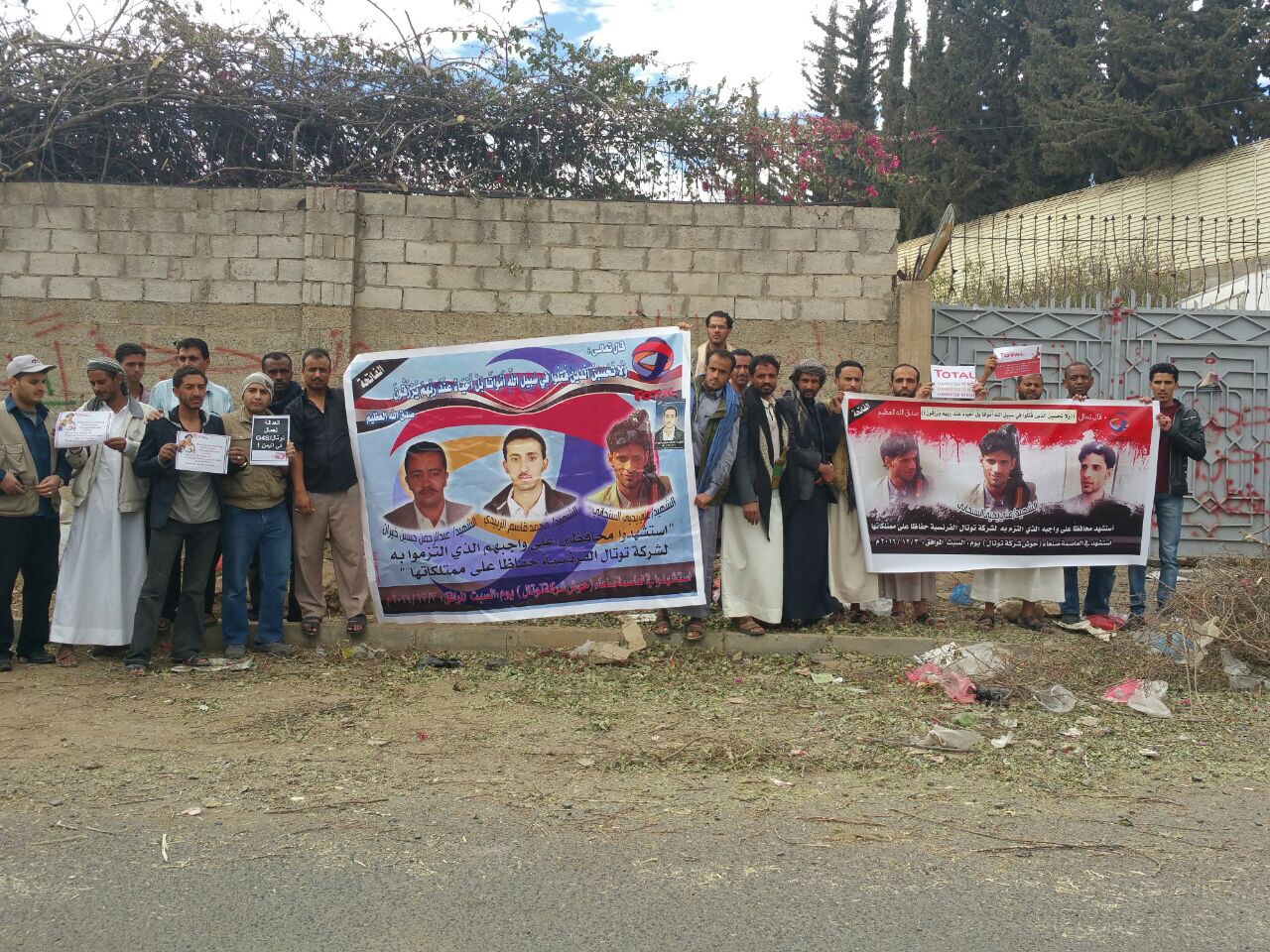 The war in Yemen has not only destroyed the lives of tens of thousands of civilians; it has also created a landscape whereby multinational corporations have been allowed to behave like local thugs. Energy company Total and G4S have denied wages to hundreds of workers in Yemen, leaving entire families starving and destitute as the country continues to collapse under the weight of a horrific war.

The French energy giant Total has been active in Yemen for more than 25 years. During this period, the protection of its facilities and installations has been done by workers employed as security guards via a subcontract with the British company G4S.

G4S is the largest security firm in the world, and of notorious reputation.

It was named a â€œserial abuser of human rightsâ€ by the British trade union UNITE for its involvement in countless scandals of human rights abuses worldwide, ranging from the torture of prisoners in Guantanamo to its complicity with the Israeli occupation of the Palestinian territories.

After having fostered generous profits through the use of Yemeni workers for years in peacetime conditions, these two companies have used the circumstances generated by the war in 2015 to do a hit-and-run wage robbery, assuming they could get away with it thanks to the international media blackout on Yemen and to the dysfunctional and collapsing state infrastructure. At least 10 000 people have been killed since the war began in March 2015.

As a result of the war, Total and G4S halted most of their activities in Yemen in 2015, but did so with utter disregard to the countryâ€™s labour legislation.

Total and G4S left Yemen without giving any compensation, or even any notice to the 208 security guards who were working under their authority.

â€œI did not know that the two companies had left Yemen. No notice from any competent authority or the government reached me to inform me that the company was about to leave,â€ said Rabbi Atiah, who worked as security agent for eleven years.

â€œI was surprised that Total and G4S had left Yemen without any knowledge or a noticeâ€.

Some local workers employed by Total, such as the drivers hired via a local group called Almaz, were notified of their redundancy by text message.

The G4S guards, for their part, were not notified at all.

â€œAt the end of December 2015, it is by watching TV that I learnt that Total had left Yemen,â€ says Mohsin Omar Almashdali, also a longstanding Total/G4S security worker.

Following a judicial procedure before the Labour Arbitration Commission of Sanaâ€™a, the Yemeni capital, the two companies were ordered in December 2015 to pay the workersâ€™ wages and other rights until the termination of their contracts. The guards were ordered to continue protecting Total buildings until this materialised â€“ but the court decision was wilfully ignored by both companies.

Local authorities, corrupt to the bone, have unsurprisingly done nothing to enforce these decisions, and workers have fought ever since to demand their rights. Some workers, under duress and out of desperation, have accepted money to stop the struggle.

However, to this day, 115 of them continue to work without pay.

They have also continued to fight for their wages, standing firm, holding several street protests in Sanaâ€™a, despite the ban on demonstrations imposed by the Houthi rebels who took over the capital at the end of 2014.

They have also resisted the mafia-like intimidation methods used to silence them, which have often included death threats and kidnappings by armed gangs directly connected to the management of these companies.

Last December, Mohammad Alzubide, Ali Al Sanhani and Abdurhaman Kieran, three security guards in their twenties, were shot dead by an armed gang as they were working on court-mandated duty protecting a Total compound involving 50 electricity generators in Sanaâ€™a.

Eyewitnesses say the shootings were carried out by armed men belonging to Total and G4S. It is an allegation that has been made before.

â€œThe responsible [parties] are Total and G4S, because they wouldnâ€™t want to pay the wages and the last labour rights by law,â€ Abdulalim Hamoud Mohammed, a supervisor with the security firm for the past eight years, said.

â€œThe killers are running free because Total and G4S are paying a lot of money to hide the crime; they are also exploiting the warâ€.

But G4S have denied any link with the local entity trading under its name.

â€œThe entity trading in Yemen is not a G4S Company. The company is trading under Yemen management using the G4S name unlawfully and in breach of demands requiring them to cease,â€ Caroline Skinner, the Regional General Counsel of G4S Middle East & India, said in an email.

This may well be true. But there are two problems. First, this cannot exonerate the company from the initial complaints of unpaid wages. And second, it does not explain why, to the best of our knowledge, G4S has not sued the fraudulent company.

Could this be related to the fact that the mercenary job conducted by the â€œfakeâ€ G4S is suitably serving the interests of the original company, in silencing the voices of workers who have grievances towards that very company? In any case, indications of a direct involvement of all these firms in using violence against the workers abound.

A genuine investigation is necessary to formally connect the dots, in order to apprehend and prosecute the individuals guilty of having stolen the three young workersâ€™ lives.

But these companiesâ€™ powerful networks of influence have provided them with a licence to kill, facilitated by the climate of lawlessness in crisis-ridden Yemen.

In December 2016, the Committee for a Workersâ€™ International (CWI) launched a campaign to bring justice for the workers in Yemen, calling upon its supporters to help these workers bring their case out and to denounce these scandalous practices â€œby writing protest letters to the companies concerned as well as to the Yemeni authorities, to assist these workers in obtaining justiceâ€.

And the situation has certainly become very severe.

In a country hit by an economic embargo and on the verge of famine, this has become a life-and-death issue. The victims of Total and G4Sâ€™ criminal practices, along with their families who depend on their income, are facing desperate times.

Some of them have seen family members, including children, starve to death; others, incapable to pay their mortgages, have lost their homes. Some have sold their furniture to survive.

â€œWe are scared of hunger. Ramadan is going to come. Total should pay nowâ€, Abdulalim said.

Factoring the social and health insurances, the risk bonuses, and the annual holidays which were not paid before 2015, the two companies owe today the equivalent of about $27 000 to every worker.

In real terms, this is less than 1% of the annual wage of Totalâ€™s CEO, Patrick PouyannÃ©.

These two contrasting figures are not unrelated: it is to further enrich such a business elite that workers have been robbed and left to starve in one of the poorest countries on earth.

Up until today and since their employers halted their operations, the workers have received no communication or clarity from the two companies concerned. Total has not even bothered to respond to journalist enquiries.

What is happening to the Total/G4S workers in Yemen does not result from a few bad apples breaching business ethics, but is inherent to a system where the fruits of labour and the natural resources are usurped to inflate the wealth of private corporations.

In fact, the local staff from other foreign companies previously operating in Yemen, such as the workers of the Norwegian oil company DNO, have faced very similar scenarios of unlawful layoffs and wage theft.

The sense of impunity of such companies has to be stopped, in Yemen as anywhere else. That is why it is in the interest of workers around the world to stand in solidarity with the struggle of the Total/G4S workers – ignored, forgotten and erased by the world.

Cedric Gerome is an activist working in London for the Committee for a Workers’ International (CWI), a socialist organisation with a presence in over fifty countries. He has written extensively on workers and youth struggles in the Middle East and North Africa.