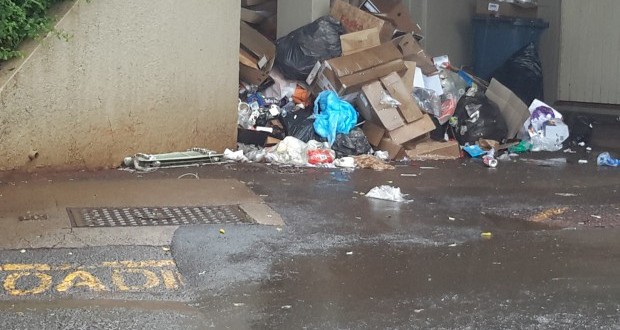 Students at UKZN’s Howard College have been protesting in support of a workers’ strike that began last week. However, their efforts were halted by private security and some students were arrested. QINISO MBILI rounds up what has happened so far.

Students at the UKZN Howard College remain unsettled after a peaceful protest was dispersed by a security tactical response unit. Several members of the SRC were arrested and shot at with rubber bullets. Students are protesting in solidarity with cleaners and security guards who have been on strike for a week. The students want the university to acknowledge the workersâ€™ grievances so that they can come back to work as dirt is piling up in the campus and toilets remain uncleaned.

The university took out an interdict on Tuesday against protesting students and striking workers.

A video emerged on ThursdayÂ showing security forces manhandling a female SRC member on campus. Some students allege that the security force, MI7, was targeting specifically people in the SRC.Â Some of the SRC members said they would be opening cases against MI7.

The SRC offices remained closed today as most SRC members had been arrested for supporting the strike and a number of them had been injured. However, classes continue as usual. Workers have the support of academics and students at the university â€œbecause they see that these workers are being exploitedâ€, says Moses Tsosetsi, secretary general of the South African Public Service Union (Sapsu), one of the unions in support of the strike. Tsotetsi says that one of the workersâ€™ demands is that they are employed full-time from the 1st of March. He says, â€œthe workers are determined that those companies, all the service providers must be firedâ€. Security has been tightened and the campus is getting dirtier after Thursday’s strike, with no indication of when the cleaners might come back to work. Tsosetsi says that no cleaning is taking place on UKZN campuses becauseÂ workers have said “no more”. Â The strike is expected to continue on Friday, and Sapsu is planning a march through the streets of Durban, the logistics of which have yet to be finalised.

IOL reports that the University registrar, Simon Mokoena, in an affidavit before court, said the demands of the protesters were â€œunaffordableâ€ and not in line with the Labour Relations Act.

All images by Qiniso Mbili