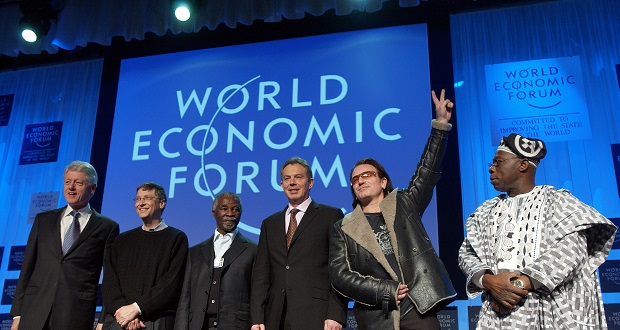 The World Economic Forum (WEF), is a gathering of influential people from the financial and business world, who come together to discuss the big issues facing the international economy. The meeting takes place annually at the end of January in the Swiss skiing town of Davos, which is where the meeting gets its name. This year will mark the 47th meeting, which will take place from 17 to 20 January 2017. The Daily Vox team looks at what the Forum is all about.

The #WEF17 theme for its annual meeting is â€œResponsive and responsible leadershipâ€. This theme was picked because of the way 2016 unfolded in terms of the rise of populism in the West, as well as the somewhat surprising election of Donald Trump and the Brexit disaster. Here, influencers will be discussing the way global leaders can respond to citizens who are feeling disconnected from government by the capitalist system, and rising inequality in the world.

â€œThe world around us is changing at unprecedented speed. At this tipping point, our traditional concepts of society, meaningful employment and the nation state are challenged, and many understandably feel insecure or even threatened. A new model of responsive and responsible leadership is needed to allow us to address the challenges the world faces, from security to the Fourth Industrial Revolution, with long-term, action-oriented thinking and solidarity on a national and global level,â€ says Professor Klaus Schwab, founder and executive chairperson of the WEF.

There will be approximately 3, 000 people attending this year’s WEF, with a third of those coming from outside Europe and North America. Business leaders, heads of states or governments, cabinet ministers, heads of international organisations, and ambassadors are just some of the participants. Members of civil society such as representatives of NGOs, media leaders, leaders from academic institutions and thinktanks, religious leaders, and union leaders make up the rest. There will be government delegations from over 70 countries attending, and all the G20 nations will be sending representatives.

Take a look at how many participants each country is sending to the Forum.

Some notable people who will attend the Forum this year include: AntÃ³nio Guterres, the new secretary-general of the UN, Chinaâ€™s president, Xi Jinping, who will be opening the meeting, and singer Shakira, who will be presented with an award for her work on childhood education.

This yearâ€™s meeting plans to address four major leadership challenges. These are: strengthening global collaboration, revitalising economic growth, reforming capitalism and preparing for the Fourth Industrial Revolution.Â In order to address these issues, Davos believes that there needs to be engagement between the many different stakeholders who will be present there.

The Forum does not really set out to achieve many of the things that make up its agenda; instead they seek to find ways to address challenges and facilitate discussions round that. It is mentioned on their website that Davos seeks to bring together people who would ordinarily not meet and who can make a difference to come together and find solutions.

Equality and societal disconnect under scrutiny

Several academics, members of civil society, and policy experts have written on issues such as â€œLooking at the Futureâ€, and â€œSupport for LGBT Equality and Globalisationâ€.

Chad Griffin, leader of the Human Rights Campaign, which is the largest LGBTQ civil rights organisation in the US, wants the world leaders at Davos to continue to pledge their unwavering support for LGBTQ equality. Griffin says the business community has had a great hand in changing attitudes as well as through the adoption of policies which are aimed at creating fairness in the workplace. Issues around equality will have to be high on the agenda, especially with reports that the estimated buying power of the LGBTQ community in the US alone is worth almost $197 billion.

The discussion around rights and equality for the community has been increasing, with more and more support garnered. But Griffin says there are many challenges ahead which will hopefully be discussed at the Forum.

One of the main topics of discussion at Davos is expected to be the disconnect between what the government think their citizens need and what they actually want, and how democracy is being threatened by the rise of populism.

Diane Coyle, a professor of Economics at the University of Manchester, writes that this issue is not something new and that the policies have been failing for many years. She says that if the problem is to be solved, there needs to be an improvement of infrastructure in smaller cities, better education of children that moves away from turning children into machines, and returning power to the people in terms of policy decisions.

Leonardo Quattrucci, Policy Adviser at European Political Strategy Centre, suggests ways to combat the bleakness of the future that faces a lot of the youth today in terms of people being unable to own homes, debt that threatens to cripple many, and climate change. Quattrucci – building on Schwabâ€™s vision for this yearâ€™s forum of responsive and responsible leadership – says that for effective governance there needs to be resilience, sustainability and solidarity.

If you are interested in the main issues South Africa will be looking at as our delegates head to Davos, Iqbal Surve of the Sekunjalo Group, who has attended Davos annually for the past couple of years, has listed eight key issues.

Despite the hopeful solutions and ideas that have been presented in the lead-up to the World Economic Forum 2017, it is difficult be optimistic. Not much has been achieved in previous meetings, or from the organisation as a whole. One of the many reasons people feel disconnected from their government and world leaders is because of organisations such as WEF, where the powerful and elite make policies and decisions that affect us, yet we have no control over. So while we might tune in to see what the members of WEF have to say, we will not be waiting with bated breath for any lasting change to come about.