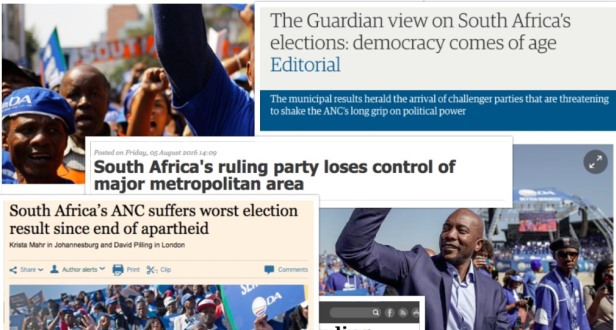 The ANC, still the most important, most relevant, most iconic of political parties in the South Africa, has been served humble pie at this election.

The ANCÂ are still in the lead (with some 54% of the vote) but they have lost Nelson Mandela Bay and are battling it out with the DA over Jozi and Pretoria. Â Which is a big deal. For a party that keeps on repeating that they will rule until Jesus comes, it is a pretty big deal.

For many it was to be expected given the arrogance of the ruling elite. To others, it has come as quite a surprise.

The inner workings of democracy on the African continent is still a novelty for many outside.Â And it seems everyone is interested in what went down here.

Well,Â here is a brief curation of what the world is saying about the results.

“The results may even mark the start of a new era, distinct from the ‘post-apartheid’ period that immediately followed the end of white-minority rule, as the African National Congress wakes up to the changed reality that it can no longer rely on the unquestioning support of poor black voters.”

“The African National Congress, the party that helped liberate black South Africans from white-minority rule but has become mired in corruption, endured its worst election since taking power after the end of apartheid, according to results released on Friday.”

The ANC has lost support among voters who feel their lives have not improved and the opposition has accused Zuma of mismanaging the economy. Millions of urban voters are now looking beyond its liberation struggle credentials and focusing on an economy teetering on the edge of a recession.

“The decline in support for the A.N.C. was especially sharp in the nationâ€™s eight major cities, where a growing number of black, middle-class voters turned against the politics of patronage personified by Mr. Zuma and increasingly resisted the A.N.C.â€™s emotive appeals to its heroic past.”

“It’s a pretty humbling day for the ANC,Â which is trying to put a positive spin on things.”

“South Africa’s voters have shown the ANC the yellow card. They are fed up with what the ANC, respected as a herald of democracy and human rights during Nelson Mandela’s era, has become.” “But there is a deeper trend that points to some of the paradoxes of South Africaâ€™s transition. The failure to spread access to the good life â€“ to schools and healthcare and work â€“ is obvious. People look around after more than 20 years of one-person, one-vote and see that opportunities have gone to some, while many others are still on the sidelines.”

“Its share [The ANC] of the vote in local elections sank to 55 per cent in a humiliation for PresidentJacob Zuma, who has survived a number of scandals and been blamed by many for overseeing a corrupt administration that has betrayed the partyâ€™s core principles.”

“South African elections are impressively clean affairs by any standards. Nasty weather was the biggest problem of the day, according to the Independent Electoral Commission … all of this is good news for South African democracy. Jacob Zuma, the unpopular president, has been dogged by corruption allegations and scandals for nearly his entire time in office. According to a recent Ipsos survey, 57% of South Africans believe the ANC has â€œlost its moral compassâ€.

“Discontent has expressed itself in near-constant protests leading up to the elections. In late June, protests in the capital of Pretoria turned to riots that ended in five deaths; two of those killed were looters who were shot dead. The unrest originated with low-level ANC members who were angry with their partyâ€™s choice for mayor, as the Monitor noted at the time â€“ a symptom of a party whose elite are seen as profoundly disconnected from its ordinary members.”

Well, what do you think?Â