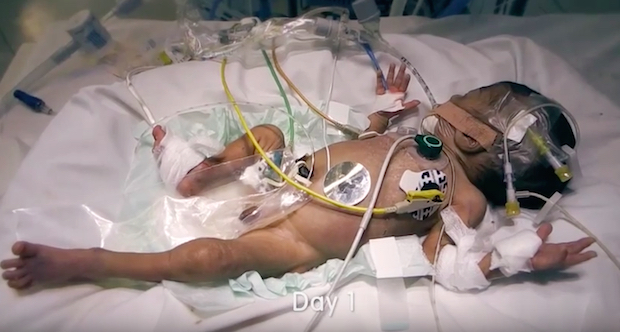 A heart-wrenching new video from the Newborns Trust, a special trust set up to support the neonatal unit at Groote Schuur Hospital in Cape Town, tells the story of Tarique, a baby born 11 weeks prematurely and weighing just 970g.

Babies like Tarique are unable to breathe or feed on their own. Without specialist care, they wouldn’t survive.

The video shows the struggles of his mother, who spends weeks going in and out of the neonatal ward, at first unable to touch her tiny baby as he lies in an incubator, with breathing and monitoring equipment strapped to him.

But, with the help of the dedicated neonatal staff, Tarique grows to become less fragile and less dependant on the machines and tubes. Eventually, he’s well enough to go home with his mum and is bundled up in a blanket like any other infant, placed in his mothers arms, and waved off by the nurses.

According to the World Health Organisation, around 15 million babies are born prematurely each year. “Of these, around one million babies die from complications due to prematurity. More than three quarters of these babies could be saved through better access to quality care and medicines for both mother and baby,” it says.

Dr Yaseen Joolay, a neonatologist at Groote Schuur Hospital, said that in low income countries, close to 90% of preterm babies will die.

“Due to their prematurity, the baby’s organ systems are often very immature, which makes it difficult for them to breathe, or to feed and digest milk, to fight infections or even just to keep warm. Because of their immature brains, the difficulties that occur during the neonatal period can lead to life-long disability. Neonatal units provide the supportive treatment to get them through the challenges,” he said.

“Parents struggle to cope during this difficult period and the stress often affects their ability to produce breastmilk,” he said.

To find out how you can help babies like Tarique, visit the Neonatal Trust website or donate to the organisation.

– Featured image: screengrab from the video