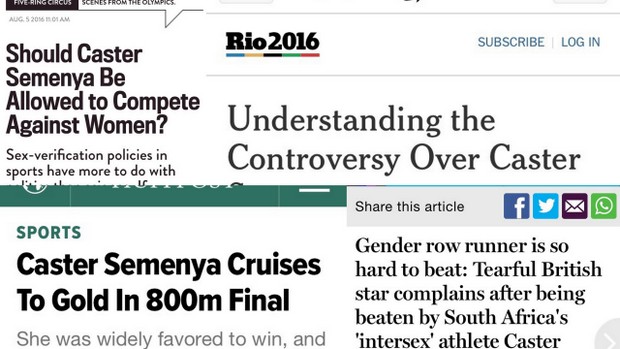 We didnâ€™t for a second doubt that Mokgadi Caster Semenya would bring home that gold in the 800m, despite the brutal scrutiny by fellow competitors, sports officials, journalists and viewers. And the world sat up and noticed. â€œCaster Semenya won her first Olympic Games gold medal with a dominant display in the final of the womenâ€™s 800m in Rio. The South African star set a new personal best of 1:55.33 over the two-lap distance and broke the national record in going one better than her silver medal performance at London 2012.

â€œHer winning time was two seconds adrift of the world record of 1:53:28, set by Jarmila Kratochvilova, running for Czechoslovakia, in July 1983.â€ â€œSemenya has dominated the 800m this season and there had been speculation she could take down Czech Jarmila Kratochivilovaâ€™s 1983 time of 1:53:28 seconds – the longest standing athletics world record, set in an era when eastern European doping was rife. After winning the silver medal in London four years ago, the 24-year-old South African has recorded three of the four fastest times in the world this year.â€

Should Caster Semenya be allowed to compete against women? https://t.co/1UXzYiWraY pic.twitter.com/QuKoW5AkaV

â€œAmong athletes with intersex conditions, none is as prominent nor as magnificently gifted as Semenya. Seven years ago, while still a teenager, she destroyed her rivals in the 800 meters at the track and field world championships.

â€œSemenyaâ€™s full ability has now been unleashed. Last month, she ran a personal best in the 800 meters. At the South African championships in April, she won races at three different distances on the same day. Tucker, who watched the events, says she wasnâ€™t even going all out.â€

â€œExperts do not suggest that Semenya has taken banned substances. No one serious is calling her a man. No prominent voices suggest that separate categories should not exist for womenâ€™s and menâ€™s sports.

â€œBut many remain concerned that womenâ€™s sports will be threatened if some athletes are allowed to compete with a testosterone advantage, even if athletes are reluctant to address the testosterone issue during the Olympics.â€

“On Saturday night, Caster Semenya won the 800m in 1min 55.28sec. It was a personal best, a new South African national record, and the fifth-fastest time in Olympic history. And it just may be that she never gets to run so fast again. Semenya, 25, is hyperandrogenic and the IAAF believe that she, and all other hyperandrogenic athletes, should not be allowed to compete unless they take action to suppress their naturally high testosterone levels.” â€œBritain’s Lynsey Sharp has reignited the row over controversial South African runner Caster Semenya by admitting it was ‘difficult’ to race against her.

â€œSharp had previously complained Semenyaâ€™s condition had resulted in â€˜two separate racesâ€™ ran a personal best time in the weekend final â€“ but still finished nearly two and a half seconds behind Semenya.

â€œThis fact proved rich pickings for Sharpâ€™s online critics, who demanded to know why the Scottish runner was ‘picking on Casterâ€™ and not the four other runners who also comfortably beat her.â€ â€œSemenya, 25, set a national record to win in one minute 55.28 seconds and finish well clear of silver medallist Francine Niyonsaba of Burundi.â€

â€œSemenya has faced continued questions over her eligibility to race since her impressive 2009 World Championship win as an 18-year-old, with concerns raised that she should not be able to run as a woman.

She has since been diagnosed with hyperandrogenism, which means her testosterone levels are far in excess of the vast majority of women.â€

â€œCaster Semenya won the Olympic title in the 800m Saturday with no-one close to challenging her, a result that will only stoke the complex debate over whether women with much higher levels of testosterone than normal should be allowed to compete unchecked.

Semenya, of South Africa, won her first Olympic gold in a personal-best of 1 minute, 55.28 seconds, a national record and one of the top 20 times ever in the two-lap race.â€