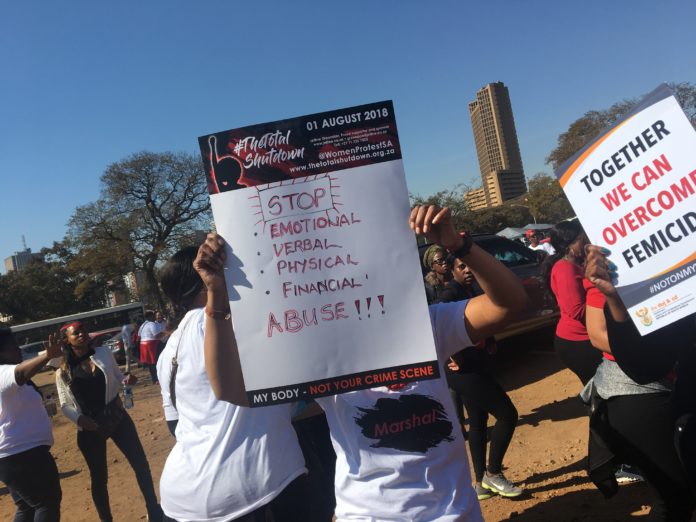 “Violence against women has become more than a national crisis. It is a crime against our common humanity,” said President Cyril Ramaphosa during a pre-recorded address to South Africa on Thursday. Earlier that day, thousands of protestors marched to Parliament and handed over their memorandum of demands to the president around the scourge of gender-based violence (GBV) and femicide the country is facing. The President promised to take action, including implementing emergency responses.

Ever since the news emerged of the murders of Uyinene Mrwetyana, Leighandre Jegels, Janika Mallo, Ayakha Jiyane and her siblings, there have been calls for stronger actions against GBV. On Wednesday thousands protested outside the Cape Town International Convention Centre. The World Economic Forum was taking place there. Marches and protests have been planned around the country. The message being women in South Africa are tired of facing violence on a  daily basis.

Now according to the constitution of South Africa, a state of emergency may be declared under certain conditions only. These include the life of the nation is threatened by war, invasion, general insurrection, disorder, natural disaster or another public emergency; and the declaration is necessary to restore peace and order. It cannot be longer than 21 days. It may only be extended for three months at a time. This gives the government the authority to carry out actions that would otherwise not be legal. It includes suspending certain freedoms like the freedom of movement and speech.

Professor Amanda Gouws from Stellenbosch University told The Daily Vox in a state of emergency there is usually heightened police presence. There would also be a curfew for people in the country.

According to Gouws, the president and his cabinet would assess the situation and then call for the state of emergency. “He cannot call for it unless it will be approved by parliament,” said Gouws.

Former deputy President and the current Executive Director of UN Women, Phumzile Mlambo-Ngcuka has also called for it. Speaking on SABC, she said: “We are in crisis in South Africa. A state of emergency would enable the President to take extraordinary measures to scale the interventions that are so much needed to fast track the implementation of some of the policies and interventions that have already been agreed upon, we need extraordinary measures.”

While many have called for the state of emergency, some have raised concerns about it. This is because the state of emergency would mean a suspension of the norm. It could include public gatherings like protests and marches being shut down. Law enforcement agencies would be given a lot of power to arrest and detain people.

Gouws says the process could improve safety but there are negatives. She says it would curb people’s freedom of movement and association.

The South African has had an ample amount of time to deal with the issue of gender-based violence and femicide. There are many policies, plans, and legislation to solve the issue. Yet there is a continuing lack of implementation. The government seems unconcerned to actually take decisive steps. It seems unlikely they would be able to solve the problems in 21 days or even 3 months.

Additionally, there is the issue of law enforcement. This would be increased during the state of emergency. However, Gouws points out that the police are part of the problem.

“When women come to report rape, they are sometimes ridiculed and the police do not have the appropriate training. What the government needs to do is to implement its own legislation,” she said adding: “But I’m not sure the government gets it.”

Women in South Africa are forced to live under a threat of violence on a daily basis. The statistics around GBV and femicide are terrifying. Something’s got to give. However, curtailing human rights and suspending constitutional rights through a state of emergency is no way to go.