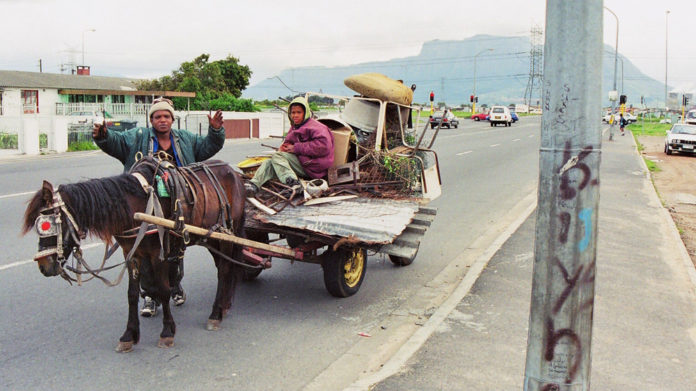 The history of blackness in the South African context is most aptly described as tumultuous and divided. Apartheid fashioned a plethora of constructs among black ethnicities which caused a convoluted idea of identity and resultant identity politics. The notion that skin tone and hair types are currency and racial line drawers, the notion that the whiter the righter, the notion that proximity to whiteness is a yardstick by which to measure social status, writes JADE SEPTEMBER.

The result of all these proverbial lines in the sand, meant that blackness was essentially broken. Disintegrated. Segregated into what is today regarded as “Black”, “Indian”, “Coloured”, “Malay”, “Khoi/indigenous” and the like, all of which form part of the unified body of blackness. With the separatism, came tribalism, colourism, a decline in black consciousness, a less organised people. This was solidified by the Group Areas Act which saw black people separated and moved away from each other into abject poverty and Apartheid spatial planning which was designed to contain the “black threat”. Unfortunately, although Apartheid has long since ended, the constructs, which at the time where physical, manifested mentally and are still prevalent today.

I recently attended a dinner soiree where up until one particular moment, I had foolishly assumed that all of us there present were black. That we identified as such, and saw each other as such. That was until a very close friend of mine pointed out that I am, in actual fact, not black, on account of my being obviously coloured. While I found his comment to be inflammatory, it did give me pause. This is how we were raised. This mentality is the result of years of separatism and, while I don’t hold it against him, it did stick in my craw. At the same time, I realised that, because of this separatism, his lived experience would have been radically different to mine, and that I had no right to authoritatively speak on his lived experiences. His experiences have never been my reality.

These same Apartheid constructs are the ones which endow lighter skinned individuals with privilege not afforded to their darker skinned counterparts, cause anti-blackness to consume entire communities, and cause different lived experiences to be rampant in different areas.

If there is one thing South Africans are known for, it is our story-telling ability. Given the different experiences lived in differed parts of Apartheid spatial planning, who then becomes the custodian of these different stories? One thing is for certain, these stories must be told.

However, if you have not lived a reality, do you have the right to speak on it in an authoritative voice? Absolutely not. It is disrespectful, it is biased by default and you will go on to actively perpetuate stereotypes which, chances are, are enough of a battle to contend with as is.

I read a think piece by Haji Mohammed Dawjee published by Tortoise Media and it made me cringe. First of all, with all the healing needed to be done by black bodies, are we still making distinctions between brown and black people? Being brown is not different to being black and making such a distinction draws an immediate comparison and is, quite frankly, violent.

The Cape Flats is a living nightmare with a body count on the rise day by day. The last thing needed right now, is for someone to swoop in with a misguided saviour complex and gaslight black bodies into telling their stories, only for those stories to be retold in a manner that makes it extremely apparent that A) The writer is very far removed from the subject matter both mentally and physically, and B) She had no right to tell that story.

The reality is that, in South Africa, as much as black bodies are trying to move back to unity, black consciousness and overall equality, boundaries still exist. Boundaries which talk to the identities caused by separatism and the different stories held by these identities.

The Cape Flats reality is a painful one. It is the reality of living in constant fear. It is the reality of violence caused by a much larger set of systemic principles designed to have black people kill each other. To be the root of our own turmoil. Hijacking those experiences and telling it through a different lens essentially strips away the agency of the ones who live it. It diminishes their lived experiences to the point where they become caricatures in someone else’s story. Plot points, sage one-liners, juicy material and nothing more.

The most disturbing part is that colonisers did the same thing for centuries. History is and always will be written by the victors. The stories of the most ancient peoples were written by colonisers who interpreted their lived experiences for themselves and chose to weigh in something they could not possibly know the truth about. The evil at the root of all this is narcissism.

Talking about how you have to leave the sunshine and privilege of Seapoint to slum it in the Cape Flats is not something you were asked to do. Stay in “the shadow of Table Mountain” then and, by all means, tell your own story. Don’t gaslight people into sharing their lives with you in the hopes of raising awareness only for you to bastardise it and paint yourself as a saviour. As should have been expected, your story was taken as inflammatory and its garnered backlash that you, unfathomably, did not expect. You reacted by being a textbook narcissist and allowing a young woman who lives this painful reality every single day to be bullied by a man who felt that he needed to come to your needless defence. You allowed Charne to be bullied on your watch. You watched as this man relentlessly tried to take her agency from her and you encouraged it with retweet upon retweet.

The bottom line is that you penning your piece came from a place of selfishness. You get paid to pen these pieces, do you not? It came from a place of narcissism and intentional gaslighting. You paraded a people’s pain and made a puppet of the woman you interviewed. Instead of saving yourself the effort of nit-picking on Twitter and issuing weak apologies for the ONLY passage YOU deemed to be triggering, why did you not just use your not-inconsiderable resources to empower people from the Cape Flats to tell their own story? The fact that you didn’t rather denotes a lack of comprehension, and to be honest, caring in general.

Black bodies are not tools for you to generate likes, attention and revenue. We can tell our own stories. There are many voices who have the right to speak authoritatively, and to, as rightful custodians, share our stories. Don’t diminish our lived experiences because you have absolutely no right. Don’t separate blackness because, again, you have absolutely no right and furthermore, all you are doing is compounding a much bigger problem.

Sometimes, Haji, the right thing to do is just hou jou bek.

Jade September is an independent writer born in Mitchells Plain. After completing her schooling in Lansdowne and Goodwood respectively, she went on to study at the University of The Western Cape before pursuing a career in writing.