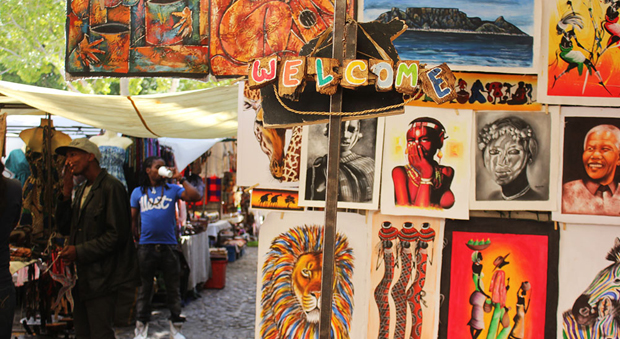 Despite the recent xenophobic attacks in Durban and Joâ€™burg, in Cape Town, the streets have been quiet. Immigrants working in St Georgeâ€™s Mall and Greenmarket Square in the CBD told RAâ€™EESA PATHER how theyâ€™re doing their best to prepare if the worst comes to pass. Kalombo Fidel, 48, informal trader, Grassy Park, originally from the DRC
On the 8 April 2015, we received a message to say they are going to attack us in Cape Town. Each one of us got the message in our own language to alert us, but we didnâ€™t know where it would start. Xenophobia is not a sudden movement, itâ€™s a well-organised movement, and the leader must be arrested. As foreigners, weâ€™re scared, weâ€™re unsafe. This country has to respect human beings: Iâ€™m a human being â€“ I have the right to live. Where I come from, there is war, so thatâ€™s why I pushed to be here, but once those people organise like this, we have fear. We have to protect ourselves. I donâ€™t use guns, because I canâ€™t judge most of these people â€“ they are what they are. I use my own mind to protect myself. I strategise so that I know where I can go, and I know where I canâ€™t go. Weâ€™re in a democratic country, but the freedom is not that you go to vote. Freedom means respecting a life. Democracy is about law, and the law must be respected; if it is not, then there is no democracy. All the campaigns theyâ€™re using now to fight xenophobia, I saw it done during Mbeki times (in 2008). It does nothing. Being a leader, you have to precede the event â€“ itâ€™s not the event that must precede you. If your child gets sick you give your child medicine to prevent it from getting worse. Zuma must do the same here. Bondo Nebeno, 42, informal trader, Mitchellâ€™s Plain, originally from the DRC
Iâ€™ve been in South Africa for nine years now. Xenophobia is about the jealousy from our brothers in South Africa. They say we take their jobs and opportunities. But we just create small businesses the way you see it. To sustain the business takes sacrifice. They donâ€™t understand that. The attacks wonâ€™t come to Cape Town. It started there in KwaZulu-Natal, and the way I understand South Africa is that the country is divided. This attack came from the Zulus, and the Xhosa people wonâ€™t follow. The majority here in Cape Town is the Xhosa people. I was preparing myself for a long time. I have family; I canâ€™t allow everybody to come to kill my family. Before they touch my family, I will die. I bought my panga, and I was waiting in my house to see if they would come. The Zulu king is not the politician, but beyond him is the politician. The politician is Zulu and the king is Zulu â€“ you see? The king wants to be known because the people donâ€™t know him, and now the people have lost lives because of that declaration. But the politician does nothing. Susan Depanda, 36, unemployed, Belhar, originally from the DRC
Iâ€™m feeling bad, my sister. That problem hurts my country and my life. Here in Cape Town, I didnâ€™t see nothing, but I have family there in Durban and a friend in Joburg. My friend phoned me, he said they were cutting this one lady, and sheâ€™s dead now. Only God knows â€“ for us, we donâ€™t know if it will happen here. I donâ€™t like South Africa, but Iâ€™m staying here because my kids have to go to school. I want to leave, it will be better because thereâ€™s no peace here. If thereâ€™s no peace you canâ€™t stay. If you go now to Congo, thereâ€™s a lot of foreigners: Nigerians, Somalis, but nobody does anything to them. The president here never liked us, he never liked the foreigners. Gladwell Saka, 25, informal trader, Gardens, originally from Malawi
I donâ€™t like these kinds of things, because weâ€™re all part of one Africa. Thereâ€™s no need to fight each other or kill each other like whatâ€™s been happening in the country. They say now itâ€™s stopped, but in other peopleâ€™s minds it hasnâ€™t stopped. Most of my friends they went back to Malawi, because they were scared of these attacks, now Iâ€™m left with four friends here in South Africa. I was not afraid because I feel secure here in Cape Town. Iâ€™m more afraid for other friends of mine because they stay in the locations. One day Iâ€™m going to go back to Malawi, but not now. I left my family there, so Iâ€™m still missing them every day. There in Malawi we have business, but itâ€™s tough. Here in South Africa, tourists come and visit from other countries so we can show them our art, and it helps us. Agnes Tambwe, 48, informal trader, Lansdowne, originally from the DRC
Itâ€™s not good for us foreigners because we ran away from war in Congo, then we came here, and now again we are being attacked. I donâ€™t stay in the locations, so I havenâ€™t been attacked. We are scared, but we donâ€™t display all our stock, we just put out a few. If they come, we will run and leave those few stuff. My husband passed away; Iâ€™m a widow now with children. Itâ€™s difficult â€“ I canâ€™t protect them. We were just staying in the house, because we were scared. I told my children to stay home from school, so they stayed out of school for three days. What the president is saying is not right: he is the president, so he is supposed to give people papers to stay, but Home Affairs never gives foreigners papers. Zuma must tell people we are one because we are African. Even in our country, we keep South Africans; they stay there, but no-one hurts them.