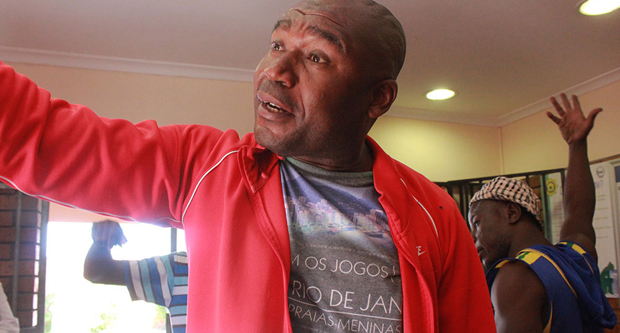 We call the victims of xenophobic attacks foreign nationals, but I wonâ€™t doÂ that here. The term â€œforeignâ€ nationals creates aÂ bigoted binary of us and them, and I think weâ€™ve hadÂ enough bigotry in this country. Instead, IÂ ask, when was the last time we consideredÂ that these xenophobic attacks are worsening the lives of refugees? By RAâ€™EESA PATHER.

Not too long ago, the Daily Vox published an article on Femi Kuti, the son ofÂ music legend Fela Kuti. The Nigerian said he once saw South Africa as the nationÂ that would liberate Africa. He was sorely disappointed, and itâ€™sÂ easy to see why.

Last weekÂ at the Philippi township police station just outsideÂ Cape Town, I spoke to a Nigerian man who had been drivenÂ from his shop by looters.Â Coincidentally, his name was Femi too. His hand was swollen, and he wasÂ barefoot â€“ he had lost his shoes running for his life after a mob of communityÂ members had broken into his shop and stolenÂ everything.

â€œThey had knives and hammers, and they were just saying â€˜Somalia, Somalia,Â Somalia must goâ€™,â€ Femi Olumide told me. â€œThey broke the roof and they tookÂ everything out. Thereâ€™s nothing left.â€ Femi wasÂ wide-eyed and animated as he spoke, as if the adrenaline from the previousÂ nightâ€™s violence was still coursing through his veins. South Africa may haveÂ overcome oppression 20 years ago, but weâ€™ve surely made a mess of helping ourÂ neighbours in their pursuit of liberty.

â€œWe need to understand that refugees and asylum seekers are here in thisÂ country legally and they are running away from terrible situations in theirÂ countries,â€ Vuyani Shuane from the Cape Town Refugee Centre told me. â€œBigÂ cities attract foreign nationals who are seeking greener pastures. Remember,Â they must find ways to survive.â€

Out on the streets in the Marikana Land Occupation informal settlement, aroundÂ the corner from the police station, rubber bullet casings littered the road, and inÂ front of a battered Somali shop, a VCR tape lay wedged in the tar. The title on theÂ label read â€œIn Hellâ€, it hadÂ an 16V age restriction.

Many of the young men inside the store were younger than 16, but they were perhaps all too familiar with violence. At first glance, there was nothing left inÂ the shop â€“ the fridge was empty, and even the shelves had been taken away. ButÂ the youngsters had hammers andÂ they were dismantling the shop entirely for scrap metal. As they plundered, I wondered where the Somalis who owned the shop were.Â Itâ€™s an odd thing to stand by and watch a crime happen. The police wereÂ patrolling all over Philippi but no-one seemed to care.

Ashraf Hendricks, aÂ friend of mine and a photographer, had accompanied me to the area and we stumbled upon a looting thatÂ had just begun. Police were outside and the Somali owners were nowhere to beÂ found. The neighbours next door to the shop told me they hadnâ€™t seen theÂ owners around, which meant we probably knew the shop was being lootedÂ before the owners. They would simply come back and find nothing.

It is a very different thing to speak of a mob attacking and robbing a refugee, than to say the same ofÂ a foreign national.Â Perhaps, we would have more shame concerning this issue and more empathy for the victims of these attacks if we recognised where they have come from and why they are here.

Hamza Mohamed, a Somali journalist,Â once told me: “For South Africa, reconciliation is between black and white. For Somalis,Â imagine having a civil war within one family. In one family, a father might be fromÂ one clan and the mother from another clan. A clan civil war becomes your wholeÂ family against you or you against your brother. Reconciliation is not an easyÂ thing to do.â€

Somalia, forÂ example, only recently established a centralised government in 2002. For the 24Â years preceding that, the country was in anarchy, torn apart by clan factionsÂ after former Somali president Siad Barre was overthrown in 1991. AroundÂ 500,000 Somalis died in the civil war and 2-million were forced to flee.

Iâ€™ve spoken to Somalis around Cape Town, and even though I cannot know whatÂ they have experienced, I have some understanding of their hardships. TheyÂ talked to me about their parents forcing them to leave at young ages so that theyÂ could liveÂ â€“ there was a time when surviving in Mogadishu, Somaliaâ€™s capital, wasÂ a gamble. They spoke to me of not knowing the language in South Africa, of theÂ fear they have of locals, and of how they have nowhere to turn.

If only we could to talk to one another instead of throwing stones, perhaps weÂ wouldnâ€™t be so quick to chase away our refugees.