Home As Told to “As Africans, when we tell about our tragedy and stories – believe...
WhatsApp
Facebook
Twitter
Email
Print 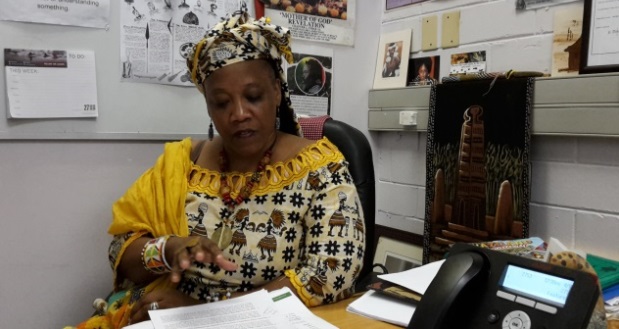 It has been almost a year since xenophobic violence swept through Kwazulu Natal, killing seven and displacing thousands. China Ngubane spoke to QUEEN YAA ASHANTEWAA, who is involved in training and development in the province, about issues of social cohesion and Afrophobia.

For those of us who run business in terms of training and activations, we were affected because a lot of our work was diverted. [This] meant that we couldn’t do business as usual since we had to deal with the issues at hand.

It might not seem like were not affected outright because some of us were not beaten, or we weren’t thrown out of buildings. But those of us who are involved in training and development, most of our work was diverted because we needed to be on the ground, so our budgeting and planning were affected. For about three or four months we were responding to this unexpected tragedy.

Emotionally, we did not recover, but what it did was to force us to look at the narrative of social cohesion – who is involved and how people understand living amongst each other from different parts of Africa. We now have to change the whole plan of action in terms of the whole anti-xenophobia strategy, the social cohesion narrative and programmes.

It will be to our detriment that we forget, and I think we are so quick to close the scar, that we don’t go to healing. Part of my agitation is that there is need to be some activities of healing which we haven’t done, because we are so used to just saying “it’s the past”, we forget and we move on.

It must be the children that we teach; we must at least guide them on how we behave when we see the other or when the other is around. It is that language that it’s “us” and “them”. In xenophobia, we also have to talk about the Afrophobia element. It was African nationals or people of African descent that were affected – not foreign nationals. We need to talk about Afrophobia and not to wish away from it. The biggest part about inclusion is about language and how we speak about, and to other people. Cohesion is not just about getting together and having a party.

I think xenophobia emanates from governments. The government must be able to, within its language of telling the story, also talk about the [role of] front line states in sustaining and enabling the struggle stalwarts to be able to defend South Africa. This is very real. Until we start putting those in the history books in a more defined way, then we are always going to pretend that they never existed.

Secondly, I don’t really think grassroots people hate Africans. South Africans have not had a time to really savour the victory of defeating apartheid. This is because we have been forced into this reconciliation and we took it that everything is okay and we moved on. That savouring is in the resources and the power of government and it is about rewriting our books. We still haven’t been given a chance in many instances.

When the fish comes from the water and it tells you that the sea is deep, you must believe him because the fish belongs to the sea. As Africans, when we tell about our tragedy and stories – believe us. When we say we know the hatred of another African, believe us. The problem is that we want to theorise the African history. Our experiences are lived and they are not in story books.