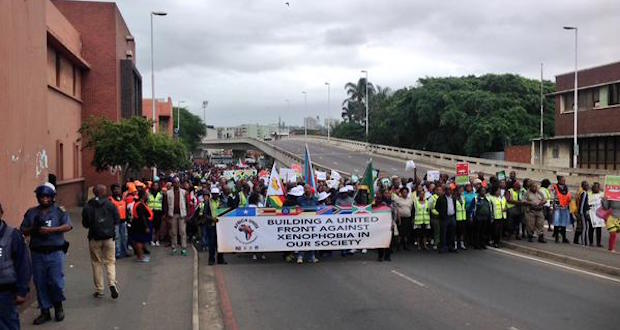 In March 2015, the otherwise sunny city of Durban was hit by series of violent attacks on foreign nationals. The violence moved on to other parts of the country and by May, seven people had died and some 5,000 others had been displaced. Following the attacks and public pressure for action and accountability, the KZN provincial government were forced to do some soul searching. Why did this happen? How can we stop it? Will it happen again? After a long wait (seven months!) the report was released on Tuesday morning. DANA DA SILVA rounds up what the report actually says.

Why did the violence take place?
The immediate cause of the attacks was a result of an attempt to drive away competition by foreign national-owned businesses.

Tensions are very high in the informal economy where perceptions of foreigners (mostly unfounded and unjustified) are shaping tensions. Locals believe foreigners who are succeeding are doing so at their expense.

How many people were affected?
Over a few weeks, at least 5,600 people were forced to flee their homes. Seven people were killed.Â Moreover, the inadequacy of the criminal justice system has impacted on everyone’s notion of justice. Foreigners feel that authorities, including the police, don’t take their problems seriously and South Africans seem to think that they won’t be held accountable if they commit a crime against foreigners. In many cases this is true, but it’s an indictment on the country’s criminal justice system that also impacts South Africans.

There is a lot of misunderstanding. A lot. It leaves foreigners feeling anxious and locals feeling short-changed.

What about inflammatory public statements by leaders?
This is an interesting one. Authors were unable to find a connection between the king’s speech and the violence that subsequently broke out in Durban and elsewhere. And the role of the media?
According to the report, the prevailing atmosphere of violence was amplified by rumours and lies circulating across social media. A lot of what was shared was fake or misinformed and contributed to the panic. Thousands fled because of “fear” and not because of a tangible threat.

The media failed to “contextualise the violent occurrences” and its “misuse inadvertently contributed to spreading exaggerated claims, unfounded fear and panic about the attacks about foreign nationals. (Yes, blame the messenger).

How did government respond to the crisis?

Municipal, provincial and national bodies tried to restore stability. This included policing and building make-shift shelters. There were moves to attend to some of the underlying issues.

But tremendous issues remain when it comes to implementing immigration-based policies and creating the conditions for reintegration.

Authorities, including police and government officials, are still not very clued up on the rights, histories and cultural needs of foreign nationals. This has to change. Fast.

Government-led integration dialogues, as ambitious as they have been, have rarely involved both local communities and displaced foreign nationals.This is its own kind of bizarre.

Closing down the Chatsworth camp on June 30, 2015 was very contentious. Most of the foreign nationals still at the camp when the camp closed (around 191 people at the time) were from Burundi and DR Congo. They were asylum seekers with nowhere to go. They were unable to return “home” – to home country or local community.

Lessons learned?
The number one threat remains high rates of poverty and unemployment. This includes unequal access to quality education, housing, health services, and employment opportunities in townships. This fuels perceptions of “us versus them” and widens the gap between the haves and the have-nots.

It is important that South Africans take responsibility for development, growth and stuff (duh). The report suggests that there need to be “innovative solutions to reduce tensions in the small and informal trading sectors”.

The constitution guarantees rights and protects dignity of all persons living in the country. People need to remember that. Civil servants need to be educated on the rights and documentation of foreign nationals. (It sure is about time)

Migration is not about to end. There are enough push and pull factors likely to bring more foreign nationals to South Africa. It would be best for authorities to get their immigration infrastructure in order.

There are a lot of scars. And trauma. And unfinished dramas. It can happen again.