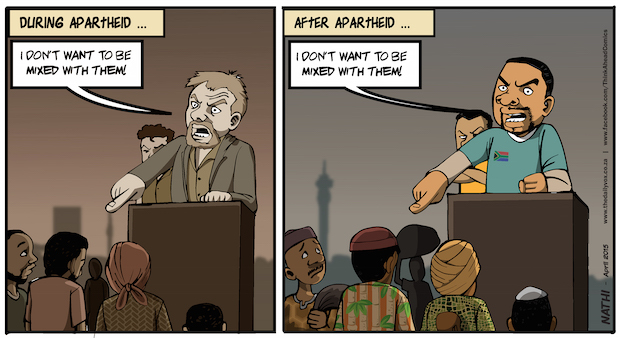 Xenophobic attacks in Durban have escalated over the past week. Foreign owned shops in KwaMashu were torched and looted by a mob of â€œthousandsâ€Â on Sunday, overwhelming police. On Monday, a mob entered the Durban CBD andÂ threatened foreign nationals,Â who ran for cover. Shots were fired and Durbanâ€™s metro police were called to intervene.

ANC secretary-general Gwede Mantashe, meanwhile, has been loathe to describe the violence as xenophobia, choosing instead to describe the it as â€œafrophobiaâ€. Police minister Nathi Nhleko, who according to News24 referred to the violence as a form of African â€œself-hateâ€, hasÂ said the situation was not yet desperate enough to warrant army intervention.

As Pierre de Vos wrote in January, xenophobia in South Africa has much in common with apartheid-era thinking. â€œThis feeling of apartness from the rest of our continent and from its people (exhibited by some, but obviously not all, South Africans) must surely be partly blamed on the political isolation of South Africa during the apartheid years… Some South Africans have probably also internalised some of the racist thinking on which the apartheid regime was built.â€

But, our Constitution specifically protects foreign nationals.Â Why then is thereÂ no space for our African brothers and sisters in the so-called rainbow nation?