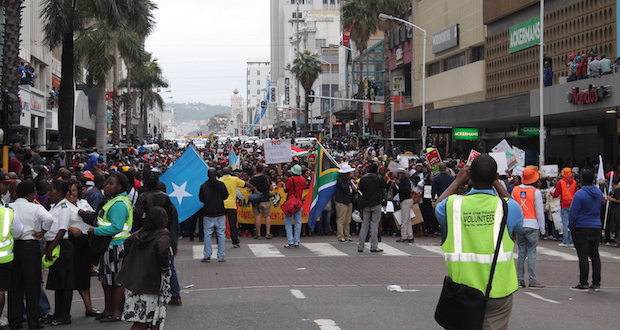 A peace march called on Thursday to protest against the xenophobic violence in Durban was supported by thousands of people, who marched from Curries Fountain to the Durban City Hall. QINISO MBILI asked people attending the march why they were there. Colleen Lotz, 40, lecturer
We are all human; we should treat each other good. It does not matter where someone comes from. The presence of legal African foreigners has no negative impact in the South African society. Although there are many of them, their coming and going is still controlled. There are many South Africans who migrated to other African countries. If we treat our foreigners like this, then what are we saying about South Africans who are foreigners in other countries? We will never like it when things of this sort happen to them. Jill Cowley, 45, mosaic artist
There is definitely no need for all of this violence. It can never achieve anything â€“ even if you had the right to chase people out of the country, this would not be the way to do it. We should all make a plan to get along well. The government is not taking this seriously enough. The cause of the violence should not be overlooked. Some of the people complain that the city is congested and that foreigners take their jobs. If the government properly provided for the people, we wouldnâ€™t be experiencing this. Thulani Bhengu, 51, security officer
People donâ€™t understand. Not all foreigners are here illegally and not all of them sell drugs. Some are here not by choice, but because their countries are poverty-riddled and [they] are here looking for better lives. You canâ€™t order someone to just pack up and leave â€“ they have lives here. You wouldnâ€™t like it yourself if you were to be chased away and forced to start a new life. The government is not doing enough to stop people from doing this. One of the peopleâ€™s main complaints against foreigners is that they sell drugs; the government needs to make laws against drug dealers tougher, whether it is foreign drug dealers or locals. Themba Khumalo, 48, unemployed
South Africans are so angry and they have a history of violence. I am embarrassed to be South African right now. What is so wrong with our African brothers and sisters coming into the country and looking for a better life? It is stupid to assault and kill someone just because they have a different accent from yours. My spouse works for a foreign friend of mine and he is a good man â€“ he always does us favours. Fortunately, the violence hasnâ€™t yet reached Wentworth, where he lives, but I fear that he might not wait for it to reach there and my spouse will be out of a job. This march is a good initiative; I hope it is the beginning of more action by the government. Elizabeth Kunene, 21, student
I really wish people could stop this. This is inhumane and hypocritical of us. Two decades ago we were fighting against apartheid and now we are enforcing something exactly like it on our brothers and sisters. Even apartheid was less disgusting because it was one race harassing the other, now it is black people fighting other black people. Iâ€™m deeply disgusted and embarrassed because this shows a sense of ignorance and narrow patriotism among South Africans. White supremacists are laughing at us and rejoicing now, as this proves most of their opinions about black people. This needs to stop â€“ it is bringing down the reputation of our country.

Voxes have been edited for brevity and clarity.
All images: By Qiniso Mbili.