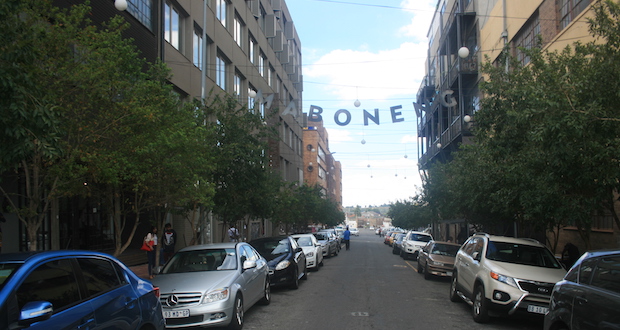 Last Thursday VUYO XEGWANA, 24, a postgrad law student at Wits University, witnessed a xenophobic attack outside her apartment in Maboneng. Muhammed Ismail Bulbulia spoke to her about theÂ experience.

I had heard that the xenophobic attacks were happening, and I had seen on the news some footage of the attacks, but I didnâ€™t really believe or know the magnitude of it until it was on my doorstep.

I live on Fox Street, on the border of Maboneng and Jeppestown. If you are on this side of the street, you are in Maboneng, the developed side; if you cross the street, youâ€™re in Jeppe and faced with hunger, deprivation, starvation and the like. Most of the shops on Main Street are foreign-owned shops.

Last week Thursday, I was sitting with my boyfriend, and studying at our apartment. Thereâ€™s a shebeen close by, which plays loud music until 3am every night. But that night, the music was off by about 10pm. I thought it was weird, but I wasnâ€™t complaining. Retrospectively, it seems like these were the planning stages of what was going to happen.

All of a sudden, we heard screaming and loud noises in the street outside. People were shouting across the streets to each other. We jumped up and ran to the window, and there was a mob of local South African people speaking isiZulu, kicking a guy, beating him up on Main Street just outside. I started screaming as well because I was terrified, not only for myself, but for him. Two seconds later, police arrived on the scene and there was absolute chaos â€“ people running everywhere, rubber bullets flying, sirens blaring. The police took the guy who was being attacked and put him into the van. About four guys that were shot with rubber bullets were trying to escape. The rest of the night was just a repetition of that â€“ I donâ€™t know if more people were attacked, but we could hear the same pattern of screams and bullets and sirens throughout the night.

The one thing that stuck out was that even though the police were shooting at these guys, the perpetrators and instigators, they screamed back in isiZulu saying, â€œWhatever you do, weâ€™re going to finish them!â€

That same night, four guys from the mob broke into my building and charged directly to the managerâ€™s office â€“ the manager of my building is a Zimbabwean. They stood outside his door, demanding that he come outside so that they can â€œfinish him offâ€.

Because the police station is so close, the police came almost immediately after security called them and took the guys away. I spoke to him after that â€“ he was absolutely terrified. He wants to leave, but at the same time, the thought â€œWhat am I going back to?â€ is at the back of his mind because he came here to get a better life.

The following day, when I got up, I immediately felt like going out and taking a stance; I had this sense of â€œWe have to do something!â€ Even though I might be black, andÂ perpetrators of these attacks are black too, we donâ€™t have the same reality. I am able to identify with their frustrations and struggles because I too lived a life of frustration and hardship, so itâ€™s understandable â€“ but not justifiable.

What I can say about this entire experience is that it invoked the human in me. I donâ€™t comprehend how people still came to Arts on Main the next day, lived the life, sipped on their drinks, ate their pizzas and took their Instagram photos.

I donâ€™t understand how, as a human being, you could do that knowing that this is happening in our country. I donâ€™t understand how people got on with their lives when our people, our brothers and sisters, were getting slaughtered for no particular reason. There needs to be an understanding among people â€“ make them uncomfortable, if needs be â€“ so that they can realise the gravity and magnitude of this plague.