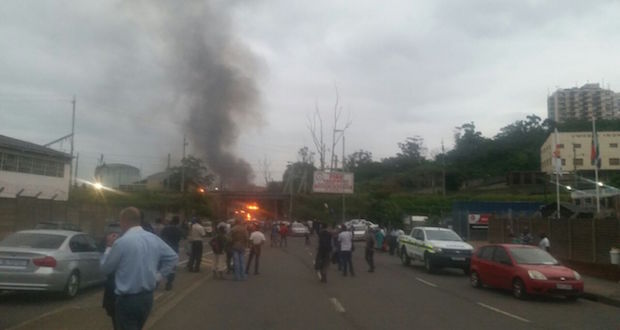 Xenophobic violence reared its head in Durban this week, with foreign nationals given an ultimatum to leave the country left fearing for their lives and seeking refuge with police. According to IOL, about 120 people were attacked in Isipingo on Monday night.

â€œThis is black Easter in KZN for foreigners,â€ said China Ngubane, a human-rights activist based in Durban, who was on the scene.

â€œIn Malugazi, 3km from Isipingo, shops are being looted now. One Ethiopian [was] allegedly killed.â€

â€œIn Kenville, near Moses Mabhida stadium, roads are blocked; foreign-owned shops looted. One Indian couple [was] chased from a house. [There were] reports that the couple may have been killed,â€ Ngubane said in an email.

Another eyewitness, who asked not to be named, told the Daily Vox that the protests did not appear to be organic.

â€œIt didnâ€™t look like your normal people joining a mob; this looked orchestrated,â€ he said.

Foreign-owned shops in Isipingo have since been boarded up and street hawkers have fled.

â€œThere are a lot of guys who are hawkers [in Isipingo]; theyâ€™ve got little tents, cutting hair, selling things on the roadside â€“ theyâ€™re all gone,â€ he added. After the attacks, foreign nationals fled for safety to the Isipingo police station.

Itâ€™s believed that the riots were sparked by comments made by Zulu king Goodwill Zwelithini last week. Zwelithini was reported to have said that foreigners should be deported as they were competing with locals for employment opportunities.

The SA Human Rights Commission has launched a probe into the remarks, but Zwelithini has now denied making them.

KZN community safety and liaison department spokesperson Sipho Khumalo told East Coast Radio that police had a security plan in the works and that the department was trying to organise a forum to allow those affected to discuss their concerns peacefully.

â€œThe MEC and the province of KZN have urged that all parties that are complaining about the presence of the foreign business people that let this matter be discussed in a forum with authorities with the view of resolving it amicably,â€ he said.

– All images courtesy of China Ngubane.