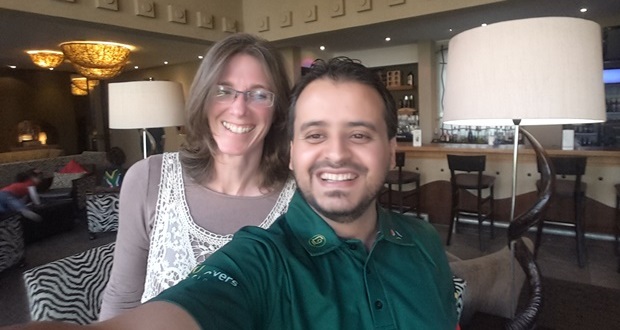 Sound Africa, a new website broadcasting African radio documentaries that don’t get much attention from mainstream media, has released a podcast looking at the process used to free Yolande Korkie from Al-Qaeda. DANA DA SILVA rounds up the story.

“The Wait is Almost Over” is a two-part series about the hostage negotiation process used to free South Africans Pierre and Yolande Korkie from Al-Qaeda in Yemen. Producer Micah Reddy narrates the long and difficult attempt to rescue the South African couple, with commentary from Yolande and Gift of the Givers’ Imtiaz Sooliman and Anas-al-Hamati. Pierre was killed in the crossfire that occurred in aÂ US raid whichÂ attempted to free him and an American journalist, Luke Somers.

It starts off by looking at their life in Yemen before the kidnapping. The couple moved to Yemen in 2009 and at the time, the country was fairly stable. Yolande describes life before the revolution as being relaxed. This soon changed with the Arab Spring, which narrator Reddy describes as having plunged the country into chaos.

For Yemen, it all began in 2011, where thousands of Yemenis demanded the resignation of their long-time ruler, Ali Abdullah Saleh. During this time, the local and active branch of Al-Qaeda captured large stretches of territory and started getting involved in kidnappings.

The couple tried to leave the country but they couldnâ€™t get their passports out of the system. In May 2013, on the afternoon that they were going to collect their passports, they were kidnapped. Driving through town, everything seemed normal – as normal as could be in Yemen with shooting on the side of the road and roadblocks that pop up overnight “like mushrooms”. â€œThey were using all the normal things that would be considered normal,â€ said Yolande.

But as soon as they realised something was wrong, it was too late. â€œJust how all your thoughts and emotions just in that few seconds and moments collides, you realise something is going wrong and you canâ€™t stop it,â€ she said. They were taken and hidden deep within rural Yemen – Yolande describes the drives through Al-Qaeda strongholds as having taken “40 years and 40 months and 40 days”. There was no news of the couple for the next few months.

An aid worker for the Gift of the Givers, Anas-al-Hamati, got wind of the South Africans’ kidnapping. He told his boss, Dr Imtiaz Sooliman, and convinced him to get involved in the hostage situation. They decided to do this by steadily raising their profile and reputation among Yemenâ€™s tribes to grow their networks and negotiating power. They hoped this would enable them to make contact with the kidnappers and bring them to the negotiating table.

At first, there was no response, but after months of waiting, Al-Hamati made contact with the kidnappers. Upon meeting them they revealed that they were Al-Qaeda and asked for $3 million in ransom for the couple.

Now that he made contact Anas was faced with the challenge of getting Al-Qaeda to back down from a huge ransom and release one of the hostages free of charge. After many days and hours of negotiating, he finally succeeded as they agreed to release Yolande.

While all of this was happening, Yolande and Pierre had no knowledge of what was happening in the outside world. On the morning of the 9th of January the couple was told that they were being released and were separated.

After 26 hours, Yolande met with Anas, who she thought was someone that she had been sold off to. A call from Dr Sooliman just before the meeting, telling her what was happening didnâ€™t ease her anxieties. Even though she had her freedom, it was bittersweet as she was told that she now had eight days to raise $3 million for her husbandâ€™s release.

The second portion of the podcast will look at what came next.