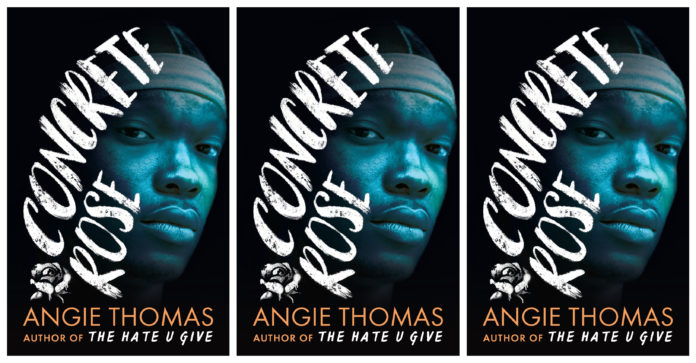 Angie Thomas really has the magic touch. All of her books are fantastically written novels which can be read by people of any age. While categorised as young adult, her books are by no means constrained to one age group. And she proves that with her latest release, Concrete Rose.

Angie Thomas arrived onto the literary scene with the release of The Hate U Give (T.H.U.G). The book was a powerful narration of police brutality and the Black Lives Matter movement from the perspective of 16-year-old Starr Carter. The book dealt with pertinent issues such as white privilege, racism, and state violence against black people. It was adapted into a movie starring Amandla Stenberg in 2018. From the movie and book, one of the things that stood out was the relationship between Starr and her father, Maverick Carter. Her father’s support and love for Starr and her siblings was the most heartwarming thing to read.

Read more: The Hate U Give And Its Star(r) Are Giving Us All The Feels

Now in Concrete Rose readers get to read Maverick’s origin story. In this book, seventeen-year-old Maverick is the main character. While it’s not a must to have read T.H.U.G before diving into this book, it will make things a lot easier to understand. There were a couple of “aha” moments when things fell into place during Concrete Rose.

The story in this book is not as highly charged as T.H.U.G. It instead lays the scene for what is to come. There’s the birth of Seven, Starr’s older brother, then Starr is conceived and Maverick comes up with her name. Maverick and King’s relationship breaks down which readers see the aftermath of in T.H.U.G. In T.H.U.G Maverick is a great father who has left the gang he was a part of and owns a grocery store. Concrete Rose goes into that journey from when he finds out he is going to be father to his decision to leave the gang.

For anyone who has read The Hate U Give, this book is filled with all of the feels. It’s not just that we get to read about Starr before she was even born or read about Seven as he is growing up. It’s also in the little details like the appearance of baby Khalil. Reading that scene knowing what happens in The Hate U Give will make you cry many tears.

Read more: Why We’re Reading YA Well Into Our Adult Years

The title of the book comes from The Rose That Grew from Concrete, a poetry collection by Tupac Shakur, one of the author’s favourite rappers. The poem basically represents the ways that someone can become something great coming from a place that’s not recognised as great. Maverick is a teenager living in an area where there is gang violence, drugs are sold freely and people are killed for no reason. But despite all that he wants to make a better life for himself and his babies.

Thomas emphasises her love of Tupac in her books. T.H.U.G was also inspired by Tupac. He popularised the phrase THUG LIFE which stands for “The Hate U Give Little Infants Fucks Everyone”. These two ideas of the concrete rose and thug life are themes from both the books. It’s the idea of trying to overcome the racist, capitalist system that was designed to destroy young black men and women living in America.

In all three of her novels so far, Thomas has tried to break stereotypes and destroy myths around black people in America. In T.H.U.G she painted an intimate picture of what it means when an unarmed young black man is killed by police and the impact on his loved ones. In her second book On The Come Up, the main character, Bri is dealing with the outcomes of the events from T.H.U.G and uses hiphop to come to terms with it.

Read more: Angie Thomas Delivers Again With A YA Ode To Hip Hop

In Concrete Rose, Thomas delivers another stunner with the focus on black fatherhood and the stereotype of the missing father. One of the best lines from the book comes from Maverick’s father who is serving time in jail. He tells Maverick: “Living your life based off what other people think ain’t living at all.”

Thomas has such a skill with writing characters and settings and Concrete Rose proves that once more.

Concrete Rose is on Exclusive Books Recommended Read for February 2020.