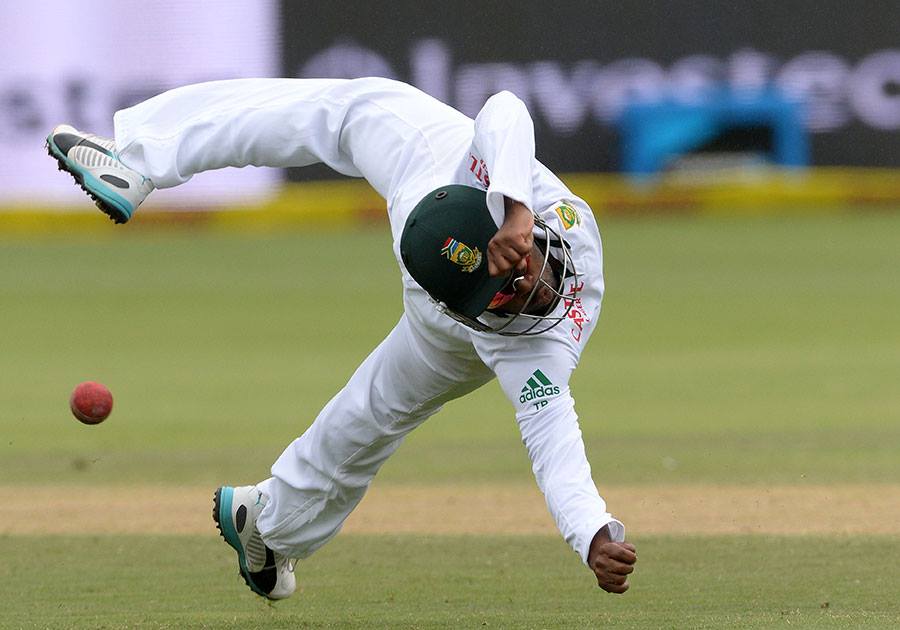 All of South Africa – or at least those who dared to watch – were on their feet. Waiting. Our nervousness wasÂ warranted.

And when the ball nicked the edge of his bat and flew towards the ropes, you knew he had met his destiny.

Temba Bavuma had lit up Newlands and South African history.

The 25-year-old became the first black African to score a century in a Test Match for South Africa.

But who is this Temba Bavuma chap, and where did he come from? Well, if you were an avid fan, you’d know, but seeing that this is a team in transition and you’re probably brainwashed into thinking he would never succeed, we are here to help set things straight. 1. On 11 February 1990, the great Nelson Mandela was released from prison. We want to say that Bavuma was also born on this day. But he wasn’t. He was born on the 17 May 1990 in Langa, the township outside Cape Town. He comes from a famous street where cricketers Thami Tsolekile and Malusi Siboto were raised. He schooled at St David’s Marist in Inanda, Johannesburg. 2. Bavuma drives and pulls with incredible balance and sweet audacity, belying his height of 162cm (five foot six inches). Not only is he the shortest player in the current Proteas setup, but he is also shorter than the legendary Sachin Tendulkar (165cm). At his franchise team, the Gauteng Lions, they call him Sachin.Â Â Bavuma maintains that height ain’t got nothing on him. 4. Bavuma made his debut in 2014 against the West Indies at St. Georges Park. In doing so, he became the first black African to be selected a specialist batsman, and the 6th black African to represent the country in cricket since 1991. Â Despite an impressive record on the domestic circuit, Bavuma has the burden of “quota” on his shoulders. As far as some commentators are concerned (mostly those from a bygone era), Bavuma has to prove to them he belongs. No pressure, son. 5. Bavuma’s debut century on January 5 came at an exhilarating pace. Not only was it scored in just 141 balls; he had effectively built on the solid foundation cast by Hashim Amla, AB de Villiers and Faf du Plessis, and brought South Africa back into the game. Also, his maiden century came in his 7th test match, not unlike another famous cricketer: Jacques Kallis. Not bad company Bavuma!