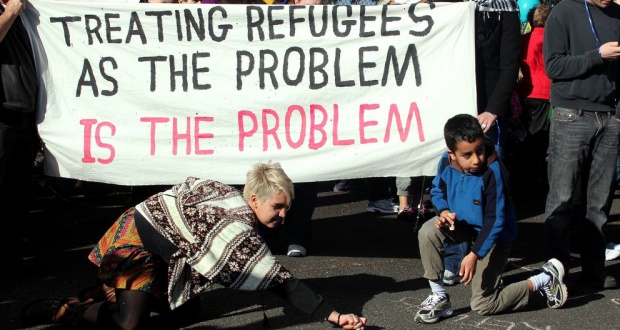 As we youth celebrate our freedom on a day that commemorates the rising up of young people against injustice, one can’t help but think about other youth amongst us who are not free and remain downtrodden. They are often invisible to us but a visit to the Home Affairs office in Johannesburg, or three other centres around the country, will reveal them to you. I’m talking about political asylum seekers, particularly from other African countries. Like the youth of 1976, and generations before them, they too are trying to survive in an immigration system that produces hardship for them, writes KHOLWANI NDHLOVU.

While not advocating for unregulated entry into the country for all one cannot help but marvel at the current immigration regime. A system creates its on problems. Think pass laws.

What many South African youth – who see asylum seekers and migrants as foreigners who don’t belong here – don’t realise, is just how much they have in common with them. Both black youth and asylum seekers are victimised by a system that marginalises them, despite laws meant to protect them. Both groups are shut out of the formal economy, struggling to get scare employment because most of them are semi-skilled or unskilled and not in the scarce skills programme provided for law. And they all are subjected to institutionalised discrimination because of their identity.

Many natural-born youth have little idea of the hardships their foreign-born counterparts face. The immigration system is a problem because it creates ‘undesirables’ based on where people come from. In an African country that espouses equality for all as a core value, migrants or immigrants from European countries are still preferred above Africans.

Spend a day at a department of home affairs office that processes asylum cases and speak to asylum seekers in the queue about their experience and you will understand just how challenging and dehumanising the application process is. The system creates undocumented immigrants because of it. There are only four centres in South Africa that process hundreds of thousands of applications.

One of the main hurdles is getting documents. This is a cumbersome process. It’s well-intentioned but weaponised by desensitised home affairs employees. Processing is slow and attitudes of officials are appalling, to say the least. Even the queue outside the building is a struggle. Applicants standing in line to get their permits renewed are at the mercy of unofficial line marshals who bully them for bribes – any complaints and they are kicked out of the line and may not get to renew their permit that day or that week. For many, it’s humiliating hours in the dark sleeping in the line.

When asylum seekers do manage to jump through all the bureaucratic hoops and have managed to get the paper, they face new challenges. The impermanence of it. The need to come back every three months and pay more money to renew it. Having to present it upon request to the police at any time. Takes one back to the days of kwela kwela, right? When our parents and grandparents had to be ready to show a similar piece of paper to police wherever they went.

These challenges discourage some, leading to them giving up and taking their chances without that piece of paper. This draws sharp parallel to the apartheid pass system where ironically the consequences of not having one were equally bad.

The worrying thing is that policy makers seem to ignore the fact that the regulations they create breed undocumented immigrants as people withhold their passports and opt to be undocumented because they know that they will get very few legal days in the country before having to leave.

This in turn enables one to be brave enough to commit crime knowing that, without their biometric data like fingerprints being captured by the authorities, they are less likely to be caught.

It’s time that we as youth understand the plight of our peers who are fleeing conflict in their homelands – just as some of our parents did a generation ago – and realise that Youth Month should also be about raising our voices to urge our for changes in our immigration system to end the victimisation and humiliation of our brothers and sisters from other nations.