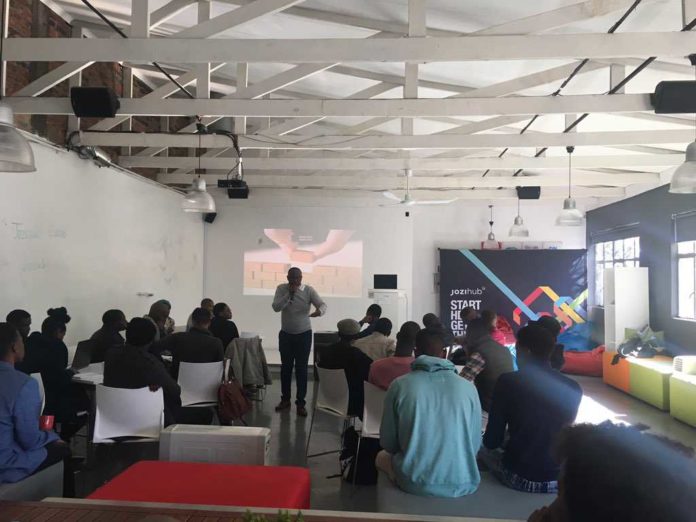 Ye! and Startup Academy partnered up to host an #UpgradeYourHustle workshop at JoziHub on the 21st of June for a group of 30 young entrepreneurs. The workshop introduced the entrepreneurs to a team of professionals from different fields to give the participants new skills and knowledge from digital skills to legal advice for business. The Daily Vox observed the workshop and spoke to some participants to find out the value of such workshops and whether institutions like Startup Academy are good alternative institutions to gain skills in entrepreneurship than university.

Startup Academy is an entrepreneurship education institution that facilitates obtaining core knowledge of starting a business for aspiring entrepreneurs. It offers programs focused on developing entrepreneurial skills and introducing young entrepreneurs to resources they can use in their endeavours. On Friday, June 21, Startup Academy hosted a full day workshop, bringing in legal advisers from the law firm Bowmans, finance tools speakers from Yoco, and digital marketing professionals. Participants engaged with business around 44 Stanley and were given workshops and networking opportunities.

With South Africa’s economy growing slowly and youth unemployment being as high as it is, at more than 50%, and students still struggling to get into university and staying because of numerous difficulties, particularly fees, entrepreneurship seems the way to go. The question becomes where the best place to get these skills is.

The Daily Vox asked participants the value of the experience at the workshop and particularly, whether getting entrepreneurial skills at institutions like Startup Academy are viable alternatives to more traditional institutions of higher education and training.

Sindi Zulu, who has a hair business said she found the workshop “very” helpful, “especially the digital marketing part”. When asked whether this was a good alternative to traditional university, Zulu said, “very helpful. If I had received this opportunity five years back, after I finished high school, I think I would be very far”.

Lebo, who wants to become an entrepreneur said, “Schools and universities prepare you for work life but not entrepreneurship” when asked which is more beneficial to people who want to be entrepreneurs between such events and workshops and university but indicated that both have value.

Zandile, who frequently attends such workshops, said, “none is better than the other [between traditional universities and entrepreneurship institutions], it’s just filling up a need to fast track the economy”.

A lot of the participants felt the need for such workshops and institutions like Startup Academy but still saw some value in having a degree or diploma of some kind in anything. However, admitted that some information shared in the workshop was largely unknown to them. Worryingly, many of the participants were not aware of the legal side of business and dealing with tax, which the presenters from Bowman’s taught and this ended up being the longest session.

Notably, the session on digital marketing took the second longest time, with participants wanting more and wanting to know how to use social media and tools such as WhatsApp business.

Speakers reiterated that 8/10 of small/startup businesses fail within the first 12 months because of lack of such skills and knowledge. This is the gap that Startup Academy wants to fill.

Phenyo, who whose startup business centres around business marketing, found the workshop helpful saying “overall, the session was very helpful and that being in a space where you get to hear other people’s views also helps a lot because it could either confirm what you’ve already established or in some cases, bring about more questions”.

When asked about traditional university and entrepreneurial institutions, Phenyo said: “I would recommend varsity and supplement it with Startup Academy… but varsity because you have a large number of people willing to talk to you just because you have a student card.” However, he did note that a lot of skills taught at university are available online and are an option if you want the skills and the paper saying ‘degree’ is not as important.

Because of the high youth unemployment rate, entrepreneurship seems the way to go for the youth; however, what the workshop showed is that there is a gap that needs to be filled in terms of entrepreneurial skills and knowledge, and people’s want (arguably, need) to be entrepreneurs that lead to 8 out of 10 of them failing by the end of a year. All the participants reiterated the helpfulness of the workshop and their want for more sessions.