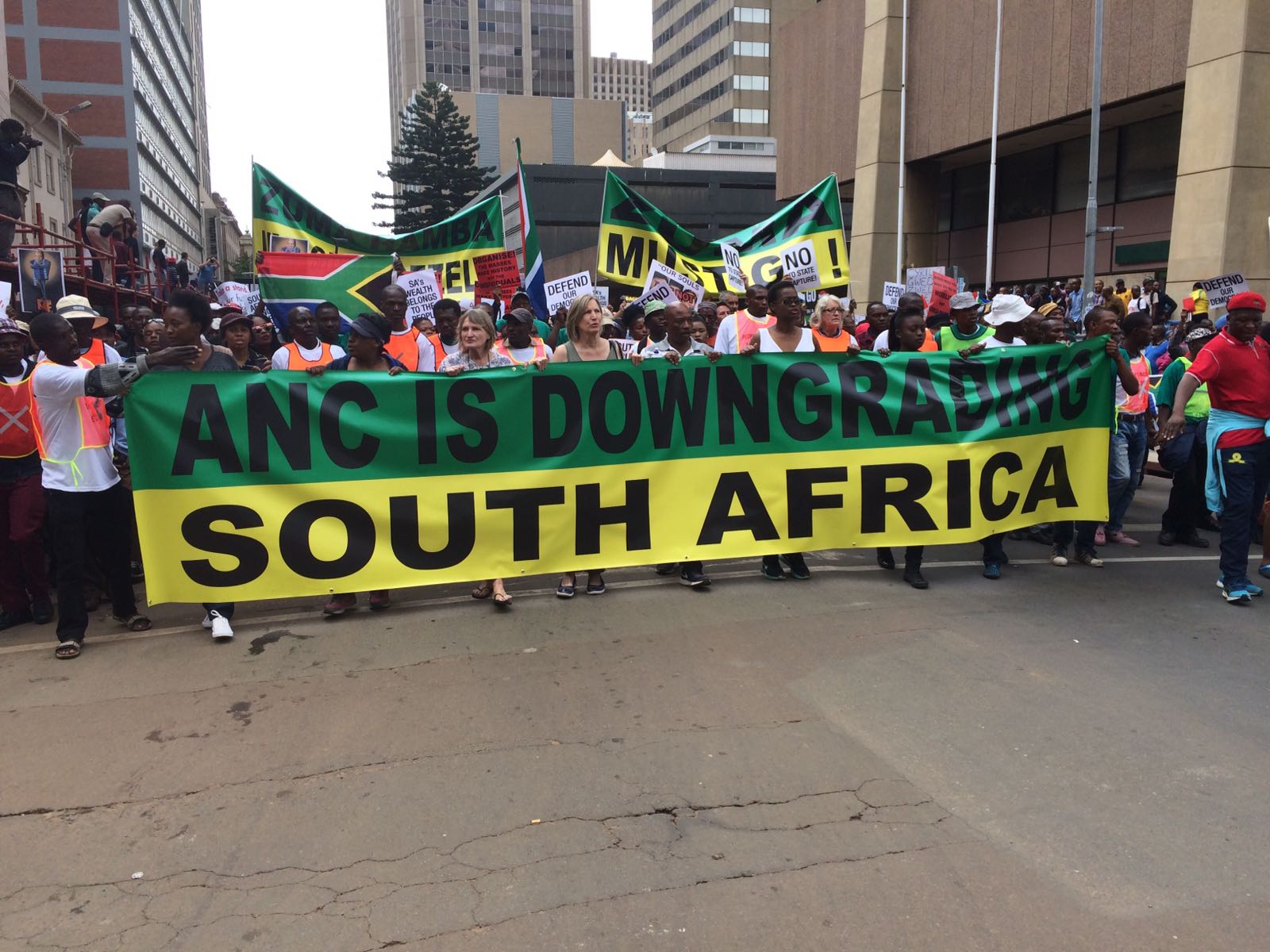 Thousands of South Africans turned up in Pretoria to demonstrate against President Jacob Zuma on Friday, and students made up a large contingent of the marchers. The Daily Vox team spoke to some young people about why they were there and whether this protest was in any way similar to the #FeesMustFall protests. I came to try and make a difference for the future of my country, about the state itâ€™s in now. I am hoping that the president can realise that he has done wrong and can step down, for the benefit of his country, and Iâ€™m hoping the country can change and become a better place. This is my first protest. After this, I wonâ€™t stop, if there are other ways I can get involved I will. I donâ€™t think we can stop here otherwise, I think I can he can get away with it. I know that the country hasnâ€™t gotten involved in other protests, but I think this one is bigger because it is the future of our country, and if affects all of that.

I wanted to stand for the country, and also being here for once to document my version of whatâ€™s happening, instead of a more biased version that might be in the media. Essentially I want to witness a change of a better government, leader, a more transparent country so we can move away from the past issues and the current. Our country is a certain way because of one individual. If we get rid of one individual, a lot of things can change for the better.

I donâ€™t necessarily think this will change the face of protests in South Africa. I can be an example of a more peaceful approach, but I donâ€™t think that it wonâ€™t change ever. I feel like this time we can move forward, because today itâ€™s a bit more diverse than normal protest, so I think that itâ€™s the right way forward.

The people uniting is a big thing and we are [here] in support of #ZumaMustFall because he has done so many corrupt things within the years heâ€™s been in presidency so itâ€™s about time that our voices are heard now. We expect him to step down and that we unite as a country. We are just here [today] and as people move forward, we will too. We came here to protect our country and make sure that we try and get out of junk status. Everyone is so fed up, because itâ€™s enough now. Itâ€™s not about race, itâ€™s not about anything else. We closed down as an organisation, to fight for our country. On the 18th of April, he needs to be impeached. Because of the state the country is in, itâ€™s united already. It might be from different walks of life, but we are all witnessing the same shit. So everyone, it doesnâ€™t matter what background, where youâ€™re from, it impacts us as a whole.

Look at our economy, number one, look at the Nkandla, the [state capture] report. We still donâ€™t know whatâ€™s going on with that. Look at the Marikana people. Look at Andries Tatane in Ficksburg, what happened to him. He was protesting, he died. And then now, weâ€™re here, hoping that he will step aside, because now the economy is going down.

I think the Fees Must Fall protest, that was for the students. It had nothing to do with the country as a whole, that was a smaller protest for them. I think this is the country as a whole. This is much bigger – not saying that that wasnâ€™t something that wasnâ€™t huge – but this impacts everything, kids and their futures, weâ€™re gonna lose all our investors, itâ€™s quite big.

Reporting and images by Caroline Vakil and Nolwandle Zondi