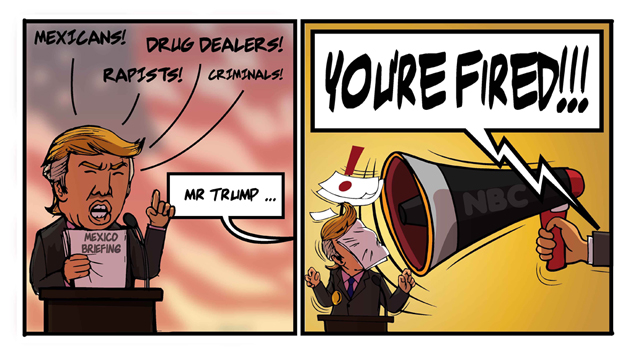 Businessman and now Republican presidential candidate Donald Trump caused quite a furore when he announced his candidacy a few weeks ago. His speech contained several derogatory comments about Mexicans:

â€œTheyâ€™re bringing crime, theyâ€™re rapists, and some I assume are good people, but I speak to border guards, and they tell us what we are getting,â€ Trump said, among other comments.

The fallout has been ongoing â€“ with several business partners, including NBC, taking the chance to tell the Trump that â€œheâ€™s fired!â€ â€“ an ironic use of the line he was so happy to tell contestants in his business-oriented reality show The Apprentice.

Media companies NBC, Univision, Ora TV, Televisa, and department store Macyâ€™s are among those companies to Â cut all ties with Trump, and several individuals have also refused to participate in his pageant.

The latest person to enter the fray is Pauline Vega, the reigning Miss Universe â€“ the beauty pageant is owned by Trump â€“ who called his comments â€œhurtful and unfairâ€.

That catchphrase must be ringing in his ears.