Home Features Youth Day: “I do not celebrate it or commemorate it”
WhatsApp
Facebook
Twitter
Email
Print 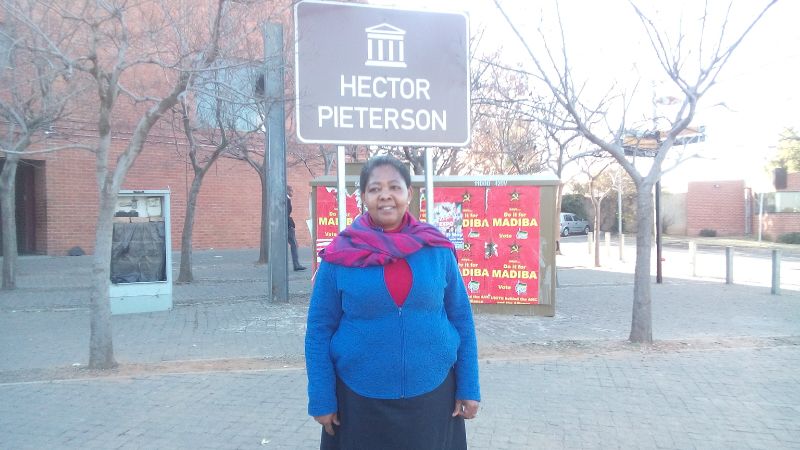 On June 16, Soweto students embarked on a march against Bantu education and the use of Afrikaans as the language of instruction in schools. Antoinette Sithole was only 16 years old on the day she lost her brother, Hector Pieterson, whose last moments were captured in an iconic Sam Nzima photograph flashed around the world.

Of the three people in the picture, she is the only one left to speak out about the brutality of the day. Sithole, who now works at the Soweto museum named in her brother’s honour, spoke to UYANDA SIYOTULA about life after the massacre.

Take me through your emotions on that day.

I was still young, I was very confused and sad. I was even scared to go tell my family what happened. Losing my brother was something else… it was painful. As emotional as it was, I still honour that day because it was the turning point of my life and it will always be important.

How did losing your brother and everything else that happened on June 16 change your life?

I am doing interviews, sharing the story and a lot of people still want to know what happened. At first I did not want to talk about the day. Maybe I was still emotional and had many questions and less answers. It motivated me even though it had to take a painful route but it was bound to happen and I am part and parcel of what happened on that day.

The picture was all over the media. How did you and the family deal with his death and that attention?

My mom never shed a tear when she was told about Hector’s death. At some point we were stressing because we wanted to see her reaction. Two years later when we were talking about Hector towards his birthday I asked her why she did not cry. She said she took it as if “they were talking with Hector and after parting ways he was knocked down by a car”. It was very confusing but later I understood that she was blocking the truth rather than facing reality. The media did not affect us much. We comforted each other as a family through the years

What were some of your activities then? After Hector’s death did you become more political?

I was 16 and we used to play in the streets with other kids, but I no longer played much because I was now maturing. I was brought up by a religious family who instilled religious values and my teenage years were fantastic. Yes, of course a lot changed after that, I would be called in for questioning or to make a statement. But I was never political, even then. There were organizers of the march and we were just students. Till this day, I am not involved in politics.

How do you feel about June 16 celebrations and commemorations?

Those who are celebrating say it is for the victory. But for me, I would appreciate it more if people could come together and have a moment of silence, light a candle or something. You know, put themselves in the shoes of those who participated on the day and lost their lives. So I feel it should be commemorated rather than celebrated. It would make me happy and would be the best way to honour them [those who died].

The youth of South Africa, the same age as the 1976 students who protested, do you think they are aware of our history and what that day means? And does that reflect in their celebrations?

I cannot blame the kids for the way June 16 is celebrated, because they are not the ones who organise these events with music and artists. But I feel as though the youth today is not taking the struggle further. They do not sweat, they cannot even stand up against issues of drugs, teenage pregnancy, HIV in their communities and schools. If one person could stand up, say – let us fight drugs’, then the whole school and community will join in. That fighting spirit we had has died.

What is the biggest struggle facing the youth today?

Drugs! If you want to kill a nation, introduce drugs and you will see. I see pregnancy but drugs are a big problem. Every time they introduce new drugs. Now there is whoonga and nyaope and they are destroying the future of our kids. It is a big worry.

What is the meaning of June 16 for you?

You know at times I don’t know how to describe it. It is a painful day. I never thought I would be in that situation but life is life and it’s complicated. I will forever honour the day; to me it is the greatest day ever. Yes, we are celebrating and commemorating it now but to me, blood was shed and I lost my brother, so for as long as I live I will remember it.

How do you usually celebrate or commemorate the day?

I do not celebrate it or commemorate it because I am up and running on the day. People are inviting me here and there to give talks. Sometimes I go to work at the museum because we are usually hosting and busy. This year I do not have anything planned. I will probably be here working.