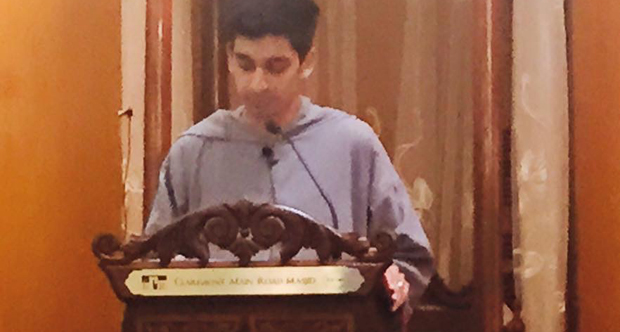 Ahead of Youth Day 2015 activist and chairperson of the Muslim Youth Movement, Minhaj Jeenah, gave a powerful talk at the Claremont Mosque reiterating the need for youth activism and Muslim involvement in broader South African society.

In a stark and honest manner, Jeenah criticised Muslim apathy and highlighted how Muslim political involvement during Apartheid was labeled as kufrÂ â€“ disbelief.

â€œThere is a Muslim identity beyond the heroic anti-apartheid Muslim â€“ which we so proudly claim. In order for us to properly progress with our political participation, we need to speak about this. We need to speak about how the majority of Muslims, often with Ulama encouragement, were conveniently apathetic towards apartheid and forgot the fiqh imperative that silence in the face of injustice is tantamount to tacit approval,â€ he said.

Jeenah mentioned Muslim anti-apartheid activists â€“ including his mother, Shamima Shaikh â€“ and how their â€œrevolutionary spiritâ€ should live on.

And while young people â€“ including Muslims â€“ are questioning authority and playing important roles in current student activist movements advocating for transformation and workersâ€™ rights, Jeenah says that Muslim student organisations are not doing enough.

Jeenah also indicted the â€œprominent eliteâ€ of the Muslim community, who â€œmassage the shoulders of capitalism on the boards of big businesses, ignoring the real needs of the poor and exploited masses of our countryâ€.

Jeenah says that Muslims must remain uncompromising when it comes to justice, and called it a â€œmatter of principleâ€ to â€œalign Islam with the revolutionary anger of the youth of 1976â€.

You can read the full text of the speech here.