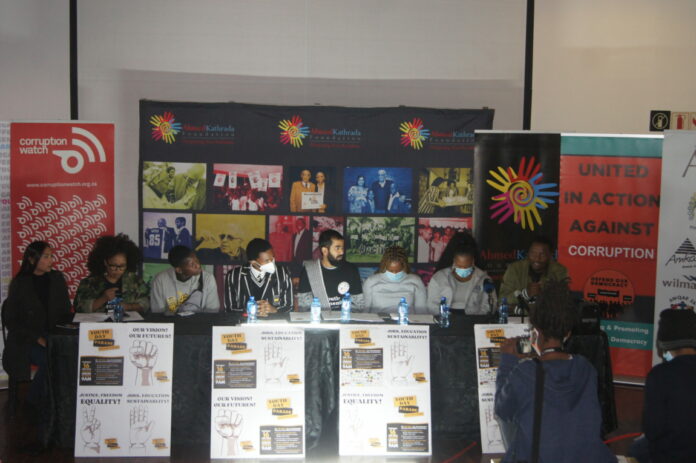 The Ahmed Kathrada Foundation (AKF) Youth Activism Programme (YAP) is hoping to gather thousands of young people in Pretoria. This is to “reclaim the spirit of June 16” through a Youth Day parade for Justice and Change. There was a media briefing in Soweto at the Hector Pieterson Museum on June2. Here’s what you need to know about the parade.

How did they come up with the initiative with regards to the Youth Parade?

The idea for the initiative emerged from a need to celebrate young people’s activism and the power that they possess to influence change. It was influenced by young people’s need to organise and act together to ensure that the issues facing young people are taken seriously. They put out the call for a broad range of young people and civil society groups to come together to call on the government.

Youth Day: “I do not celebrate it or commemorate it”

What organisations are involved/have pledged their support?

At the time of the media briefing, around 70 organisations had pledged their support for the parade and the movement. (Author’s note: The Daily Vox is one of those organisations) The organisations range from those dealing with corruption to the climate crisis and gender-based violence and everything in between. Some of the organisations spoke during the media briefing pledging their support. Otsile Nkadimeng, a Grade 11 learner and climate justice activist made a powerful statement by saying he was supposed to be at school preparing for examinations but due to the urgency of the climate crisis, he had to be at the briefing. There were also representations from Equal Education, Corruption Watch, Fight Inequality Alliance amongst others.

Why is it important to mobilise on the ground, and not just on social media?

Irfaan Mangera, YAP manager said that it is important to go beyond the social media streets. This message was echoed by several others on the panel who said they didn’t want to just be armchair critics. The supposed apathy of young people was also addressed. The people present at the briefing said this action is meant to show that young people are participating and calling for change.

Motheo Brodie from Section27 said: “We have no option but to simply pick up the baton. Often when people speak about the youth in this country, often words like apathetic and uninterested are used to describe us. But I think this action demonstrates that this is not the case. The youth of this country are frustrated. This action shows that we are not just armchair critics. We are mobilising and organising and presenting very clear demands with clear solutions…”

What actions are being done in the build-up to the parade?

The AKFYAP and the other organisations have been calling on other groups to join in and endorse the call.

What is the plan of action for June 16?

On June 16, they plan to gather at the Loftus Versfeld Stadium in Pretoria. From there, the parade will march to the Union Buildings. At the Union Buildings, they plan to hand over a memorandum to the Presidency. The memorandum is still in the process of being finalised. However, the demands are going to speak to issues like youth unemployment, gender-based violence, the climate crisis and education amongst others. During the briefing, a question was posed regarding the inclusion of queer and disability issues within the memorandum but also the inclusion of the queer and disabled community in the parade and ensuring their safety. There have been many murders of transpeople without any recognition or acknowledgment of this from government. Mangera said this will be addressed and included in the memorandum process.

How has the process been of reaching young people not in the urban centres?

Many young people from around the country and particularly those not in the urban centres won’t be able to attend the march which is only taking place in Pretoria. However, there was acknowledgement of these voices. The YAP mentioned that they have been speaking to these young people and getting their endorsement and inputs.

What needs to happen after the parade?

After the memorandum has been handed over to the Presidency, they will have a set number of days to respond. Dudu Mmeti from the Defend of Democracy campaign said they don’t just want acknowledgement of the memorandum. Instead they want the Presidency to give clear time frames for when they will be addressing and presenting solutions to the demands. There are also plans for a solidarity action plan and other monthly actions after the June 16 parade.