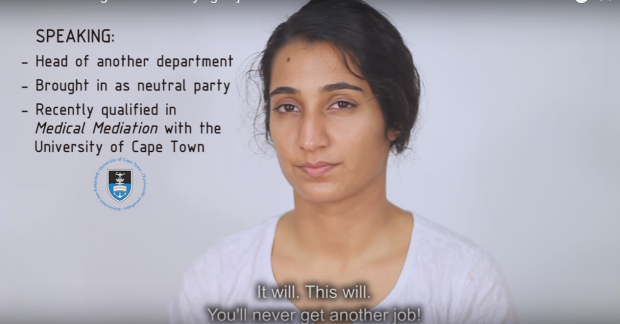 Dr Yumna Moosa, whose video about harassment and racism at a public hospital went viral last week said the support sheâ€™s received since publishing the video has been overwhelming. Justice however is yet to be served.

The Daily Vox reached out to the HPCSA for comment on Monday but no response has been forthcoming.

In the meanwhile, Moosa also has a CCMA hearing scheduled for the 5th of October and has already attendedÂ one hearing. She described the hearings as â€œcrazyâ€ as representatives of theÂ hospitalÂ accused her of producing fraudulent documents to show that she is now able to practice as a doctor, and that their decision has, in fact, been overturned. According to Moosa, theÂ hospital’s only defence is that she made up the whole story about harassment as “a smoke screen”.

So,Â even though MoosaÂ has been assessed and found to be competent, her former employers are still pushing for her to be seen as â€œclinically incompetentâ€. This, despite, letters from various other medical practitioners testifying to her abilities as a medical doctor. Below isÂ one of those reference letters. The video released by Moosa documenting audio recordings of conversations between her and various management officials at the Durban hospital, where she alleges sexual harassment, and bullying,Â has amassed thousands of views in the five days since it was released on YouTube.

â€œWhat has been the most powerful part has been the number of messages Iâ€™ve received, from young women doctors mostly, but young women professionals generally whoâ€™ve said theyâ€™ve had similar experiences. And they havenâ€™t been able to speak about it for a lot of the same reasons. And that felt validating because it was an important thing to say. It was a message that just wasn’t coming out because saying it openly was so scary,â€ MoosaÂ said.

The video also led to the Department of Health at UCT, Moosaâ€™s alma mater, coming out in support of her.

SheÂ said she opted for video to tell her story as it allowed her more control over the tone of her content.

â€œI didnâ€™t want it to come across as another rant about how bad things are and how terrible doctors are treated,â€ she said. â€œI wanted it to be positive and constructive.â€

A Facebook page has been created as a safe space for people to talk about their experiences of bullying and harassment in the professional workplace and for people to seek support and get advice from others.Â An online petition calling on the HPCSA and the Minister of Health to stop the bullying of junior doctors was also started and has collected over 500 signatures.

Moosa said that she’s received responses from other people who have had the same experiences but that it difficult for others to speak out because they are still in the profession and it is like having a target on their back. She said that the only reason she could speak out about this was because she is no longer doing medicine, otherwise it would have been too difficult.

Featured image: screenshot from the video

Editor’s note: This story has been updated and edited to clarify Dr Moosa’s remarks.Â