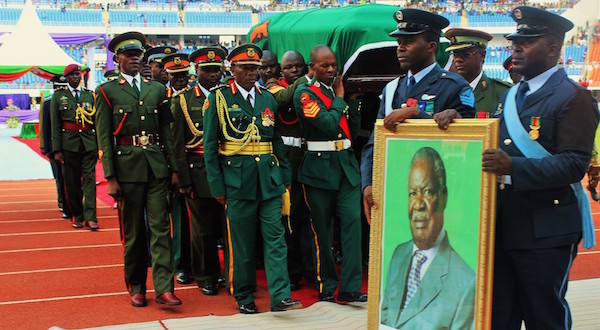 Lusaka, Zambia – Zambia’s President Michael Sata was given a warm sendoff by mourners at Heroes Stadium yesterday, when he was finally laid to rest at Embassy Park in the capital city, Lusaka.

Sata (77), who died in a London hospital last month, is the second Zambian president to die in office. He had served as the countryâ€™s president for just three years. Sataâ€™s predecessor, Levy Mwanawasa, died in 2011 after nine years at the helm.

While Sata’s succession remains an open and hotly-contested issue, the brash “King Cobra” is remembered by many Zambians and regional leaders as a man of people.

His funeral was attended by up to 50,000 Zambians alongside regional heads of state and dignitaries, including Zimbabweâ€™s President Robert Mugabe and Kenyaâ€™s President Uhuru Kenyatta. A Bemba woman from Sata’s tribe sits in the crowd with her head doused in white powder as part of the traditional mourning practice of chimbuya. Mulenga Sata , Sataâ€™s son and the mayor of Lusaka, pays tribute tohis father. Mulenga is seen as potential candidate for the presidency. An election for a new leader is expected to be held by the end of January. The front-runner to succeed Sata is Zambiaâ€™s minister of defence and justice, Edgar Lungu, who currently leads the Patriotic Front (PF). The PF is yet to choose a presidential candidate but Lungu is widely seen as the popular choice. A member of the military police stands over Sata’s body.