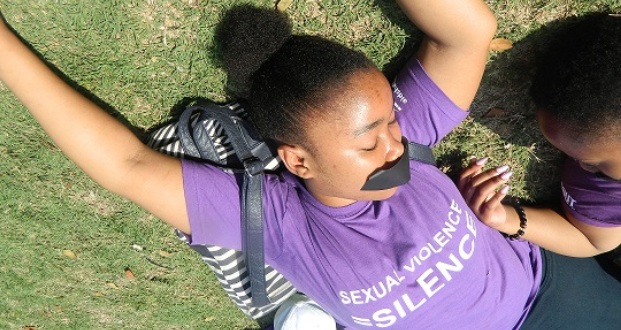 Nine years after he first decided to use a rape metaphor to comment on the state of the nation, cartoonist Jonathan Shapiro, better known as Zapiro, is back at it again. In 2008 it was the rape of Lady Justice. Now in a copycat cartoon, itâ€™s President Jacob Zuma and crony capitalist Atul Gupta who are set on violating South Africa. Zapiro has heard all the criticisms now being lobbed against him before, several times over. So does he not care? Or does he still just not get it?

When Zapiro drew his original cartoon, he got hauled before the Human Rights Commission (SAHRC) – but even then it wasnâ€™t because of his depiction of the violation of a black woman, it was because the Young Communist League had taken it upon themselves to protect Zuma from defamation. The cartoon, they said, had violated his right to dignity.

In any event, the SAHRC cleared him of any wrongdoing, saying â€œthe right to freedom of expression outweighs Zuma’s right to dignity”.

What wasnâ€™t raised at the time was the way the woman being pinned to the ground in the cartoon could easily stand in for women in South Africa, who face overwhelming odds of abuse in a country that can be deeply misogynistic.

We canâ€™t believe weâ€™re still having to say this (over and over again) but using rape metaphors in this context isn’t smart or insightful – it’s tone deaf and it normalises rape culture.

In defending his cartoon, Zapiro hides behind the dictionary definition of rape – he was at great pains to explain to ENCA’s Joanne Joseph that the term â€œrapeâ€ is often used in political or geographical contexts.

But frankly this is a cop-out. Because itâ€™s simply untrue that if we here in South Africa think of the word â€œrapeâ€, we also think about â€œthe wanton destruction or spoiling of a placeâ€.

By law,Â Zapiro is free to draw what he likes and say what he likes. But he shouldnâ€™t be surprised when we draw conclusions about the kind of person he is and the kinds of beliefs he holds.

When the cartoon was published, Zapiro was almost immediately called out for his casual use of a tired woman-hating motif.

Zapiro is racist misogynist and we’ve tolerated his prejudicial content masked as ‘satire’ for too long. #EnoughIsEnough

That #Zapiro cartoon is beyond disgusting. Rape shouldn’t be used to prove a point. Don’t educate me on satire, I know what it means.

If he has the mental capacity to do so. Black women’s bodies are actual sites of violence. The violence we face every day is real.

Politics lecturer Lubna Nadvi asked why Zapiroâ€™s go-to metaphor was the female-centred rape, rather than, say, a castration.

So why not depict what is happening to SA as a castration rather than a rape? As emasculation & loss of manhood? Impotence? #Zapiro

Radio host Eusebius McKaiser was particularly vocal in his opposition to the cartoon. When a caller agreed that South Africa was being â€œrapedâ€ by Zuma and the Guptas, McKaiser asked whether the cartoonist could really not find any other way to describe what isÂ currently happening in the country.

â€œIf you analogise from rape at the very least youâ€™re showing horrific, horrific ignorance of the nature of rape. No South African is so stupid that you need rape to be banalised in order to understand what a ruin Jacob Zuma is,â€ McKaiser told the caller.

Listening to McKaiser, a rape survivor, speak on the issue is cutting.

Wits lecturer Barbara Boswell said the cartoon used pernicious stereotypes and was a form of violence that was â€œtriggering for women who have experienced rape and sexual assaultâ€.

â€œIt is a form of white entitlement to feel perfectly ok representing black bodies without a modicum of reflexivity and acknowledgement of white privilege,â€ she wrote.

Can Zapiro really claim that he is unaware of the pain he has caused to people in this country who have been the victims of rape? We can only assume that he believes his right to draw this cartoon trumps other peopleâ€™s pain.

Zapiro has come under fire several times before, for his tone-deaf and borderline racist cartoons, including several which used rape metaphors, one which portrayed President Jacob Zuma as a penis, and another that depicted NPA boss Shaun Abrahams as a dancing monkey.

On Tuesday Zapiro again missed the point of the criticisms levelled against him although whether he was genuinely puzzled or deliberately obtuse is unclear.

HeÂ told TimesLive that he knew the cartoon was shocking. â€œPeople have said why use the rape; I am using it because it is shocking but I think that you can seeâ€š any viewer can see the empathy that would be generated by this cartoon for the person who is being raped,â€ he said.

Given the ruckus over the cartoon, continuing to insist that “any viewer can see the empathy” is clearly a stretch.

When speaking to eNCA, he doubled down on his decision to use the rape metaphor, saying Zuma was â€œceding the rape of the country to other bosses in the form of state captureâ€.

â€œEveryone is saying it and everyone is using metaphors like this, theyâ€™re not always visual ones but people are saying these things, and I suddenly thought, well thereâ€™s a need to do it, to revisit the notion,â€ he said.

But is â€œeveryone is saying it and everyone is using metaphors like thisâ€ really a good reason to draw something that you already know will cause harm to thousands of fellow citizens? Just because other people are normalising rape, does that mean you should too?

On Wednesday, the Rape Crisis Cape Town Trust wrote a letter to the editorÂ of the Daily Maverick saying Zapiro was demonstrating the insidious nature of rape culture.

â€œWith more than 50,000 sexual offences reported to the police each year, a cartoon depicting the country as a woman after the act of being raped by its president is not just shocking: it is going to collectively trigger the memory of an intensely personal event and evoke overwhelmingly painful emotions for each one that remembers their own rape. And there are many. Far too many.â€ – Kathleen Dey, Rape Crisis Cape Town Trust

There were 43,195 reported cases of rape in South Africa in 2014/2015. This works out to over 100 rapes a day. These statistics are no secret. They have been widely reported nationally. And yet there were people on social media and calling into radio to defend Zapiroâ€™s right to free speech.

We would argue that by normalising rape Zapiro’s cartoon does more damage to the country than it does to highlight the public anger at what is happening in government right now. After all, we’re currently looking at “rolling mass action” in opposition to Zuma, while many South Africans, including Zapiro, are still brushing off very real concerns about the way rape is minimised and brushed under the carpet daily.

Again, no one is saying Zapiro doesnâ€™t have a right to draw hurtful, misogynistic cartoons any time he feels like it.

Wits journalism professor Franz Kruger says Zapiro seems to have quite deliberately and thoughtfully chosen this clearly shocking image to capture what he sees as a really appalling state of affairs and that cartoonists, particularly satirists, are given wide leeway to make the points they want to about society. Itâ€™s also unlikely that Zapiro has broken any laws or even contravened any press standards. (Those who feel he has can approach the Press Council for a ruling.)

Weâ€™re just saying itâ€™s a soulless thing to do. Itâ€™s also quite lazy – a point which was made by many on social media.

Media Monitoring Africaâ€™s William Bird told us one of the problems he had with the piece was that it seemed to put rape and corruption on the same scale. â€œThey both have profound impacts but to suggest that theyâ€™re equivalent I donâ€™t think is appropriate and IÂ certainly donâ€™t think is helpful,â€ he said.

Bird said the cartoon implied that what Zuma is doing to the country is forced and non-consensual. In this sense, Zapiroâ€™s beloved rape metaphor simply doesnâ€™t stand up. Weâ€™re well aware that whatever Zuma is doing to the country, he is doing with the full backing, not just of the four people he names in his illustration, but with the backing of pretty much the entire ruling party (even if some, like Gwede Mantashe, had to be whipped into line).

â€œThereâ€™s far too many people that are complicit in that particular process that are happy to allow the president to go about that,â€ said Bird. Zapiro was clearly trying to express outrage and shock, he said, but â€œyou need to be more creative as a cartoonist, to find better ways to express thatâ€.

Zapiro was long ago written off by many in society who choose not to buy into his use of sexist and racist narratives. It’s a pity that his work still has such wide reach and is still able to hurt so many who encounter it even casually.