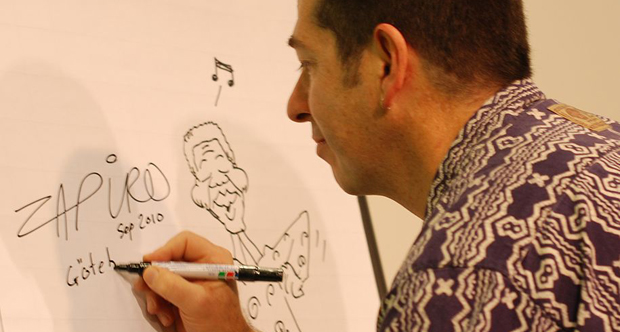 Cartoonist Jonathan Shapiro, aka Zapiro, is once again at the centre of controversy. His Tuesday cartoon for the Mail & Guardian shows the inside of President Jacob Â Zumaâ€™s mind, with little space left for considerations like â€œrunning the countryâ€ and the â€œMarikana reportâ€, and most space taken up with â€œavoiding prosecutionâ€ and â€œhome redecoratingâ€ â€“ an allusion to Nkandla.

However, what really got everyone going was Zapiroâ€™s potshot at Zumaâ€™s personal affairs, with a great deal of space in the presidentâ€™s brain allocated to â€œfinding 5th wife/next mistressâ€. Writer TO Molefe summed up the criticism of Zapiro, referring to him asÂ a â€œcultural chauvinistâ€ with â€œbigoted judgementsâ€, and pointing out that he was classing different categories of things together, as only a â€œsneering white liberalâ€ would do.

Attached to this online rant was the hashtag #ZapiroMustFall. Not everyone, however, agreed with Molefeâ€™s take â€“ although he did have plenty of supporters.

Some people shared the view that â€œZuma opens himself to parody of all aspects of his lifeâ€.

@Sisonkemsimang @robkowa Don’t get offence. Zuma opens himself to parody of all aspects of his life. Darknativeman must be culturally secure

However, others claimed Zapiro was ignorant of African culture.

@mailandguardian deeply offensive to suggest the President is preoccupied with mistress or 5th wife chase, the way you view African man…

Zapiro refers to Zuma’s possible next wife as “mistress” because he does not understand how our culture works and is not prepared to learn.

Using satire to take on powerful figures is always a fine balance. What do you think of Zapiroâ€™s image? Was it fair comment â€“ â€œpunching upâ€ to Zumaâ€™s power? Or a step too far â€“ â€œpunching downâ€ on traditions of non-monogamy? Let us know in the comments box below.

Firdaus Khan is a media studies masters student at Wits University. She has a keen obsession with all things Disney, but is also passionate about hard-hitting news.