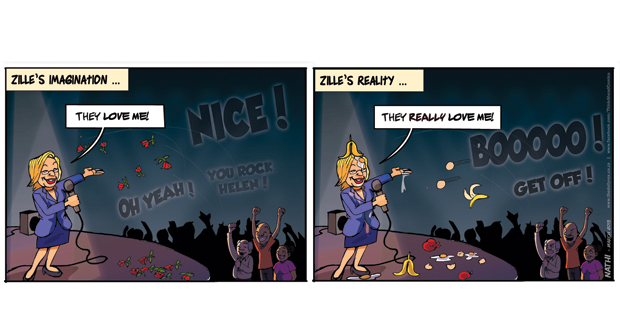 According to IOL, DA leader Helen Zille was booed and confronted with chants of â€œCape Times! Cape Times!â€ by concert-goers at the Cape Town International Jazz Festival where she appeared on stage with DJ Suga. Zille and the DAÂ wereÂ heavily criticised after it emerged that the partyÂ had chosen not to renew any of its subscriptions with the Cape Times newspaper, which Zille accused of â€œshoddy journalismâ€.

But Zille has claimed that she was unaware of the booing,Â saying: â€œI truly didnâ€™t hear any of that. I just felt fun and warm vibes. And I certainly only saw friendly faces.â€

Zilleâ€™s perception, however, might be more self delusion than reality distortion field.