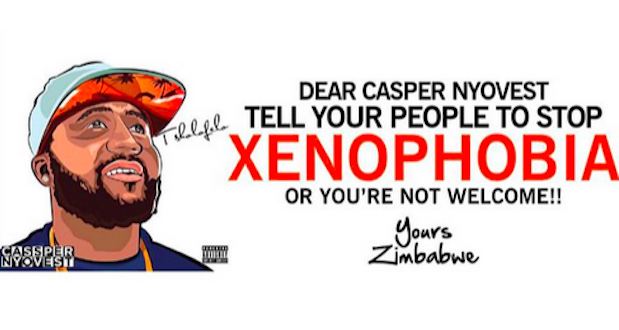 Nyovest, the man behind hip hop hits Gusheshe and Doc Shebeleza,Â has been advised to cancel his performance in Bulawayo after being threatened by Zimbabweans on social media. A Facebook post by Zimbabwean musician, Augustus Baba Zaine Verunga, helped spur the furore after he called on Zimbabweans to boycott Nyovestâ€™s show.

â€œThis show will not happen, and if it does it will not end well. We’ll send a message to every SA citizen watching, partaking and promoting XENOPHOBIA,â€ Verurunga wrote on Facebook.

Just got a call from my mom and she thinks I shouldn’t go to Zimbabwe for my show next week after reading this. pic.twitter.com/ZoHdVBtXTS

Instead, Nyovest denounced the xenophobic attacks that have erupted in KwaZulu-Natal and reaffirmed his commitment to perform in Zimbabwe. â€œI do not support xenophobia,â€ Nyovest wrote on Facebook. â€œWe are one AFRICA therefore we will dance together. I will come perform for my brothers.â€ Zimbabweans on social media havenâ€™t backed down, however, saying that Nyovestâ€™s remarks are insensitive. â€œSo you want Zimbabweans to be dancing while their brothers and sisters are being killed? Donâ€™t you think that will be insensitive? Cancel that show,â€ a commenter wrote on Nyovestâ€™s wall. The xenophobic attacks in KwaZulu-Natal have frequently and violently targeted Zimbabweans, among other nationalities, with looters forcing them to flee from their homes and businesses. â€œThe people from South Africa chased me out. We came here to work and not to steal or do some wrong thing,â€ a Zimbabwean now living in a refugee camp told EWN. While some have denounced the calls to boycott Nyovestâ€™s show as further fuelling xenophobic tensions, City Press lifestyle editorÂ Gugulethu Mlungu pointed out that boycotting is a political act, and people have the right to protest.

A boycott (efficacy aside) is a political statement, and frankly people should & can organize however they want. So the boycott must happen. â€” Gugulethu Mhlungu (@GugsM) April 16, 2015

Meanwhile, someÂ Zimbabweans have posted threatening comments on Nyovestâ€™s Facebook page. One Facebook user wrote: â€œCasper show your face in ZIM and suffer the wrath of all Zimbabweans. i will definately [sic] stone you to death.â€

On Thursday VurungaÂ posted on Facebook that his initial call to boycott â€œwas not meant to incite violence anywhereâ€ and that he wishes Nyovest â€œthe very best on his show in BYOâ€. Â The musician has since been posting online messages he has received from South Africans who have condemned their xenophobic compatriots.