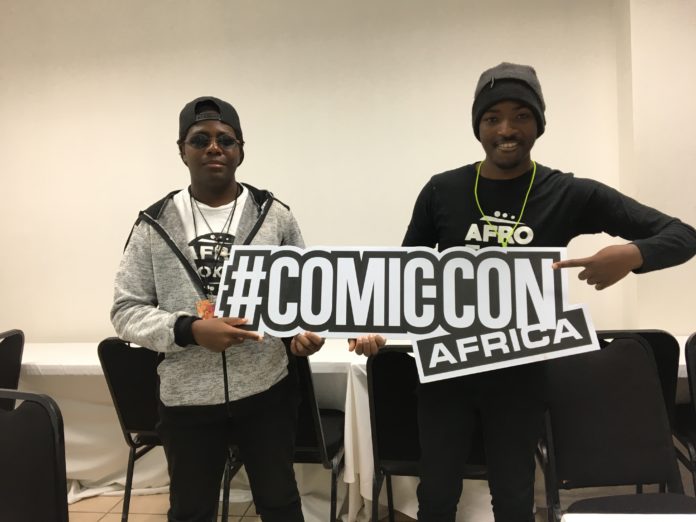 Amongst the noise, and excitement of Comic Con Africa 2019, there was a panel going on about Africans in Animation. Two of the panellists were Kudzai Ngundu (KN) and Elisha Ngundu (EN), animators and creators from Zimbabwe. While Zimbabwe doesn’t have a huge animation industry, the pair are hoping to change that. They are part of Afro Tokyo, a pre-production studio based in Harare. Just after their panel, they sat down with FATIMA MOOSA to chat all things animation.

Being at Comic Con

KN: I am so very excited. There’s so many opportunities, especially like coming back from home. I’m not going to raz on my own country, but it’s kind of smaller and not a lot of stuff happening there. But this is a colossal event. It’s just blows our mind. It’s really great to be in a place where you see your art or your craft going to the next level, especially when you’re coming from a place where it’s not that appreciated. Even if we came here and got robbed it would be like but we’re here at Comic Con.

EN: Being in Comic Con is quite amazing. The experience is unbelievable. I never actually thought that to be actually a comic con, as big as you know, Comic Con New York coming down to Africa. So we usually have comic con in Zimbabwe. It’s quite small and the community is kind

of shy. The nerd community is small and shy, and quite conservative. People don’t even cosplay. Coming to Comic Con Africa I can expose who I am.

KN: I think our parents were okay with. I won’t say my mom encouraged us but she didn’t discourage us.  Especially back home, I don’t know how it is here in South Africa. But there’s always this talk that parents don’t want us drawing because there’s no money. I’m a pragmatic guy so I never saw a career out of it. But I knew I was good at art.

So I thought of architecture as I guess the closest thing to having a stable job. But then,

circumstances happened. And then my first job I was asked to be a graphic designer. The guy was really encouraging. Then I just started getting jobs in art, and never did that degree. Then it was Afro Tokyo with the comic books. And now we’re here.

EN: As a kid I’ve always liked cartoons. I grew up on cartoons. Even up to know like, I don’t watch movies that much, or series. It’s just like anime cartoons and comic books as well. My parents were like you keep watching these weird things and these things have no money. Now they see there’s a community and people that actually appreciate your stuff. I think there’s a mindset change once the checks come in.

KN: I would say more local characters. Like we got tokoloshes here. Sometimes when you go on safari and stuff like that, I want to see that sitting on a video game. It’s so different and refreshing. I don’t travel much. But when I do see it, I’m like why don’t they have those in video games. I want to see more of that stuff. I don’t want to force people to like my game. But then it’s like we’ve seen Hercules. We have our own Hercules somewhere.

EN: That’s an interesting question. African animation would be more like the stories that we want to tell more character representation and people of color. In the animation industry,you either see Americans or Japanese people. I want to see more people of my skin tone in animation, telling my stories in a fun way that everyone can appreciate.

KN: I don’t feel like you should box yourself like as an African, I have to do this, or that. But

Africa. I think we have faults in it and there’s a fault in the system. The system is reacting like

we don’t empower them and there’s the glass ceilings.

But there’s also a sense that there’s nothing stopping us from making cartoons in this day and age. I do get the glass ceiling. But if they don’t want you in you shouldn’t really look at them as the standard. If you don’t like the rules, break the rules.

EN: I think the problem is we as Africans don’t really put ort content out there. So the

people in America can just appropriate our stuff since they have more money. So I would give advice to say put yourself out there. I think Marvel created a character based off one of the Zimbabwean leaders as a spiritual witch doctor. They put it in Black Panther. So our community was a bit upset. Instead of becoming upset, we should create our own characters.

KN: Just try it out. I think most of what’s stopping us is a misconception. Maybe if you do

a little more research on it, and see the avenues that are going into that. Talk to your parents from a point of little bit of understanding, because like they just looking out for your future.

To get into the industry learn something about how to make money out of it, or what avenues are there so you can convince your parents. And the tech is there. There’s almost no excuse.If I knew then what I know now I would be working for Nintendo.

EN: I’d say if you’re really passionate about this thing, just have a passion to do it. Go online

and search for your favorite animators. We learned how to do all this through YouTube and stuff like that. So if you really want to do it, it’s all about the passion.

I keep telling people instead of spending your data on Whatsapp, spend it on finding out about the industry. Just do your research. So that you can be the next animator. The opportunities are there, and I think it’s an awesome career.