Home Government Ziyanda Stuurman asks: “Can we be safe?” and “how” in new book
WhatsApp
Facebook
Twitter
Email
Print 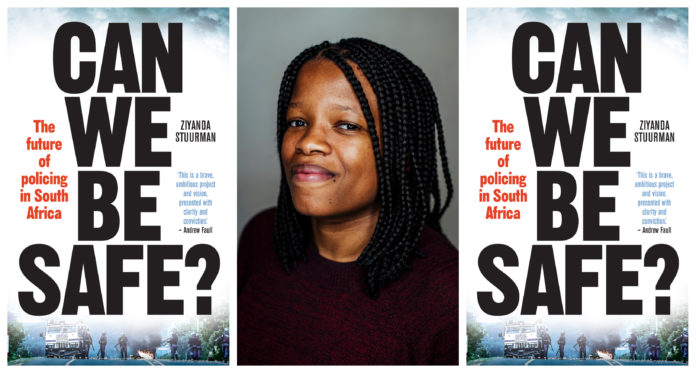 Stuurman has done extensive work around the issue of safety and security. All her academic work and policy research have culminated into this book. While academic writing is out of reach for the “person on the street”, Stuurman’s book aims to correct that. The book speaks to the many issues facing from an unequal criminal justice system, corrupt policing and historical injustices. She makes the argument that there needs to be a radical overhaul of the criminal justice system.

But how can that be achieved? Stuurman explains in the book and a conversation we had with her.

Following a conversation with her commissioning editor, Mbali Sikakana, Stuurman said they realised there was a gap in the South African literary space with regards to policing. The book was also borne out of the idea that the police service is the function of government which people come into contact with the most.

It has to do with the high rates of crime in South Africa. But Stuurman said, there are certain people like working class Black, Coloured and Indian people who come into contact with the police more often. Whether it’s at service delivery protests or labour strikes, these groups of people come into contact with a very hostile police response.

With that in mind, Stuurman said if she was speaking to a specific audience for the book, it would be middle-class South Africans. It is this group of people who need to understand that having a terrible police service is not just a problem for poor or working class people. “It’s an issue for all of us,” said Stuurman.

It’s this important fact that lent itself to a tough writing experience for Stuurman. She said that policing is often an incredibly complex issue to write about but policing in one of the most unequal societies in the world made it more difficult.

Stuurman said her book is an attempt to bridge the gap between theory and what people experience daily in South Africa. “There are a lot of misconceptions around policing in South Africa,” Stuurman said including ideas like if we had the correct police minister or if the police were correctly funded, the police would function well.

“I think people sometimes underestimate how deep the history of the police as a service and an institution runs and how much would have to change structurally in order for it to to be better and to serve us better,” said Stuurman.

It would be disingenuous for anyone looking at policing in South Africa to judge it purely on the actions of the past 15-20 years. What Stuurman shows in her book is how both colonial and apartheid policies and structures remain ingrained in the criminal justice system from police, the courts and beyond. The book shows how the racist and oppressive policies from apartheid and colonialism have continued into the democratic era of the country.

It’s for that reason that Stuurman advocates for an abolitionist stance when it comes to policing. Now people reading that might think this is a transplant from a Western, American context. Last year in particular during the #BlackLivesMatter protests in America following the murder of George Floyd by a white policeman, there were renewed calls for the abolition and defunding of police.

However, Stuurman explains what abolition means in a South African context. For Stuurman, it is based on ideals that were written about in the Freedom Charter in 1955. She said by looking at what the charter says, it shows those people reimagining society post-colonialism and apartheid didn’t see policing at the centre of it. Instead they were envisioning a caring society based on ideals of ubuntu.

ALL SHALL BE EQUAL BEFORE THE LAW!

No one shall be imprisoned, deported or restricted without a fair trial;

No one shall be condemned by the order of any government official;

The courts shall be representative of all the people;

Imprisonment shall be only for serious crimes against the people, and shall aim at re-education, not vengeance;

The police force and army shall be open to all on an equal basis and shall be the helpers and protectors of the people;

All laws which discriminate on grounds of race, colour or belief shall be repealed.

“I think we’ve gotten lost in South African society in this sort of punitive logic that we’ve arranged our society country around,” she said. Stuurman pointed out in the interview as she does in the book that generally people living in South Africa have a deep mistrust of each other.

“Personally, I don’t want to live in a society like that where we have this huge prison system and the enormous court system that works to jail people in a society that is so deeply unequal,” she said.

In South Africa, with many facing the triple challenges of inequality, poverty, and unemployment, Stuurman said the answer to these should be dismantling these systems – not building more prisons. As for one policy, Stuurman would be immediately put in place if she had the power: it would be to ensure police officers are held properly accountable for their actions. She believes while it won’t solve the problem, it would restore some faith in the police service.

As for why Stuurman thinks policing is such an important issue, she said it’s an issue that touches every single aspect of society from healthcare, schooling, and the economy. “I think understanding the crisis and the multiple sorts of failures of policing is a way to understand many other aspects of society and of government,” she said.

Finally, Stuurman said she wants to convey the message that while big changes need to happen, there are smaller changes that need to happen at a community level. It takes every single person working together to create a safer society for all. For example Stuurman points out that if a person joins a neighbourhood watch group or social media groups, they shouldn’t be using their position to victimise poor people or homeless people. That’s a personal choice and a difference someone can make.

“So they are big structural changes, but there’s also day-to-day changes that we could make that could and should change the way that we understand crime and violence, and safety in our country,” she said.

The book is available online and at all bookstores.