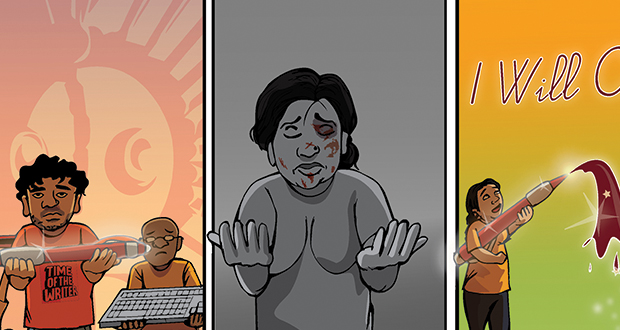 After reports emerged on Saturday alleging that Durban-basedÂ author ZP Dala was forcibly institutionalised, the author has herself released a statement clarifying that she has been admitted to hospital to be treated for post- traumatic stress disorder.

Dalaâ€™s statement, however, comes after a statement from the US chapter of PEN alleged she was under â€œpressure from members of Â Durbanâ€™s Muslim community to recant and repentâ€ for her statements expressing admiration for author Salman Rushdie.

We are deeply concerned for the well-being of novelist ZP Dala http://t.co/7pKvOT4q59@PENSouthAfrica

Following the statement from the US chapter of PEN, authors Salman Rushdie and Neil Gaiman were joined byÂ activists in South Africa, including Zackie Achmat, in a chorus of concern for Dala’s welfare.

The English chapter of PEN also released a statement, which quoted Dala as saying: â€œIâ€™ve beenâ€¦ drugged till I can barely walkâ€¦ and basically broken down into a submission where I will follow the straight path (if there is one). I feel that the far-reaching damage to my kids will be severe as they attend schools that are 90% Muslim. And I refuse to educate them with fire and brimstone stories about how they may go to heaven but their beloved grandmother will burn in hellfire. Thatâ€™s what they are teaching the kids now anyway. I have also been harangued to withdraw, dissect, explain and renounce my admiration of [Rushdieâ€™s] works. I could just as easily burn my Oscar Wilde collection because some homophobes came calling. I canâ€™t turn back now and pretend I never admired his writing. I would look like a fool.â€ Â  Â  According to Rushdie, Dala had contacted PEN repeatedly seeking assistance.Â

Twitter, understandably, reacted with great outrage at Dalaâ€™s predicament. InÂ the meanwhile, some people close to Dala sought to temper the fury with some reason.Â

.@laurenbeukes seems @PENamerican have gotten their facts mixed up. Just spoke to her. In hospital yes, but being treated for PTSD. @zpdala â€” Tess Sulaman (@tesssulaman) April 11, 2015

1/2 Out of concern 4 @zpdala i have said that she is not a mental patient. She is recieving treatment for trauma by her doctors @ hospital. â€” Lubna Nadvi | Durban (@LubnaNadvi) April 11, 2015

2/2 Further clarification on her condition must come directly from her and her family.

These supporters of Dala questioned the report in the PEN statement.

before everyone rushes to assume @zpdala has been committed as some nefarious plot, can we wait & get facts? @SalmanRushdie@neilhimself

Whatâ€™s more, the South African legal system does indeed have safeguards in place. According to Dr Nabila Goga, writing on Facbeook, â€œThe Mental health care act only allows involuntary admissions if an individual is a threat to themselves or others. It requires a 72-hour observation period before admission to a mental institute (which have to be public institutions) and a number of forms to be filled.â€

@khadijapatel and admitted without consent as long as person requesting admission signs the appropriate forms. @brodiegal

@khadijapatel They are then to be observed for 72hrs by a trained professional at that facility after which the decision… @brodiegal â€” Karen Milford (@karenmilford) April 12, 2015

@khadijapatel However theses facilities are are all state facilities: you can’t be involuntarily admitted to private. @brodiegal

Â It was, however, not until Sunday morning that Dala clarified her position in a series of tweets.

Â  T1: I am admitted to St.Joseph’s Psychiatric Wing it was diagnosed that I have PTSD. No, I was not dragged kicking and screaming here â€” ZP Dala (@zpdala) April 12, 2015

T2: I spoke to a religious leader as I was in turmoil and his views were that I be admitted here so I can reflect on my religion and imaan â€” ZP Dala (@zpdala) April 12, 2015

T3: I then reluctantly came in for admission and soon realised I won’t be left alone as a staff member recognised me and the news spread â€” ZP Dala (@zpdala) April 12, 2015

T5: Due to very strong meds and the people pointing and whispering I told the nurses to call my doctor and discharge me â€” ZP Dala (@zpdala) April 12, 2015

T6: I felt that I would be safer at home, especially with the journo’s etc calling non-stop. But my doctor was gone on leave and â€” ZP Dala (@zpdala) April 12, 2015

T7: it was understood that his locum ( a qulaified psychiatrist) herself could not authorise a discharge. She placed me on further meds â€” ZP Dala (@zpdala) April 12, 2015

T8 Hence I am here at St. Josephs and cannot be sent home until the doctor comes back. The wait, the reporters as well as the other patients â€” ZP Dala (@zpdala) April 12, 2015

T10 After being harrassed by a journo about “The Satanic Verses” I admitted it befuddled me.He reported that I expressed admiration for it! â€” ZP Dala (@zpdala) April 12, 2015

Activist Zackie Achmat has apologised for treating the PEN statement as fact. He added, however: â€œI still condemn those in Durban and elsewhere who use Islam for reactionary politics. And, I still believe Muslim institutions must be challenged.â€

Dear FriendsPlease see the message from Lubna Nadvi. My apologies to Zainub Dala for accepting the statement of PEN as… Posted by Zackie Achmat on Saturday, 11 April 2015

@dbbovey Mental health and the processes around it are so easy to abuse. We can only hope the psychiatrist is not allowing abuse. â€” Karen Milford (@karenmilford) April 12, 2015