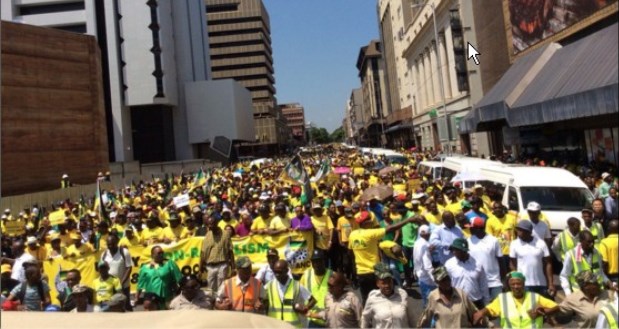 For ordinary poor South Africans preoccupied with making it through another day, the Zuma-Gupta scandal is just another one and means nothing, says GOPOLANG BOTLHOKWANE.

On one of the good days in this beautiful land that we call South Africa (some call it Azania) we woke up to the leader of our land, Jacob Zuma, uttering a couple of words which prove to us yet again that in another lifetime, he could have easily been a linguist expert. The words are clever Africans, or to be more specific, â€œclever blacksâ€.

By definition, according to Zuma, a â€œclever blackâ€ is someone who is eloquent in criticising Â themselves about their Â own traditions. It sounds funny, but he was not joking. He was talking Â about middle-class South Africaâ€™s non-stop complaining about all that is wrong with our country. And,Â of course, the presidentâ€™s words ignited a fire amongst middle-class South Africans who felt that the president was belittling excellence and hard work.

Political scandals are as frequent and hot in South Africa as the presidentâ€™s words, and last week, the deputy finance minister Mcebisi Jonas set off the most explosive political scandal to date. On Wednesday, he released a statement saying that the Gupta family offered him the job of finance minister last year. As expected, there was an outpouring of anger and outrage towards those implicated in the scandal, and both social media and mainstream media flooded with speculation and suspicion. The crisis of the president and the government is ultimately the crisis of the ruling party, the African National Congress (ANC).

With every scandal or crisis that the African National Congress has found itself in or going through – from former president Thabo Mbekiâ€™s handling of HIV/AIDS epidemic, to current president Jacob Zumaâ€™s corruption charges – there has always been a prediction that due to the nature of the scandal at the time, the ANC will go on to perform badly (if not completely lose) in the elections that followed after those scandals. But defying expectations and popular sentiment that has come with every scandal, the ANC has gone on to perform just as well as it always has.

What has followed Mcebisi Jonasâ€™s bombshell is no different to what has followed previous scandals. With local elections coming soon, thereâ€™s once again talk of the ANC losing support and the majority it enjoys in many of the municipalities it leads. Political analysts are on TV predicting the great loss that will come with Jonasâ€™s revelations, lengthy articles are written explaining why this might be the final straw for the ruling party, Â and social media is abuzz with trending topics about the great unravelling of the ANC.

And for the majority black and poor, the impact of these political scandals is felt the most. They affect the little they survive on. Come election time, it is their majority that decides the balance of power, but in the conversation and debates about these scandals and what they mean for the country, it is middle-class South Africa that has the last say. As with previous scandals, the debates and conversations about what Jonasâ€™s revelations mean for our country are taking place away from the ordinary poor South Africans. They are taking place on pay-TV news, talk radio stations, social media and other online platforms – spaces usually inaccessible to majority of poor South Africans.

Will this finally be the scandal that humbles the beast?

But the failure to pay attention to the majority black and poor South Africans, who by their large numbers have the real power and are the most affected by lack of accountability from elected officials and the failure to amplify their voices, simply means political scandals where elected official are caught with their pants down or hands in the cookie jar will remain just entertainment. Until ordinary South Africans are part of the debate and conversation, we are going to read political scandal after another for nothing but entertainment. Â

Gopolang Botlhokwane once in a while runs with a camera and a notebook trying to capture the lives of ordinary South Africans for The Daily Vox.