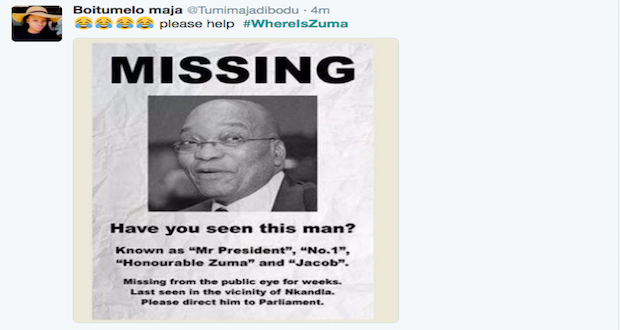 While all and sundry have passed comments about the performance (or lack thereof) of the ANC in some of the most contested parts of the country, President Jacob Zuma still hasn’t uttered a word.

And everyone, and we mean everyone is looking for him. Pundits agree that he is mostly to blame for the ANC’s performance at the polls – which is both fair and unfair – given that the ANC is rotten to the core these days and Zuma is just one character in a list of problematic protagonists leading the party. Harsh?

Either way, after he was spotted in a line in Nkandla, he hasn’t been seen since. And the internet is worried.

“@tend_zoR: I was asking #WhereIsZuma & He replies He went to meet Jesus at OR Tambo int airport, Jesus is Coming” pic.twitter.com/W9eU23G6Gh

I really don’t know #WhereIsZuma His even missing from my Shirt …His MIA pic.twitter.com/Nw6QACe9BT

#WhereIsZuma? he was last seen running at 150km/h to OR Tambo airport To welcome Jesus Christ to South Africa. #RSA pic.twitter.com/WryPwVb9Gd

Jokes aside fam, he is the face of the party. Even at these local elections, the ANC used his face to try and convince the electorate to come forward and vote for the party. So he needs to speak up, and let us know he is alive and well. Now is not the time to hide away, Msholozi!