Home Government Where to for Zuma’s critics now that the marches are over?
WhatsApp
Facebook
Twitter
Email
Print 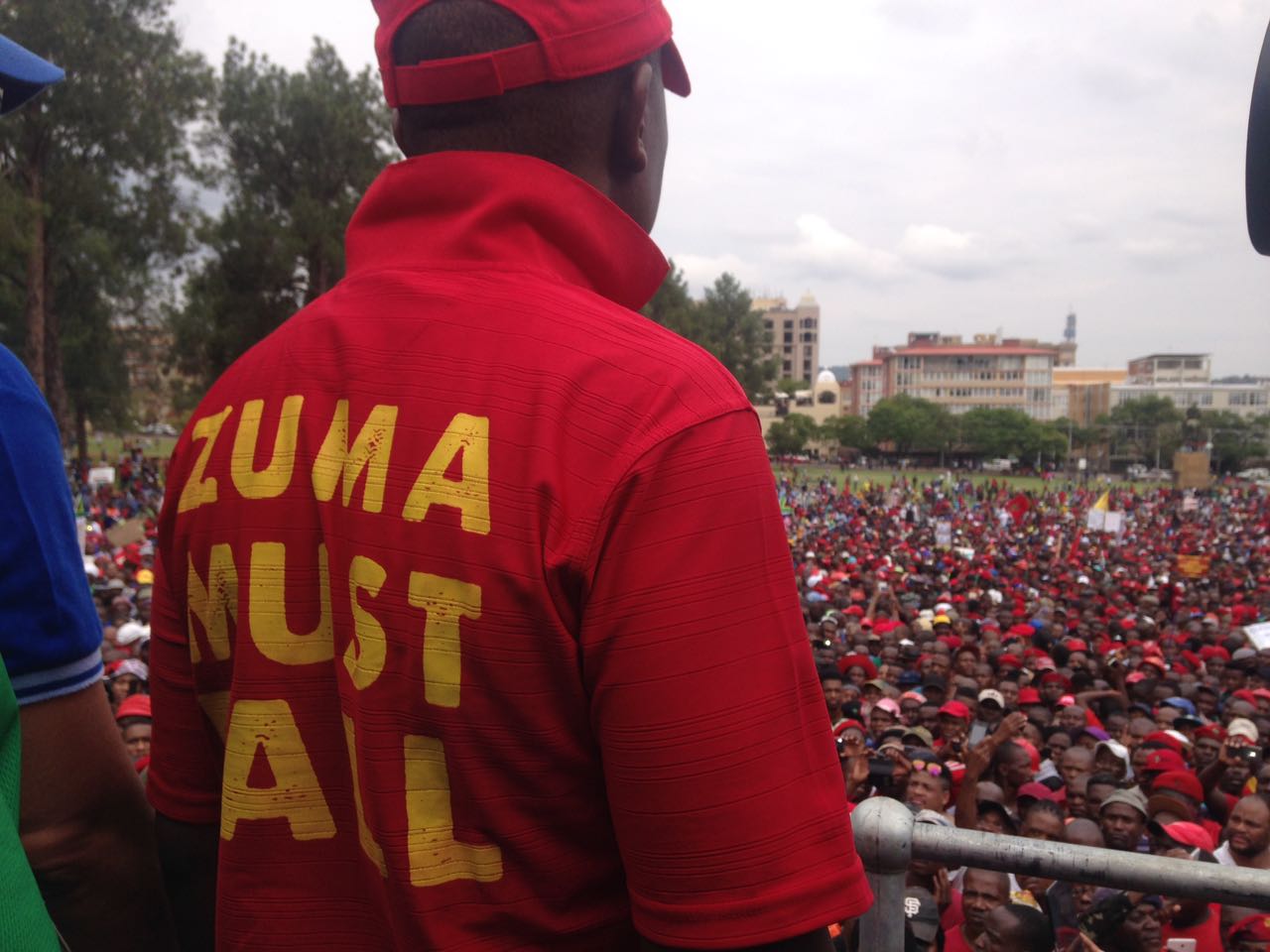 Speaking to the huge #OppositionMarch assembled in front of the Union Buildings on Wednesday, the Economic Freedom Fighters’ Commander-In-Chief Julius Malema said that the march is not a once-off event but a part of rolling mass action.

â€œThis is not just a useless exercise. You came out in your numbers, you have sent a strong message. We want these numbers again when we debate a motion of no confidence in Parliament in Cape Town. Our people must come out in their numbers to say â€˜Enough is enoughâ€™.

He encouraged those assembled there to go back into their communities and mobilise their friends and family, in their own way.

The Daily Vox team asked marchers how they plan to take the campaign to remove Zuma forward. Humans Chirind, 21, student, Limpopo
I think weâ€™ll hear from the motion of no confidence in Parliament about mobilising each and every town and city. I think we should mobilise so that the message is sent clearly to the president himself. About the protest, I think it was disciplined and successful and progressive. There were more EFF people than the other parties, out of all other parties combined. Kepile Mothokwa, 48, DA councillor, Bela Bela
We are going to mobilise people around our towns, and we are going to continue with this mass protest. If our president calls us, you see itâ€™s the unity of different organisations, if our president come and combine and mobilise us, come and act on behalf of South African people, we will do that.

Iâ€™m from Bela Bela in Limpopo, we already started, weâ€™ve got different organisations, which we call two members to represent in terms of the meetings that we are holding, in terms of the planning, in terms of the mobilisation. So that will be big protests that we are going to continue with every week. All the opposition parties that are in parliament, they are the same organisations, including the NGOs and some of the church members, they joined us. We have one on the 26th, the coming month, a big [protest]. Iâ€™m expecting a lot [of people]. We asked each organisation to bring 50, we are more than ten organisations; thatâ€™s why I say Iâ€™m expecting a lot. Mosoane Kgamomatsha, teacher, Mamelodi
The people of South Africa are fed up. They want to do something. Theyâ€™re no longer happy with their government of the ANC under the leadership of Zuma, especially the corruption in our country. And looking now at the downgrades that are happening, the people are fed up. I think he is stubborn. I do not think he will relinquish powers with these marches, but we need to push. If people can push, then maybe at the Luthuli House they will hear something. But we know those chameleons there, how they are going to react. I think the march was a success today.

People need to mobilise in order to voice out their anger, so that maybe the people will listen. And it is only the people that can change the disappointment, they can see what they can do with their disappointment because looking at what is happening here, people are not happy. Only the few of the ANC leadership are happy, but the country now is in tatters.

Reporting and images by Rumana Akoob, Mihlali Ntsabo, Nolwandle Zondi. Voxes have been edited for brevity and clarity.