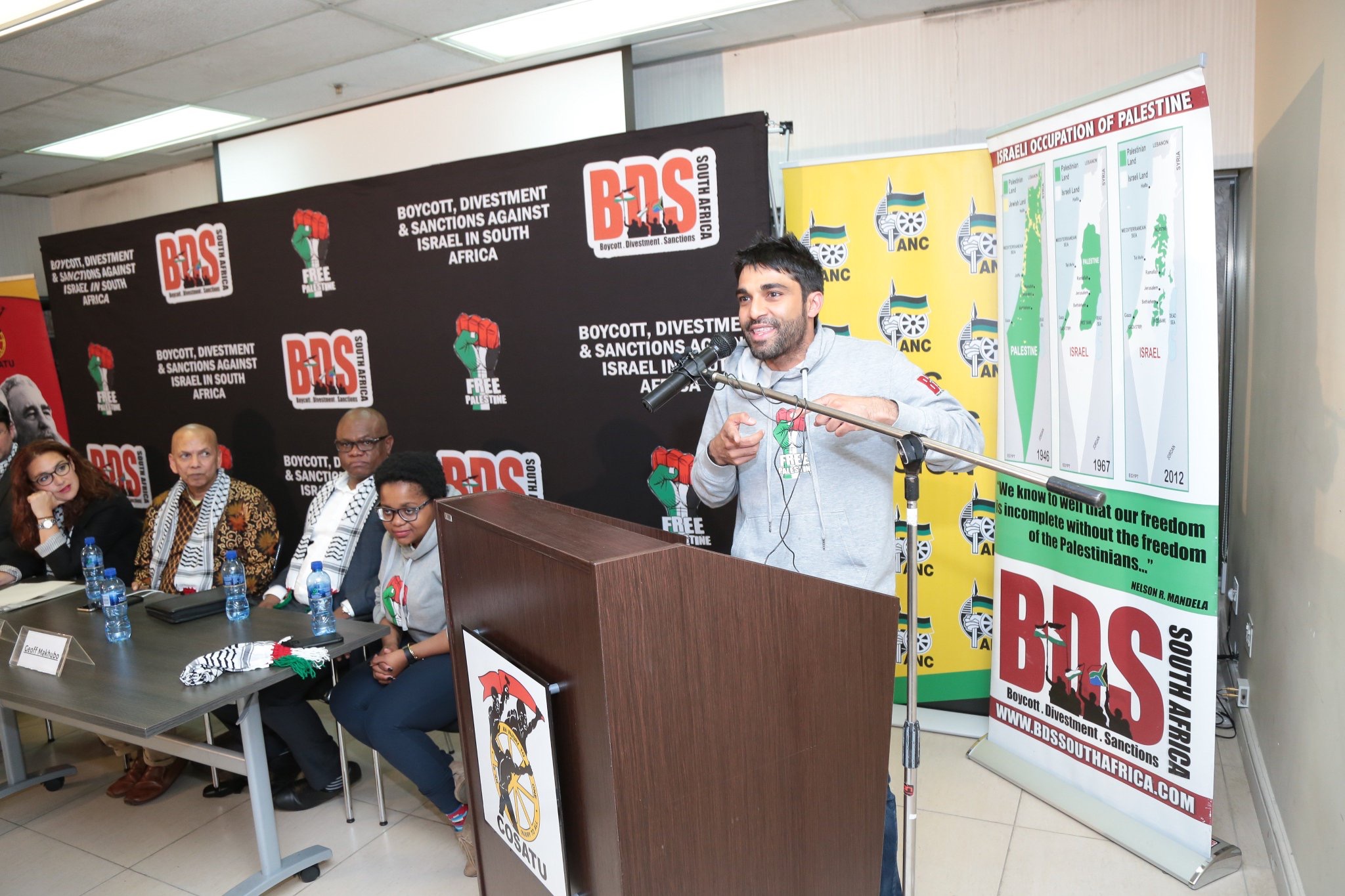 Boycott Divestment and Sanctions South Africa (BDS-SA) co-founder and director Muhammed Desai has been cleared of sexual harassment accusations. An independent investigation into Desai found the allegations of sexual harassment levelled against him “cannot be sustained” and are “unfounded”. By SHAAZIA EBRAHIM and FATIMA MOOSA.

The board of the Palestinian rights lobby group appointed advocate Smanga Sethene of the Johannesburg Bar to investigate the allegations. The investigation process is said to have begun on April 15. The report was released on May 24.

The Daily Vox first reported that US academic Sang Hea Kil and two others had laid a charge against Desai on March 26. Sexual harassment allegations against Desai surfaced following a night out in Melville on March 21 when three women, including Kil, claimed he had sexually harassed them.

Report: “There is no rational basis… to take any disciplinary action against Mr Desai”

In a 34-page report, the investigation concluded that: “… there is no rational basis in law to take any disciplinary action against Mr Desai. The allegations against Mr Desai premised on all the statements of the complainants, their witness and Mr Jeenah’s interview cannot be sustained and are unfounded.”

The complainants were in Johannesburg to attend a conference on Palestine and then stayed on for an Amec-hosted study tour of Johannesburg. It is during this period they allege Desai sexually harassed them. Amec initially called a meeting where the three complainants confronted Desai, and two other members of the BDS-SA board with their allegations on March 23.

In the report, the investigator alleges that Kil was being flirtatious with Desai during the interaction at the restaurant. Sethane questioned why Kil did not report the alleged sexual harassment to the police or to the restuarant staff.

During the initial interview with The Daily Vox, Kil confirmed she reported the alleged sexual harassment to the police two days after the events. The police later dropped the case saying “touching” is not considered an offence and that the police could not proceed with the case.

“In the circumstances, the said allegations of sexual harassment against Mr Desai by the three complainants cannot be sustained given the apparent contradictions in their statements and that of their witness,” said the investigator as to the reason why he cleared Desai.

The investigator chastised BDS-SA for their delay in attending to these serious allegations.

“With the passage of time and if the allegations are not dealt with expeditiously, the victim, the alleged perpetrator and the organisation itself, are put in a state of suspended animation until a due process is finalised. This should never happen,” Sethene said in the report.

The report ordered that BDS-SA must publish the report on the website and email it to the complainants, and Amec without delay.

The Women’s Legal Centre (WLC) has been representing Kil in the case. Following the release of the report, the WLC released a statement on the outcome of their client’s complaints of sexual harassment against Desai.

In interviews with The Daily Vox, and in their press release, the WLC said throughout April and until May 16, they have been seeking clarity on the terms of reference for the investigation. BDS-SA did not respond to or acknowledge any of their concerns.

The Daily Vox was also unsuccessful in attempts to gain a response regarding the investigation.

The complainant was advised that the investigation was taking place urgently, and was asked to confirm the content of her statements. But no new or further questions were posed to her and she was not given the option of interview.

The Centre says they are disappointed in the legal findings and analysis of the investigation. “It shows a clear bias in favour of the perpetrator, and the investigator places the burden and onus on women to address sexual harassment and sternly resist it,” the WLC said.

These types of analysis, WLC said, are “extremely harmful to victims of sexual harassment, and present a bias in favour of male perpetrators”. For the WLC, this investigation and its report highlights the importance of taking a “victim-centred approach” to dealing with sexual harassment.

The report’s approach “heavily criticised” and “questioned” the motives and behaviour of the complainant “against the standard of the ‘perfect victim’, implying and creating a narrative in many instances that the victims are over-reacting, or seeking attention”, the WLC said. This has damaging effects for the victim who sought justice, and failed.

“The report deliberately ignores the deeply entrenched and gendered power relations that exist between men and women in the workplace, as well as work-related social spaces, but ironically utilises an approach that is wholly indicative thereof,” the statement reads.

It also ignores the case law on how sexual harassment frequently takes place in work-related social spaces, outside of the office.

Moving forward, the WLC said they will continue to assist their client as she considers her options: “We pledge solidarity with all the victims of sexual harassment at BDS South Africa, and in the public sector, those who have come forward, and those who have not.”

Desai speaks to the media on the Joanne Joseph Interview

Speaking on the Joanne Joseph Show on Radio 702 on May 27, Desai said he left relieved that he was cleared by both the South African criminal justice system, and the independent investigation.

“I don’t think this is an issue of winning and losing … In some ways the South African criminal justice has cleared, and an independent investigation has cleared so it’s unfortunate you still have people like Na’eem Jeenah going around suggesting that this issue is not over,” he said.

“We are very disappointed that Muhammed Desai has chosen – despite his promises to us to come onto the programme – not to do that. That leaves us with no choice but to simply speak to someone else involved in this case.”

When questioned by Joseph about whether he had been cleared by the South African criminal justice system of harassment, Desai replied: “I have indicated this several times, and I am feeling annoyed that even though I have confirmed that the South African police service has indicated me to that case was dismissed against me as a false case … I don’t know where you are going with this.”

Kil says the investigation is “unacceptable”

In a comment on Facebook, Kil responded to the report saying the investigation is “unacceptable”. “I am frankly alarmed and deeply offended at the language and outcome of BDS-SA’s ‘investigation’ into my and other women’s claims of sexual harassment by BDS-SA director Desai,” said Kil.

Kil said there is an obvious bias displayed by the advocate who conducted the investigation. She says the investigator only interviewed Desai adding “but not the women involved including myself and this reflects a lack of sensitivity to gendered and sexualised violence.”

She said the report is riddled with “sexist constructions and understandings”.

It “permits men to follow, harass, and touch women with impunity, even WHEN THEY REBUKE THEM, and puts the burden on all women to know the fine details of sexual harassment law in South Africa in order to protect themselves or find justice under the law,” Kil said. (Capital letters used to reflect Kil’s statement accurately)