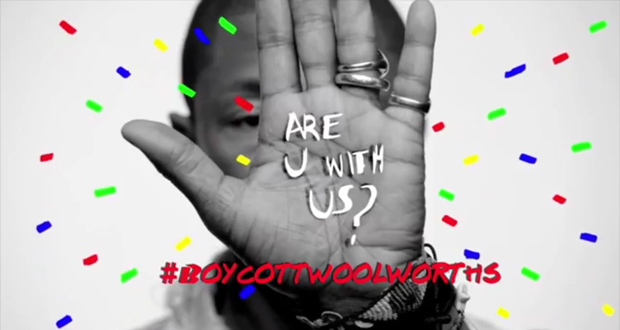 Earlier this year, Woolworths teamed up with USÂ musician Pharell Williams in a campaign called â€œAre You With Us? #PharellWithWooliesâ€, which aimed to â€œcall together everyone around the world who believes that a better tomorrow is possible when we all do our partâ€. ButÂ BDS South Africa has a whole new take on the campaign – literally a whole, new take. FIRDAUS KHAN explains.

Early on Saturday morning, Boycott Divestment Sanctions South Africa (BDS-SA) â€“ which started its Boycott Woolies campaign in July last yearÂ to to protest that the store stocks Israeli products â€“ released a spoof of the video, with a new message supporting their cause dubbed over the video PharellÂ did for Woolworths.

It featuresÂ aÂ clearÂ disclaimer saying thatÂ â€œthis spoof video does not represent the views and/or opinions of Woolworths, or Pharrell Williams, and should not be attributed to themâ€ so it’s probably safe from claims of copyright infringement.

The video, whichÂ has been described as “culture jamming“, went viral with the campaign attracting the attention of well-known South Africans.

Check out this BDS spoof of Pharrell explaining why to #BoycottWoolworths. How real is this? http://t.co/ZCYcEfy79q

And it’sÂ drawn its share of supporters and detractors online.

@BDSsouthafrica Always disgusted when I have 2 go pass by Woolworths stores n will always be until Palestines are freed #boycottWoolworths â€” Owen mncwango (@Owenmncwango) June 28, 2015

Been asked to #boycott @WOOLWORTHS_SA lol I love #woollies coffee and I’m #Jewish why should I #boycottwoolies, it makes no sense to me.

Boycott Woolworths? No thanks.

What do you make of BDS’s latest salvo in the #BoycottWoolies campaign? Tell us in the comments section.

– Featured image: Screenshot from the video.