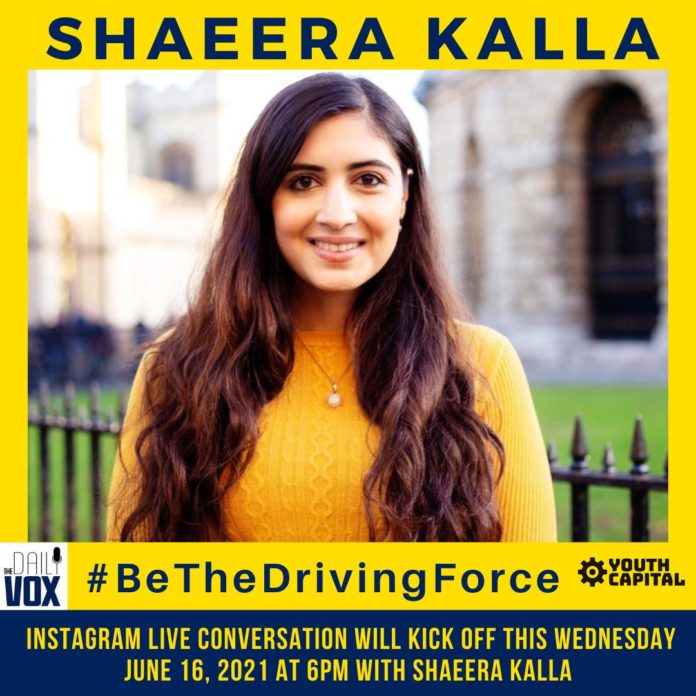 Youth Day has now officially passed but that certainly does not mean issues concerning young people are a thing of the past. Instead, there should be a greater focus on young people and the issues they are facing. That’s why the #BeTheDrivingForce series with Youth Capital and The Daily Vox is only just getting started. We have plenty more conversations coming up and the special surprise to end off the series.

To mark June 16, the series had a double feature. In the morning, we hosted a Facebook Live with a focus on the upcoming municipal elections. We were joined by Pearl Pillay from Youth Lab, Zaakir Jordan from MyVoteCounts and Jordan Magrobi from Quote This Women +.

Check out the full conversation here:

Then we had our regular weekly Instagram live at 18:00 with Shaeera Kalla from the #PayTheGrants campaign.

Shaeera Kalla studied a Bachelor of Commerce in Philosophy, Politics and Economics (PPE) at the University of the Witwatersrand and has an honours in Political Science. She is the former President of the Wits Student Representative Council (Wits SRC), and one of the many students at the forefront of the #FeesMustFall protests in 2015/16. Shaeera is the co-founder of The Mbegu Platform. She was recognised in 2016 as one of the Top 200 Young South Africans by the Mail & Guardian, and she holds a Master’s degree in African Studies from Oxford University. She is currently working for the #PayTheGrants campaign.

When asked about digital activism, Shaeera reflected on the fact that it’s a way to connect, educate and engage and that is where its value comes from, but we also need to think about how we can create spaces outside of social media. “I think there is a gap in understanding what the youth are thinking in general so there’s any interesting way social media can be leveraged for that. Today I saw there is a new platform which allows us to use a digital tool to explore and visualise with youth-centered data. It’s called Youth Explorer. […] It’s interesting because it allows you to see what is happening in different provinces and how to connect and engage and ensure you are covering all your bases,  said Kalla, commenting on how to use digital activism in a way that ensures that the issue is more long-term.

“We need to not see the push for jobs in competition with basic support that everyone deserves. I think this internalised feeling that we are failures because we can’t find jobs in a system where there just aren’t enough jobs for everyone is something that we have to work hard to undo. That’s the power of ideology. People have been made to feel that it is their personal failures. […] By pushing for a basic income, we aren’t saying this is a silver bullet. But at the very least it’s a way to undo the damaging ideology that has gotten us into this mess. We have millions in South Africa and billions across the world who are poor for no reason other than they are being historically looted,” said Kalla, speaking to the importance of the basic income grant.

Make sure to keep an eye out on our social media for the announcement of our next speakers. It’s going to be an exciting one.

The #BeTheDrivingForce series includes a WhatsApp group, where young people can pose questions that will be answered in Instagram Lives, every Wednesday from 6 to 7pm for the duration of the series. Join the Whatsapp group here: #BeTheDrivingForce whatsapp group There will also be a special pop-up newsletter for the duration of the campaign. Sign up for the newsletter here.