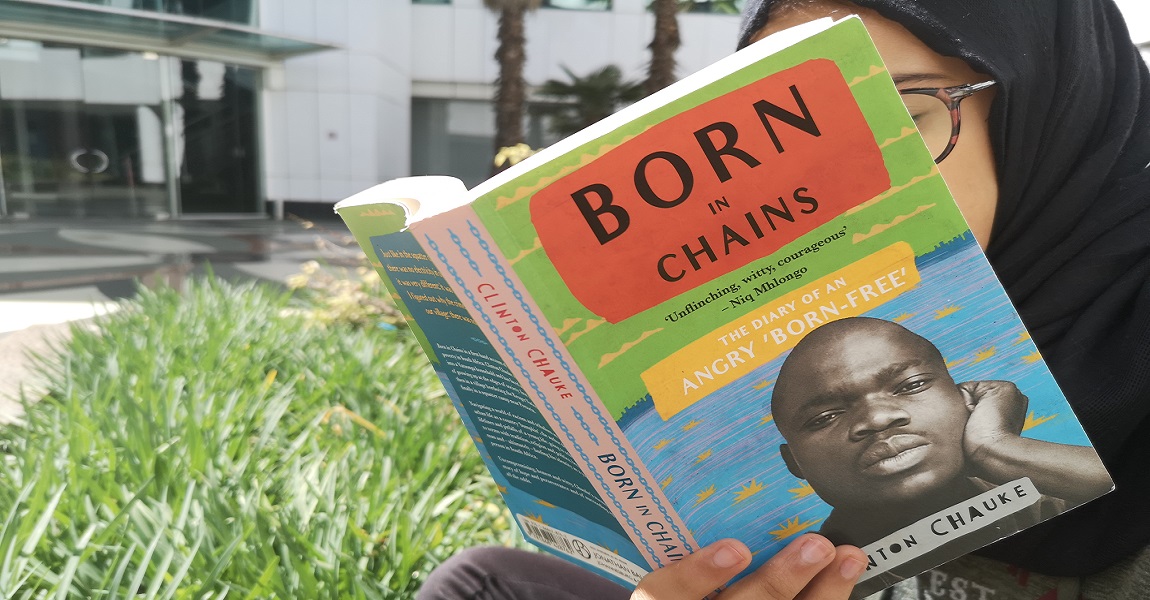 “Growing up as a born free I was told there were a lot of things I could access – education, shelter, even food, sometimes. But I found them hard to attain,” writes Clinton Chauke in his debut book Born In Chains: The Diary Of An Angry “Born Free”.

Author Clinton Chauke: â€œWhat A Wonderful Time To Be Young, Black And Talentedâ€

In the book, Chauke grapples with what it’s like growing up young, black and poor in post-apartheid South Africa. He writes South African poverty in it’s grimy splendour from the perspective of someone who was born supposedly free, in 1994.

In a diary-style memoir, Chauke details his life growing up in rural Limpopo, then in a small village called Bevhula near the Kruger National Park and then in the squatter camps of Atteridgeville in Pretoria.

In Bevhula, he lived in a house that was built by his mother and father with mud bricks and a thatched roof. The family lived off eating grass and insects because they were so poor.

Chauke lived near crocodiles, elephants and lions, monkeys and snakes. He thought it was normal to live in close proximity to wild animals. Chauke relates an anecdote about how the Kruger Park forbid people from killing lions who were attacking people’s livestock. He said this made him think that animals were better treated than people in this country.

When a tragedy stole his family home in rural Bevhula, Chauke and his siblings moved to a shack in squatter camp near Atteridgeville.

In his book, he writes about how poverty placed a burden on the relationship between his parents. His father dabbled with alcohol and was in and out of blue collar jobs whereas his mother consistently worked many jobs to sustain her family. Writing about his mother, Chauke has nothing but admiration. It’s an interesting look at the role of mothers in South Africa who carry their families on the back of hard-earned work. When Chauke writes about his father, he writes with empathy. He appreciates that his father still stuck around, unlike the fathers of many he knew. It’s not easy to be a black man in this country, Chauke writes.

In an earlier interview with The Daily Vox, Chauke said he is not trying to romanticise the conditions he grew up in. “In my book, I’m trying to say that poverty is real no matter how much the government or anyone who is optimistic would like to say we’ve moved forward. The inequality is there. The poverty is still there. Even the system of discrimination is still there. We need to talk about these things and then maybe we can find a way of solving them,” he said. Even with political freedom, the discrimination and erosion of self-worth of apartheid is still evident. Chauke also writes about colourism in the black community. He speaks about how darker skin is considered ugly, and the aspiration to whiteness that his community falls prey to. There is also the stigma he faced being Vatsonga in an area where most people were Pedi or Tswana – and the tribalism and xenophobia that exists within townships.

Chauke’s story is not extraordinary. Instead, it is telling of what a majority of South Africans face daily. “I wanted to share the story of growing up as a black folk in South Africa. It’s the story that’s common but never shared. I aimed to find identity for myself, but I also tried to open that room for other young people as well who could see themselves in my story. I’m telling my story but at the same time I’m telling their story of life as a South African. It’s my story but itâ€™s also their story,” Chauke said.

It’s true that Chauke is young, he hasn’t lived much. As a born free, he is just 24 years old. But the weight of his experiences matured him. Chauke makes keen observations about politics and poverty in South Africa. He is honest and witty in his accounts of his lived experiences. Chauke debates the narratives of political freedom but, through the lens of a born-free, shows why we need economic freedom.

Poverty is chains. We cannot speak of being born free because free would mean that there is nothing holding black people back from. At the same time, in South Africa poverty has a race. This is from a colonial history and then a system of apartheid. Poverty is an obstacle that many black South Africans endure. It’s telling of the amount of protests that take place all through the country.

Born in Chains is a refreshing and necessary read. However, Chauke’s story of hard work and hope prevailing and divesting him of poverty is an exception. He has fought many obstacles to get to the place he is. Many don’t have that luxury.