Home Online Chatter #CommitYourSelfie: What would you do with the Nkandla money?
WhatsApp
Facebook
Twitter
Email
Print 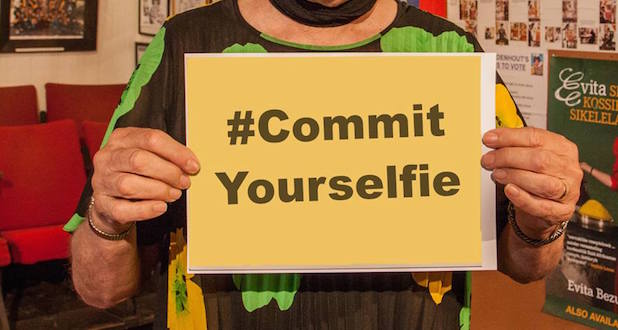 Evita Bezuidenhout, South Africaâ€™s self-proclaimed â€œmost famous white womanâ€, has launched a campaign to get President Jacob Zuma to do what many South Africans are waiting for: pay back the money. While the Economic Freedom Fighters and the Democratic Alliance (DA) are leading a political fight demanding Zuma repay taxpayers for funds spent on his renovated Nkandla homestead, Bezuidenhout has described her campaign, called #CommitYourSelfie, as a â€œpublic voice against corruption and pessimism, be it in government, management, or the corporate world.â€Â  Right now, the campaign is centred on President Zuma and the allegations against him following the Nkandla controversy. #CommitYourSelfie asks South Africans what they think should be done with the money, encouraging discussion around how the money can be used for social change. â€œ#PayBackTheMoney so that health, welfare, education, children, homes, hospitals, schools â€¦ and hundreds of other pillars of our society can benefit for all in a better future for all. Let the people lead and maybe the government will follow,â€ Bezuidenhout said in a press statement.Â

To join the movement, South Africans are asked to write down what they would do with the money, add the hashtag #CommitYourSelfie, and tweet a photo of themselves with their poster to Bezuidenhoutâ€™s Twitter profile, @TannieEvita.

The deadline for submissions is the 28 January. From there, the images will be put together in a multimedia display that will be released in the run-up to the opening of Parliament on 12 February, whereÂ  Zuma will present his state of the nation address.

So far, the campaign has drawn many supporters. Even DA leader Helen Zille decided to join in.

And what would Bezuidenhout do with the money?

â€œIf these monies illegally and corruptly taken be returned so that the wheels of our democratic society can once again be properly oiled, we could all expect a better delivery of services to the people,â€ Bezuidenhout said.

The EFF started the #paybackthemoney slogan during a parliamentary question sessionÂ with President Zuma in August 2014. The president walked out of Parliament and has not returned since. Meanwhile, Zuma has said he has always been willing to answer questions from MPs, but Parliament is an institution and not a place to shout slogans.