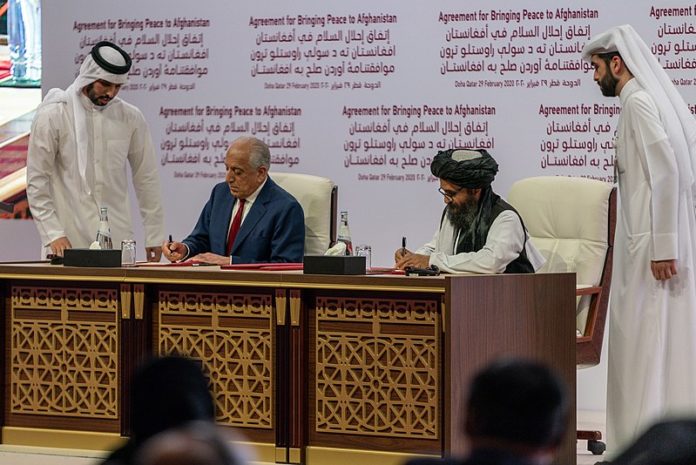 The United States and the Taliban signed a historic peace agreement in Doha on Feb 29, 2020. The deal calls for complete withdrawal of foreign troops within 14 months and a pledge from Taliban of not providing safe havens for international terrorist networks, and a clause for talks between the Taliban and the afghan government. The agreement has been met with official optimism in the United States. However, circles in New Delhi have seen the deal with greater skepticism owing to the greater political role of Taliban and the fragility of intra-afghan deal.

With the U.S. troop withdrawal in sight, Afghanistan’s future looks highly uncertain. It becomes essential for New Delhi to reflect on emerging security situation post Doha agreement. In the geo-political scenario, Afghanistan occupies vital position and therefore remains crucial in the strategic affairs of New Delhi. The land served as a gateway to India via ancient silk route, which carried trade from Central Asia to China. Historically, India and Afghanistan have shared close political and cultural ties. Mauryans, Kushans, Guptas, Mughals had to secure Afghanistan in order to protect India from invaders. Except Europeans, all other threats India faced came through Hindukush. A safe and secure Afghanistan is therefore critical for India to reach out to energy rich central Asian republics and act as a counterbalance to China and Pakistan.

Afghanistan’s political stability remains fundamental interest for New Delhi. For New Delhi, U.S. withdrawal from Afghanistan should have ensured a responsible government to take power in Kabul. It seems that the Trump administration wanted a mere exit from Afghanistan that would help it in coming to power for a second term. However, this decision has serious implications for the political stability of Afghanistan and the larger regional dynamics. The political uncertainty that the deal has brought for Afghanistan has created a power vacuum that could de-stabilize the entire region. Not only this, the chaotic situation could stoke Islamic fundamentalism making the entire region to go into the clutches of religiously inspired violence.

Islamabad has maintained cordial relationship with Taliban regime. Pakistan was the first country to diplomatically support the Taliban regime in Afghanistan from 1996 to 2001. The Taliban government is viewed ethnically close to Pakistan and therefore it enables them a kind of political leverage popularly referred as ‘strategic depth’. As the Taliban government is viewed ethnically close to Pakistan, therefore the Pakistan leadership feels secure from this frontier. Though New Delhi did not openly criticize the deal, it would never wish a pro-Pakistani or the Taliban government controlling the Kabul. The Doha peace deal certainly gives increased political and military role for the Taliban. Therefore, the expansion of territorial control by Taliban will be seen as a greater concern by New Delhi. The deal totally excluded the afghan government has practically called into question the legitimacy of the government it backs and provided validation to the Taliban that was earlier considered as a terrorist organization. It has also increased the possibility of the acceptance of Taliban regime by the international community in comparison to that of 1990s.

What has India to lose?

In the wake of Doha peace deal, the security experts in India have expressed deep concern for India’s domestic and national security. Traditionally, Kabul and New Delhi shared friendly relations. To increase its clout, New Delhi did not recognize the Taliban regime instead it chose to cultivate relations with Northern Alliance, which had limited control over the territory of Afghanistan. India also became the largest provider of humanitarian and financial assistance to the present-day Afghanistan establishing its firm credible soft power diplomacy. The fact that Pakistan was well taken on board to reach an agreement has put the entire goodwill work of India into question. The deal has certainly changed the dynamics of geo-politics providing greater leverage to Islamabad and there is no denying to see these developments in the realist paradigm. India thus stands to gain nothing except the harsh reality that it has jeopardized the strategic interests in its neighborhood. A conceivable future Taliban regime can have serious implications for India’s domestic security.

The recent situation in Kashmir is also not encouraging for India. Since BJP has come to power, it has followed muscular policy with hardly any scope for political engagement with separatist groups. Last august, New Delhi unilaterally revoked art-370 which provides special status to Kashmir and converted the erstwhile state into two union territories. Under the Indian constitution, union territories are directly controlled by the central government. The Valley was kept under strictest curfew along with mobile and internet services suspended for months. The abrogation of article-370 around which much of the Kashmir politics revolved has certainly made mainstream politics irrelevant Moreover, the reading down of Art. 370 has strengthened the fear among Kashmiris that New Delhi is hell bent on changing the demography of Valley.

As the world is battling to deal with COVID-19 pandemic, New Delhi on April 1 passed a new law in Kashmir that would provide permanent residency rights for anyone who has resided in the Indian administered Kashmir for a period of 15 years. The introduction of new law has sparked tension and the manner with which New Delhi sees Kashmir has fundamentally altered the Kashmiris view regarding India. The nationalist BJP government at the Centre is trying to replicate the Israeli settler policies in Kashmir. In the light of these developments, local analysts are of the opinion that Kashmir may become another Palestine. The youth of Kashmir feel more alienated than ever. In such a scenario, youth of Kashmir could take inspiration from Taliban’s success leading to increase in militancy and militant related actions. As the snow has begun to melt on the frontier areas of Kashmir, keeping these political and social dynamics into consideration, there could be joining of more militant groups across the border. Thus, a boost to militancy in Kashmir seems imminent. In recent months itself there has been a spurt in violence in Kashmir. On April 9, a new outfit called the Resistance Front came into surface in Kashmir, whose five members were killed in the frontier district of Kupwara and interestingly all belonging to Kashmir. The police authorities have suspected its links with Lashkar-e-Taiba (LeT). As Lashkar-e-Taiba is under international radar, Resistance Front could possibly lead to spike in violence. The BJP’s majoritarian politics, its muscular approach towards Kashmir and the changing regional politics would certainly have greater implications for Valley. The road ahead seems bumpy and New Delhi has to deal with disgruntled Kashmiris on one hand and the Taliban government on the other.

Muneeb Yousuf is a Researcher at Academy of International Studies, New Delhi

The views expressed in this article are the author’s own and do not reflect the editorial policies of The Daily Vox.