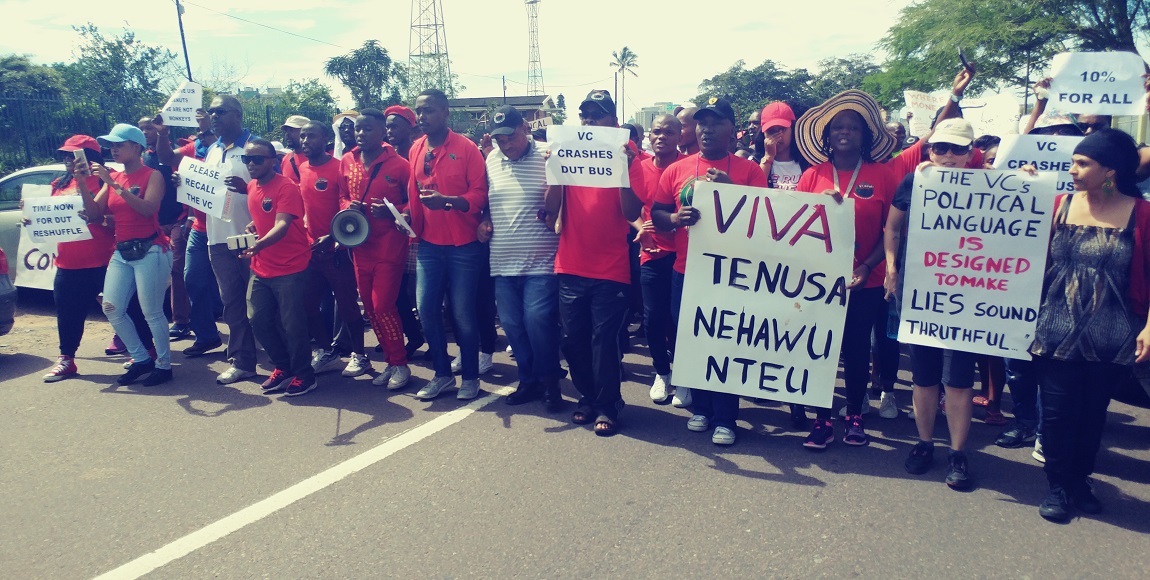 On Tuesday, 27 February, the deputy minister for higher education and trainingÂ  Buti Manamela met with the Durban University of Technology (DUT) management as requested by all the parties involved in the ongoing labour dispute at the institution. The Daily Vox spoke to a few protesting workers to find out about their expectations and outcome of the deputy minister’s intervention.

If the deputy minister will use his authority instead of doing what we’ve been doing all along, there’s a great chance that this whole matter be resolved by tomorrow.

The meeting between Manamela, the national education, health and allied workers union (NEHAWU), federations of unions of South Africa (FEDUSA), and DUT management follows a lockdown that has been ongoing since Monday, January 15. Unions are demanding a fee increment of 10%. According to a statement released on Thursday, February 22 by DUTâ€™s vice chancellor Professor Thandwa Mthembu, the deputy minister was meant to have visited the institution on Tuesday, February 20.

â€œThe deputy minister decided to await the outcome of the engagement between NEHAWU provincial leadership and the chair of the DUT Council,â€ Mthembu said.

We do want to go back to work but we need to meet each other halfway, but it’s difficult when one party is not willing to compromise.

Although the management had articulated that the registration process was going well and had already registered more than 22 000 students on Thursday, February 22. Workers have raised concerns about students who are allegedly being chased out of residences.

As staff, we feel as though our lives are on hold. We are also worried about reports of students being told to vacate residences, because as lecturers we are like parents to these kids.

Manamela expressed concern about the delay to the academic programme, saying: “I’m very worried that students at the university are now affected, that they’ve lost so much time of academic work. Many of them are yet to register and many aren’t certain about the future and for us this is the major concern. We want to see students back in classes as soon as possible.”