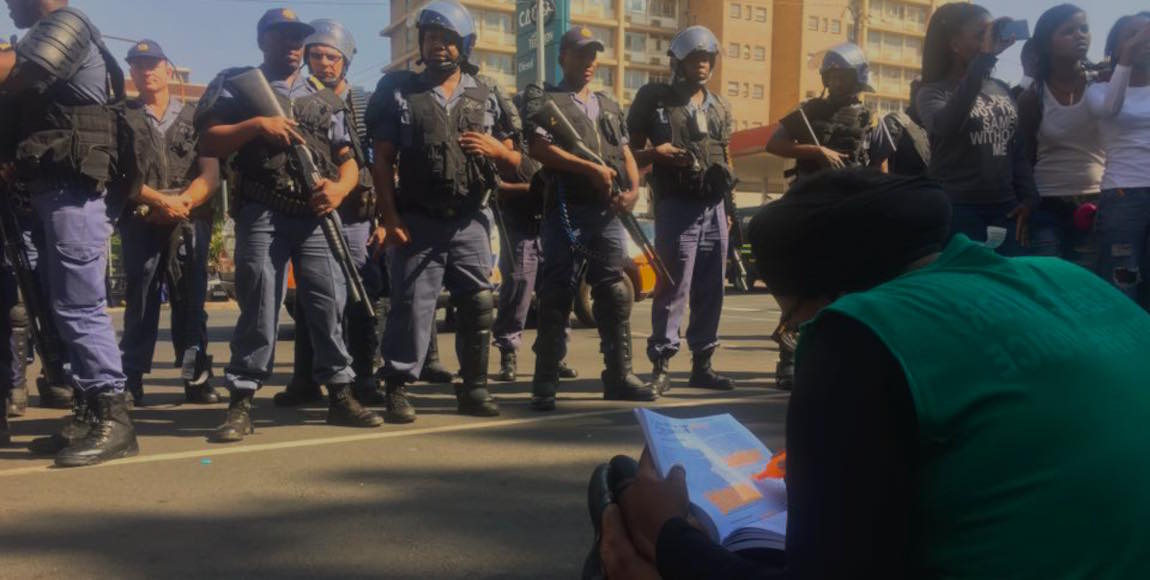 Last year, the Council for the Advancement of the South African Constitution (CASAC) commissioned the Socio-Economic Rights Institute (SERI) for aÂ legal opinion on the restraint of protest in or near university spaces. The request came in light of the often ambiguous conflict that arises between protesters and the legal means that university management use to contain these protests – particularly in the form of interdicts and use of force.Â

The Daily Vox summarised some of the key points to come out of the opinion.

Lawson Naidoo, Executive Secretary of CASAC, told The Daily Vox that they commissioned SERI for this legal opinion specifically because of the amount of experience and expertise SERI have in public order protests.

â€œWe felt it was important to flesh out and clarify these oftentimes complex legal matters – especially where private property is concerned. Weâ€™re not saying that this opinion is sacrosanct, but a vast amount of professional research does go into this,â€ said Lawson.

The point here is that a protest does not need to be silent and passive in order for it to be acceptable. So long as the disruption is temporary and does not break any laws, it falls within constitutional rights.

â€œThe demonstration itself may take the form crowd action that is ‘loud, noisy, disruptive and sometimes dangerous’. It ought to be viewed as ‘a direct expression of popular sovereignty’. For example, it may take the form of anything from burning a member of the University management in effigy [for example an image or representation of them – not the actual person], to singing a struggle song, germane to the purpose of protesting fee increases, which may be likened to a form of oppression,â€ SERI states.

Shouting down, shaming and chirping people who do not take part in a picket might not be nice, but itâ€™s still legal

So long as there is no threat to kill, harm or commit an unlawful act – calling out or shaming someone for breaking a picket line is perfectly legal. So for example, during a picket, calling people â€œselloutsâ€ or shouting and singing at them, as a means of dissuading them, is not criminal. It may or may not be seen as unsavoury, but this is a moral question, not a legal one.

â€œThe line drawn is, therefore, at physical coercion. Non-violent threats appear to be permitted. For example, threatening to ostracise someone who crosses a picket line would be lawful,â€ says SERI.

It is become common for university administrations to seek to contain protests by means of interdicts. While some of this is in an effort to stop unlawful conduct, a lot of the time the scope of these interdicts can be very wide-ranging so as to include disruption that is legal – such as non-violent picketing. An example of an overly wide-ranging interdict might be one that seeks to prevent â€œcalling for the academic programme to be disruptedâ€.

As SERI points out: â€œ… picketing, peacefully and unarmed, a particular lecture may indeed disrupt the academic programme, if it succeeded in discouraging most or all of the class from attending the lecture. This is perfectly lawful, but is enjoined by the language of the interdict.â€

One of the most popular examples of the a this is when an interdict is addressed to â€œThose Persons Engaging In Or Associating Themselves With Unlawful Activities On The Applicantâ€™s Campusâ€.

Interdicts addressed in such a vague manner â€œbreach the legal principle that parties to a court order should be properly identified, and the principle that a cause of action must be made out against particular defendants and respondents.â€ The reason for this is because vaguely defining parties makes it impossible to tell who exactly is being identified by the interdict and what exactly the â€œunlawfulâ€ activity theyâ€™re being accused of is.

The effect of this that it leaves room for ambiguity as to who the interdict applies to, and for what. Often this means that it is up to the university to decide against whom and when the interdict is to be enforced – which effectively gives them the power to police protests as they see fit – even targeting people irrespective of whether theyâ€™ve behaved criminally or not.

Interdicts against vaguely defined parties can also be seen to infringe upon studentsâ€™ freedom of association. For example, students innocently joining in a peaceful protest that later turns violent, may find that theyâ€™ve fallen under the terms of the interdict – merely by association – even if they had no intention of partaking in or encouraging any unlawful action. This undermines the the â€œGarvis exceptionâ€ which says that a bystander present at a protest cannot be held liable for the unlawful actions of others present at the same protest – so long as the bystander was not directly involved in the unlawful activity.

You can only be legally prosecuted for a mass gathering, without permit or prior notice, under certain conditions.

The Gatherings Act is not straight-forward and makes certain provisions that are useful to be aware of.

For example, you do not need to give prior notice or get a permit if a demonstration is of 15 people or fewer. Also, if a gathering was not planned prior – is spontaneous – then no permit or prior notice is required.

And even if a gathering has more than 15 people and was planned prior: it is only the individual that organised the gathering who can be legally prosecuted. This means that the rest of the crowd who were part of the protest cannot be arrested for simply taking part.

Registered students are, in principle, allowed to gather and protest in university spaces so long as a university does not have a policy restraining it

The Gatherings Act applies to spaces such as public roads, and does not apply to universities at all. This means students are allowed to gather en masse to demonstrate at their universities, so long as it is non-violent and they are not holding weapons. The only issue here comes in where a university has a code of conduct or some policy that limits protest in some way.

So for example, the University of Johannesburgâ€™s student regulations state that a student must get permission before having a meeting or demonstating, at least five days before it is planned. UJâ€™s students are implicitly bound by this policy by virtue of being a registered member of the university.

This means students who do not adhere to such a policy are subject to disciplinary hearings which might possibly result in suspension, community service or expulsion. The university may also file for an interdict against students breaking such policies because this is, in effect, a contractual agreement that the student is breaking. If the interdict goes through, students who intentionally contravene the universityâ€™s policy could be arrested.