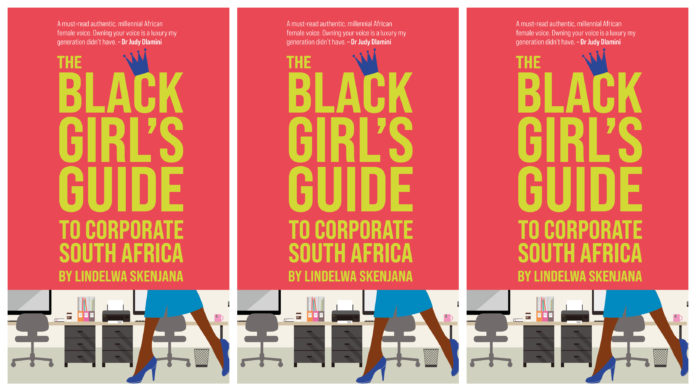 In this timely memoir-/­guide, young corporate professional Lindelwa Skenjana shares insights from her own experience and those of other black women at various stages of their careers. Her performance review of the corporate world lays bare many pitfalls – from racism, sexism, ethnic chauvinism and ageism to sexual harassment – that require savvy navigation. When technical expertise and hard work are not the issue, how do black women support each other to success?

This extract was provided by NB Publishers.

The human condition is an interesting one, and there was something about the workplace that strikingly resembled school politics: the cool kid, the bully, the teacher’s pet, the loud kid at the back, the shy, intelligent kid who doesn’t speak much. As Pira Kumarasamy states, ‘[i]n the workplace, it’s a common belief that the person who speaks the loudest, the most frequently, and with the most conviction is the smartest person in the room’.7 In the school setting, whereas the shy, academically inclined kid accumulated accolades and the audience linked to these, everyone wanted to be the cool kid. For a very long time in my career, much as I was in school, I was the shy, smart kid. I stayed in my corner and did what was expected of me, being extremely hard on myself. I always wanted to achieve more and more, silently. This was something

Mama had instilled in me – always aim for excellence, never be satisfied with average. I would come to learn that this was never going to be enough. At some point it is no longer about the technical knowledge or degrees you possess. It is about who knows that you possess that knowledge and value for the organisation, what power they have and the reputational currency they can use to influence how you are seen and received in the greater organisation.

A senior black male executive in a department town hall conversation once said, ‘I don’t care how good you are at your job, if I don’t know you or know about it, then how will you get the recognition you deserve? If you don’t make noise about your achievements, who will care?’ This concerned me for a long time. I thought to myself, do I need to change who I am to survive in this corporate world?

Do I need to develop a boisterous and self-aggrandising personality as a mask and retreat to my quiet ways after hours? The thought in itself sounded ridiculous. He was a loud, self-assured, charismatic character who would work the room. This was my first year of working and already I was starting to feel a little defeated. Not only are you expected to be technically sound at what you do, you need to shout it from the rooftops as well? This felt daunting for me, after being raised in a black family where you are taught humility and ubuntu from a young age.

As a black girl child, you are taught that, even when you have house help, you welcome guests from the driveway, offer them something to drink, and serve them on a tray before you disappear and allow the adults to continue with their adult conversation. You are taught that adults are to be served and listened to, that adults are not your friends. Imagine having to reconcile your upbringing with – or, rather, de couple it from – what the workplace requires you to be in order for you to be successful. Unless this colleague was raised in the diaspora undergraduate, I found it very strange that he expected younger black professionals, particularly women, to act in a self-promoting way – which, I would later learn, forms part of the success currency in the workplace.

A black male colleague and friend once said to me, ‘You are way more qualified than me, friend, you have an undergraduate degree, an honours degree, a master’s degree and a number of other qualifications from credible institutions. And yet I am more senior than you because I use my male currency. I wear powerful suits, I am loud, I went to school with some of the senior white executives, I am welcome in the powerful male inner circles that you probably don’t even know exist.’ This introduced to me the dynamics of male privilege in the workplace, which also needed to be navigated. In this regard, I have made a few male allies who are my peers age-wise, who are always willing to guide, give advice and lend an ear whenever I feel stuck or troubled.

It is almost like having big brothers. They provide logical advice and are never emotional about any situation I unpack with them. They have been very supportive and reliable; I have been grateful for this layer of support.

However, what I have experienced is never to assume the older black executives have your back in the workplace, purely because they are older and black. I have actually found older non-black executives more approachable, and easier to talk to and get into discussions with about your dreams and wishes. There is almost an air of impatience with older black executives, an unspoken ‘I worked hard and had to figure things out the hard way’ type of attitude – and ‘therefore you should too’. This leaves young black women with fewer outlets for support.

An article in the Harvard Business Review about men and women in the workplace corroborates what my colleague and friend had said to me: ‘. . . women are less embedded in networks that offer opportunities to gather vital information and garner support. When people lack access to useful contacts and information, they face a disadvantage in negotiations. They may not know what is on the table . . .’.8 There seemed to be a level of comfort within organisations, with decision makers hiring people who went to the same schools and/or universities as they did for a ‘culture fit’. This practice lends itself to other exclusionary practices because it brings in the matter of class.

As women in the workplace, we come from different educational and cultural backgrounds. I would later be told by different black female bosses as a means to help me assimilate:

• Do not be quiet in meetings. You need to say something.

• Do not be a post box – never receive work from a supplier and pass it on without scrutinising it, dotting every ‘i’ and crossing every ‘t’.

• You are too polite – you need to be more aggressive.

This will help with your progress and success.

These lingered at the back of my mind as I continued to grow in this system. Nine times out of ten, the woman who was considered to be the bitch, the difficult one, the aggressive one, always seemed to be the woman who held the most senior position.

Nice, kind, sweet women hardly ever made it to the top. Later, only once would I personally experience a black female boss who wore both her feminine and masculine energy in a balanced manner. Another such woman I observed only from a distance. My black female peers who also displayed aggressive, no-nonsense, call-a-spade-a-spade-type characters would also rise to the top more quickly, and at younger ages. What I had been told was no lie – it was evident all around us, and was encouraged and rewarded. When someone barks, you must bark louder – that is the culture that is rewarded in corporate.

About the author: Lindelwa Skenjana is an award­winning professional with over ten years experience in various sectors of the corporate world. She holds a master’s in ICT’s for Development from the University of Manchester. Lindelwa is a founding member of Mbewu Movement, a young women’s dialogue forum. She lives in Johannesburg.