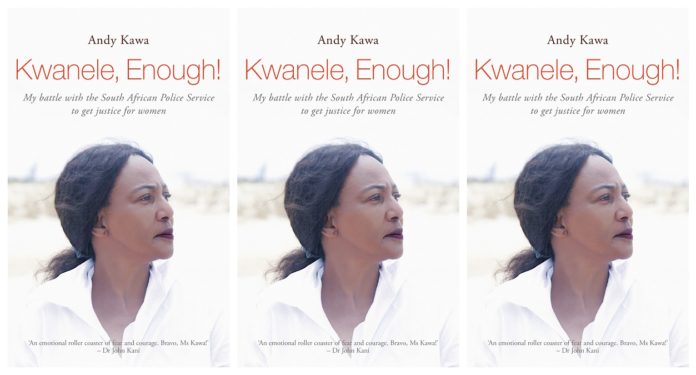 Kwanele, Enough! My Battle with the South African Police Service to get Justice for Women is businessperson Andy Kawa’s story. In 2010, she was abducted and assaulted by several men. Her attackers were never caught. Kawa successfully sued the police for failing to properly investigate the attack. This is her story.

After the three of us – Dad, Mum and Thembi – had finished our farm stall lunch together, I had an important errand to run before Thembi and I were due to catch our flight home. Signing the offer on a house for my mother was the perfect way to end my trip and my mood was joyful. After leaving the estate agent’s office, a stroll on the beach on a hot summer’s day would top everything off . . .

Thembi was relaxed and in a happy mood too. ‘It was a sunny day, and I was spending a lovely time with Andy’s mum and dad. It reminded me of the days I used to visit my parents in Sebokeng, when they were still alive. It was after 2 pm and we were now waiting for Andy’s return. Daddy asked us to move to the garden so he could enjoy the breeze. He sat on a chair under the fig tree and we stood around. Mama was a bit restless because she was going to drop us at the airport. I was also worried about leaving on time so that

she didn’t get caught up in rush hour traffic.

‘I called Andy’s mobile but it immediately cut off. I started calling every five minutes. Her phone remained unanswered and I got worried because that wasn’t typical of her. Daddy thought she had decided to leave the following day and was catching up with friends and that we would leave on the first flight on Friday. He was the only one not really bothered, whilst I was getting frantic. I knew how important the meeting Andy was attending the following day was. By then Mama was pacing round the garden. I could tell she was really worried. She started praying and calling PE friends to find out if anyone had seen Andy.’

Mum got hold of my cousin, Mazwi, who is a butcher in New Brighton. She knew we were close and so she thought that he was the person most likely to know where I was. But Mazwi was unable to help. ‘She asked me if Andy is with me because she was supposed to leave to take a flight at five o’clock that day. I said well I didn’t see her since she went to Port Alfred the week before. She called again before I closed my business and told me Andy had not arrived home and she missed the flight. I said I would contact the police after closing my business.’

Back at my dad’s place, nobody could remember my car registration number, so Mum and Thembi headed back to my mother’s house in Coega to find the licence papers, and call the police. It was already getting dark.

To Thembi’s surprise, two police officers, one male, one female, arrived at the door within an hour. Such a prompt response is unusual in South Africa.

‘They felt it was too soon to report Andy missing,’ Thembi said, ‘given the short time that had elapsed. I insisted. We had missed our flight and she had an important meeting in Johannesburg the following day. We gave them the car registration number, her description and a description of the clothes she was wearing. I told them she had gone to meet an estate agent, but that I wasn’t sure of the location. I was sure she’d been robbed while house viewing, but I kept that to myself. The police left and informed us that they would contact us if they had any news.’

In the meantime, after closing up, Mazwi went to the New Brighton police station to report me missing. He called 10111, the number for the flying squad, from there. The only information he had to give them was that I was driving a red Honda and that I was wearing a white linen top and trousers.

Thembi began phoning everyone she could think of. ‘I called Lullu Tshiwula, Andy’s friend in Cape Town, to check if she may have visited Koko, Lullu’s husband, in PE that afternoon. The answer was negative. Lullu’s daughter asked a friend at Vodacom to search their customer call records, to determine who was the last person Andy talked to. I was given two cell numbers, an 083 number, which Andy texted at about 2.15. The other was Pulane, who called at 2.30. That was the last activity to Andy’s phone.’ My mother did what she does best – she prayed.

‘I prayed to God to give us a revelation. We didn’t think of trying to go and find her. I think that was God’s plan, because if we had gone on our own to look for Andy, we would have failed. I said God, take care of her. From the minute this thing happened I thought, this is not for me to handle. It is above my strength. Leave it for God.’

My family is religious. Church has always been part of our lives. My parents were active members of St Patrick’s Presbyterian Church in New Brighton, where Dad was the treasurer for over twenty years. I have fond memories of going to Sunday school and playing in the manse while Dad had meetings with the minister, Reverend JJR Jolobe. So it was natural to call on God in times of need. Having placed my safety in Him, my mother went to bed, telling Thembi she felt certain that, when she awoke, I would be found – and not at a mortuary.

Even so, Mum knew I might be in trouble.

‘The spate of rapes and murders of women and children being reported every day in the newspapers was alarming. I knew Andy was in trouble. However, I had this firm conviction that we would find her alive in the morning. At the back of my mind I knew she would be hurt, but also thought we would find her alive, not dead. I told Thembi we would go and look for her at the different hospitals in PE.’

The book launched on October 23 via a webinar. Published by Tafelberg, the book is available in-store and online.